Posted on August 28, 2012 by John Boyd Macdonald| Leave a comment

I’ve been reading a little about the functions and mechanisms by which ‘signs’ (in the broadest sense of the word) operate. Icon, index and symbol, and the often impenetrable language of the semioticians. But some of the most obvious and bluntly direct signs are all around us in the form of advertising in public spaces as posters, advertising hoardings and billboards. In public urban spaces they are so ubiquitous that most of the time we don’t even notice their presence.

I have been looking at a lot of them lately, both in downtown locations and alongside highways, and I’ve been overwhelmed by the sheer number of them. Normally, they reach us (if at all) as just an element of background visual noise. Our gaze, the gaze of the contemporary citizen-consumer, both sophisticated and distracted, is usually directed elsewhere. Combating our neglectful tendency to ignore, these signs vie for attention through size, shock, visibility, repetition or saturated presentation. Through their style or location they attempt to reach (though ‘target’ is perhaps a better word for it) their desired audience/market segment.

Usually they are straightforward, even crude, in their expression of a simple message from the source (advertiser) to the recipient (viewer). The message is: “You need/want this product. Buy it.” Or:; “Change your behaviour or attitude take action in line with the advertiser’s wishes.” 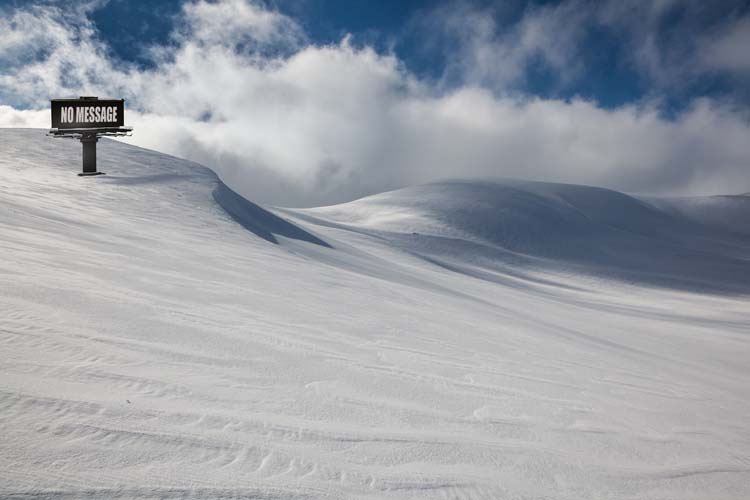 In this image of a standard (14′ by 48′) roadside image in a wilderness snowfield near Mt Kosciuszko, I wanted to make the billboard to itself become visible as an object, rather than as the almost-invisible vehicle for delivery of messages to a mass audience.  In a way it’s a McLuhan-esque effort to put the message to one side and focus solely on the medium.  I also sought to ask two questions of the viewer.

Firstly, if removed from its audience, and relocated in an environment without viewers, what happens to the sign? Does it continue to have meaning? It retains a physical presence and the capacity to express a message – but can it be said to have a message if it has no audience? This resembles the old pop-philosophical question:  if a tree falls in a wilderness forest with no-one there to hear it, does it make any noise?

It could of course be said that the billboard sign does have an audience i.e. us, the viewers of the reproduced photographic image. However we view only a picture of the billboard and its message. It is a ‘sign-within-a-sign’, or a ‘sign-about-a-sign’ i.e. a ‘meta-sign’. It is  at least one degree of abstraction removed from the ‘real’ sign and its message. (In fact it is even less than that, as it is only a contrived Photoshop 3D model of sign,  an ‘object’ which has never had existence in physical space!)

And the second question is: what might this then reveal about the mechanisms by which these objects function in their conventional human environment?