Posted on August 28, 2016 by John Boyd Macdonald| Leave a comment

Now that we’ve left Kalimantan (at least for the time being), it’s an opportunity to catch up up some photos from other places. So I’ve been (finally) processing photographs taken in Singapore last December, when we were there on a ‘visa run’.

What struck me about the images is that most of them were composed to feature reflected light and/or odd perspectives. It wasn’t a conscious decision, and I hadn’t even noticed it until I started processing the photos. Perhaps it was the contrast with Kalimantan, where there are fewer opportunities for that kind of image – or perhaps I was just feeling obtuse… 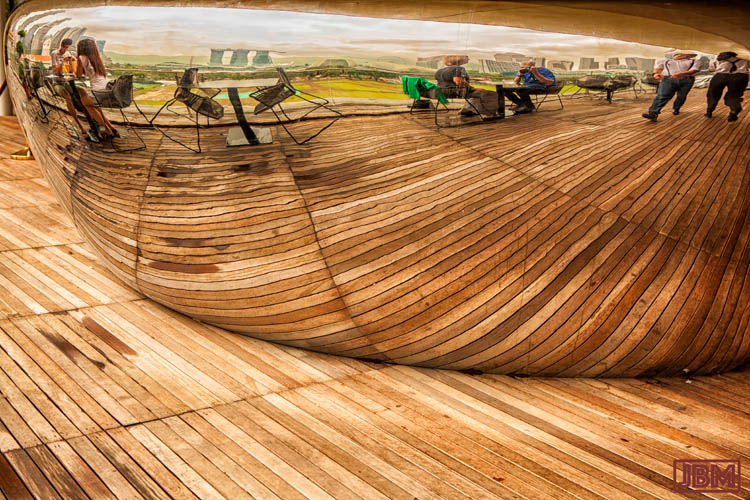 Here’s Karen and I (and other diners) having lunch in the ’Smoke and Mirrors’ bar at the newly opened National Gallery Singapore, housed in the former City Hall and Supreme Court buildings. The Gallery is a SG$450,000,000 blend of colonial and highly contemporary architecture, which (often) works really well.

The bar is constructed with a single huge curvy piece of stainless steel – which is said to weigh 400kg. It makes a great way to feature the panoramic view across The Padang to the Singapore waterfront and the unique Marina Bay Sands resort.

We had fish and chips. 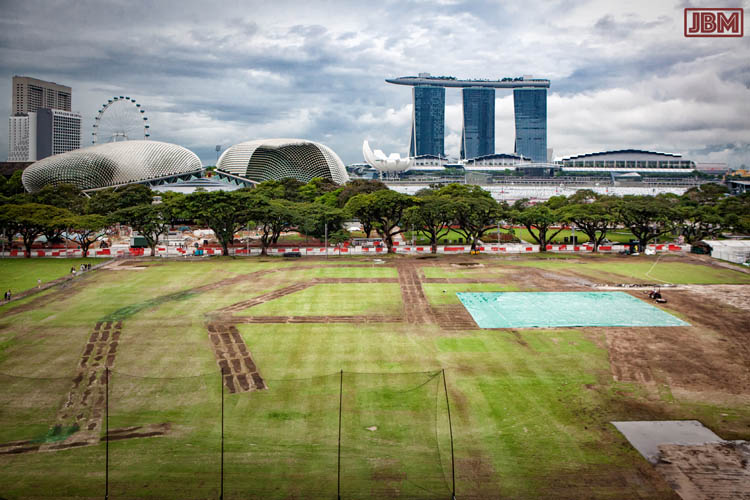 Here’s a more conventional perspective on that same view – from the same place. 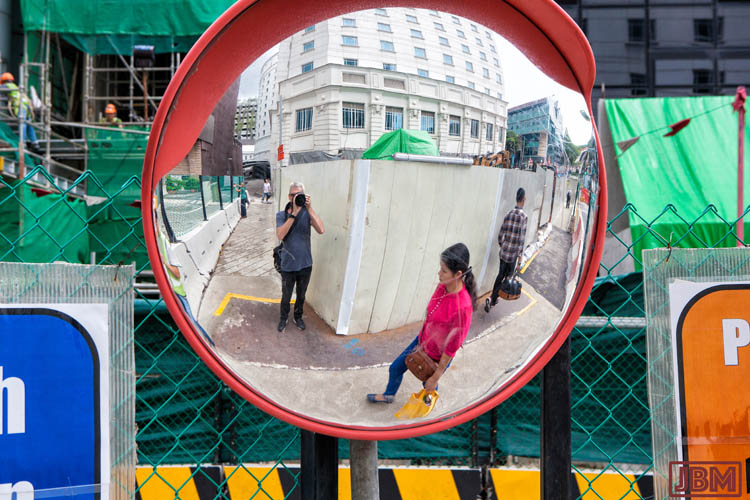 A fisheye mirror on a bend in a pedestrian laneway, with a construction site behind, made for an interesting (though perhaps unoriginal) composition. Did you spot Karen over my right shoulder in a green blouse, also making photos? 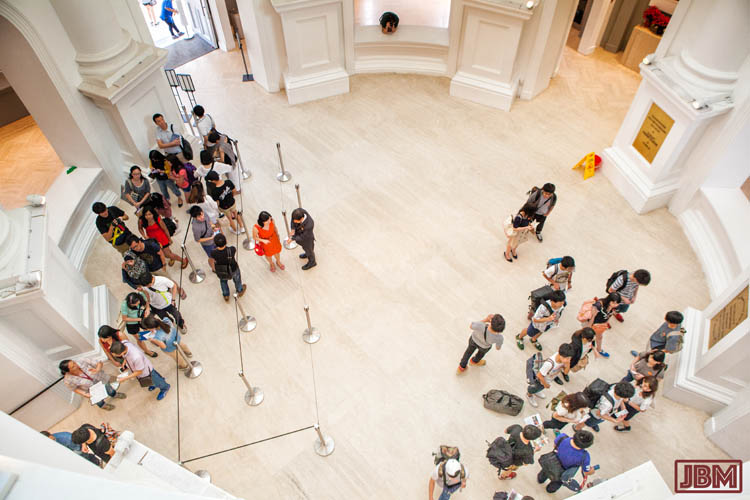 Another, quote different, circle. Looking down into the entrance hall of the National Museum of Singapore from a balcony on the next level up. 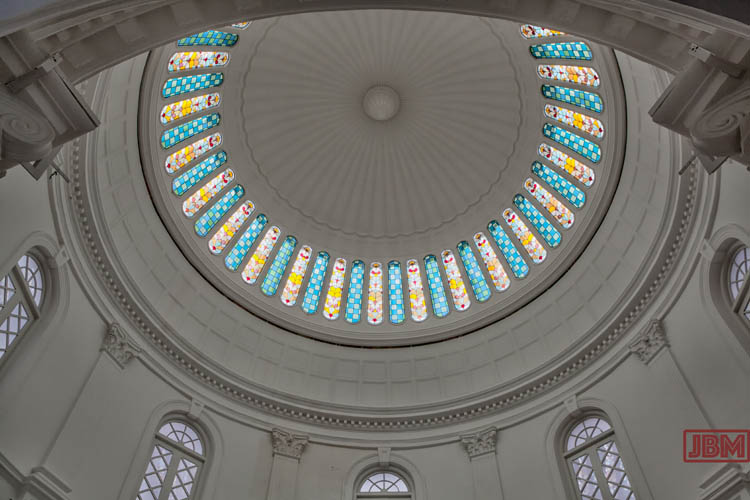 And from the same position, a third circle (actually a hemisphere!), looking up into the magnificent dome. The original building dates back to 1887, when it was built as the Raffles Library and Museum. Recent extensions have more than doubled the floor area of the Museum, but the very modern new parts have been (almost) entirely concealed when viewing the building from outside.

The stained glass in the rotunda was painstakingly restored in 2004-5. All 50 of the curved glass panels were removed, and glass, lead and joints were replaced or rectified as needed. The result is beautiful. 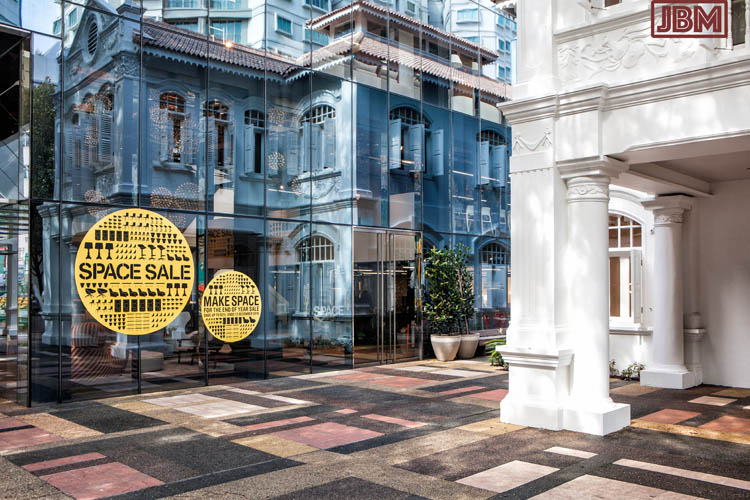 As Singapore transformed into the modernistic glass-and-steel metropolis that it is today, it has been moderately successful in preserving some of the better architectural examples from its colonial past. This juxtaposition of past and present can be seen everywhere. 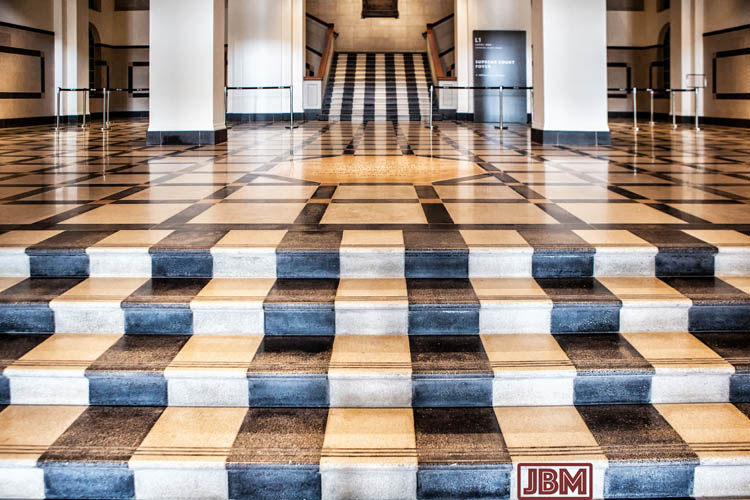 Entering the new National Gallery feels like being invited back to a more ordered, graciously elegant past. 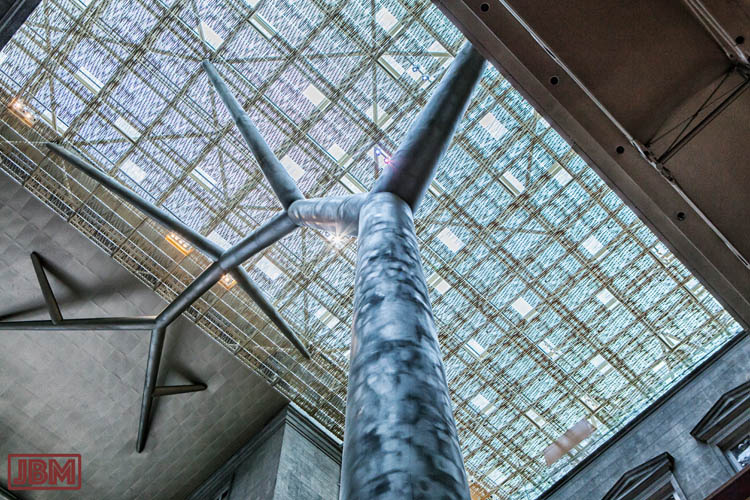 But once inside, it turns into a futuristic, techno-organic world. Very different, and the contrast is a bit overwhelming at times! 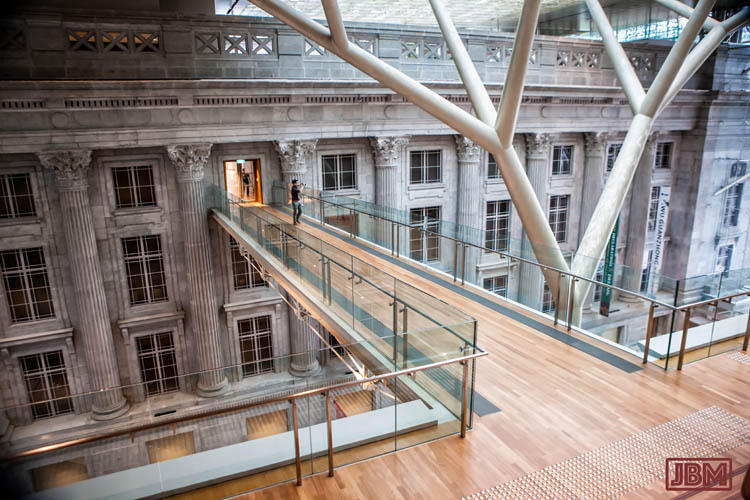 The joins between the two architectural ages are interesting – but not entirely seamless. 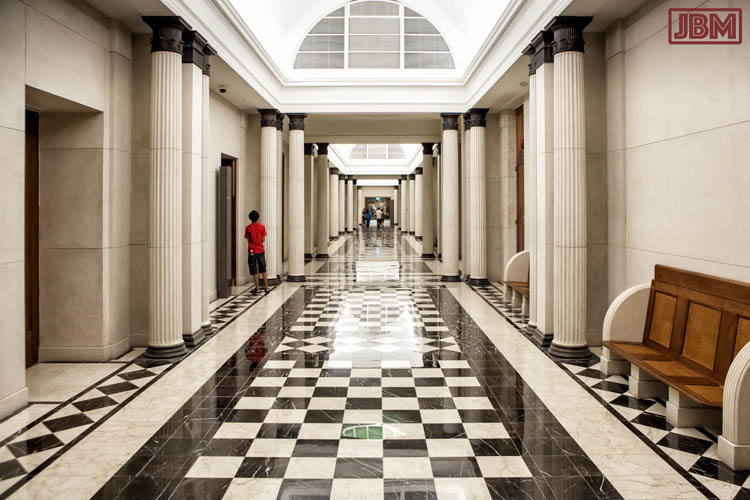 I think I most liked some of the classical-looking parts of the building, where you couldn’t be sure whether it was very new or really old. 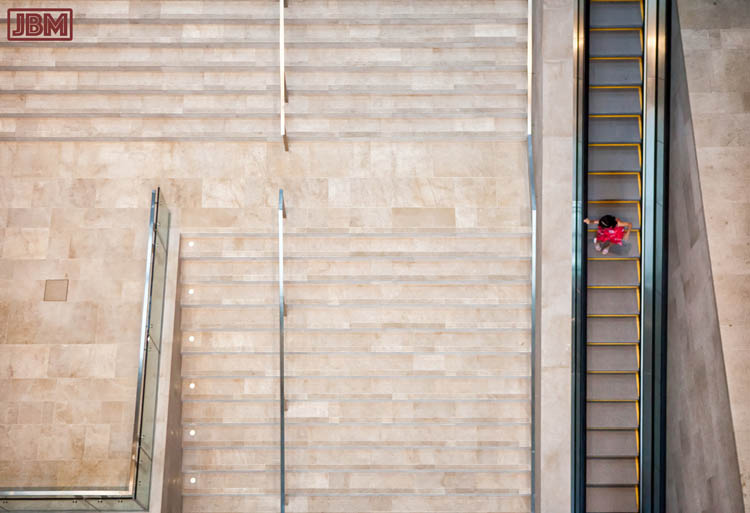 There are some quite dramatic, and sometimes confusing, perspectives when looking down from high up in the atrium spaces. It’s a bit Escher-esque at times. 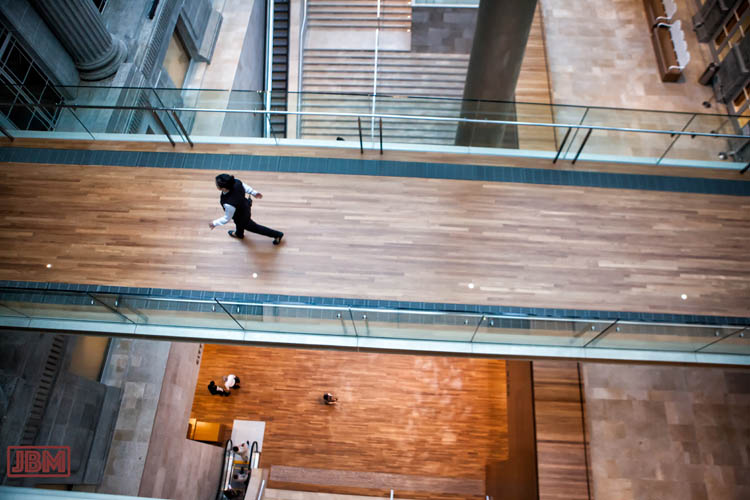 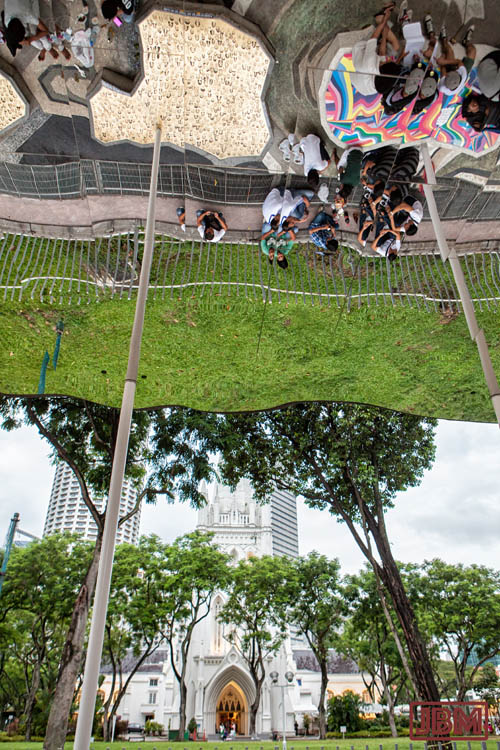 In front of the Gallery main entrance, and leading across Coleman Street, through the grounds of St Andrews Cathedral toward North Bridge Road, is wonderful covered walkway. The high ceiling of the walkway is fully mirrored. 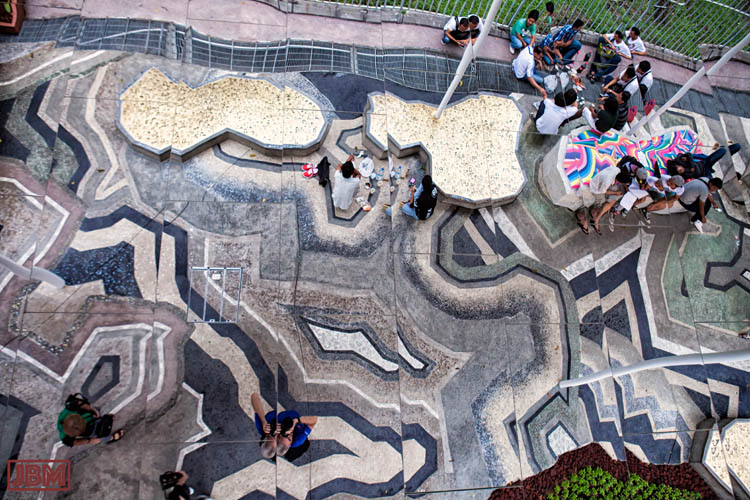 I found it difficult to walk along there without tipping my head backwards to marvel at the kaleidoscope of fractured reflections above. 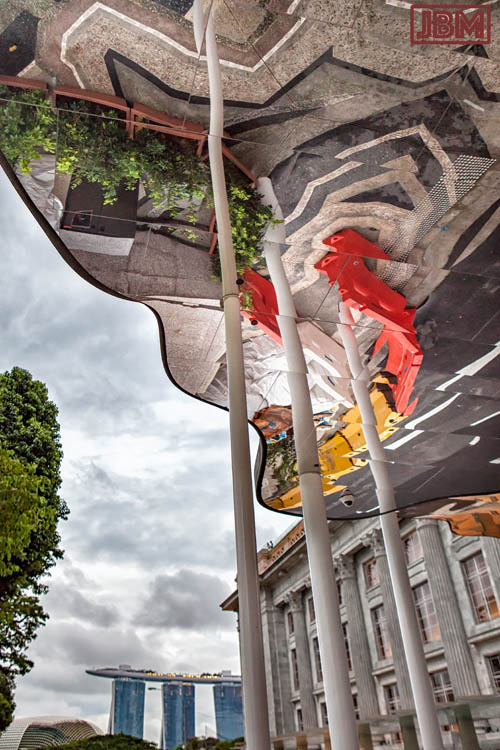 More of my Singapore photographs can be seen on my website by clicking on this link.