Posted on January 8, 2015 by John Boyd Macdonald| Leave a comment

Just two days after our November visit to Tewang Rangkang to help with the communal Dayak rice planting, our friend Lelie’s grandmother (Nenek) passed away at her home in the village, after suffering a stroke. The family decided to hold the full Tiwah funeral ceremony immediately, rather than waiting (often up to a year or more) as is usual in other places. We were honoured by being invited to attend, given food and accommodation for the three days that we were there, encouraged to participate in all ceremonies, to ask questions and to make lots of photos.

I put off writing about it because it was pretty intense, hard to try to summarise in a few words and photos (and I have exactly 999 photos to choose from). It was also – as well as a ceremony, a performance, and a party – a time of grief for a family that has been very kind to us, so I wanted to be sure they were OK with the text before sending. And, with the ritual slaughter of a buffalo, two cows, four pigs and a number of chickens, some of the details are …  a little grisly. So, rather than try to string together a narrative, here’s some selected pictures and a few words which try to explain them. (And I haven’t included the more disturbing pictures.) 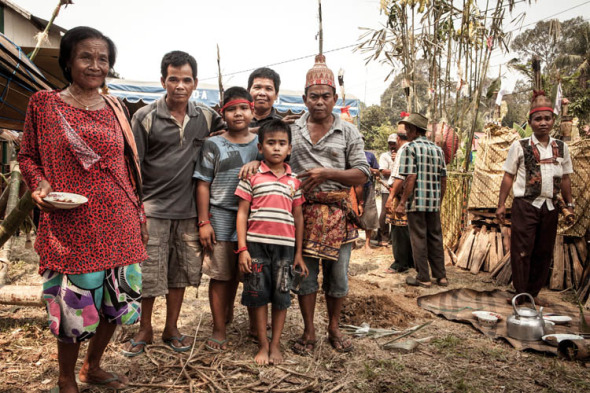 The traditional religion of all the Dayak peoples is known as Kaharingan, though practices and beliefs vary across different groups and regions of Borneo. Officially, it’s called ‘Hindu Kaharingan’, because everyone in Indonesia must register as belonging to one of the government-recognised religions (Islamic, Buddhist, Hindu, Protestant, Catholic, Confucian). But apart from the name there’s not a lot that’s recognisably Hindu about it. It has more in common with the pre-Hindu and pre-Islamic beliefs of much of the rest of Indonesia.

It’s an animist faith, with a strong belief that the spirits of the dead need practical assistance to make the journey from earth to heaven, where they will live with their family members in ’the Prosperous Village’. The hugely complicated (and hugely expensive) ceremonies of the Tiwah are intended to help the soul on that journey, and supply them with food and supplies so they will be comfortable when they arrive. Officiating over the proceedings is a Basir (Babak, at the right of the picture above), a shaman who is an expert in the rituals of Kaharingan. 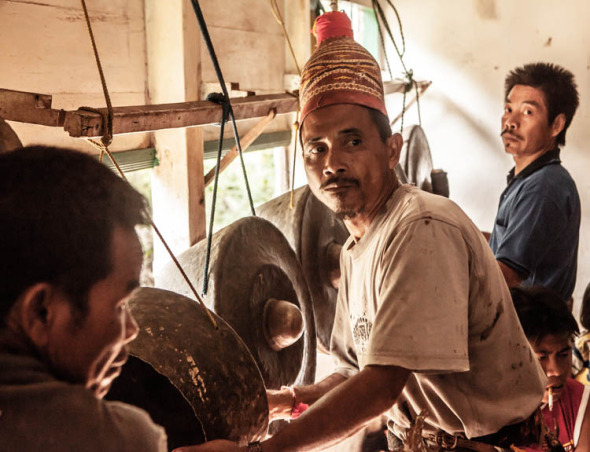 Nenek’s house is quite traditional in design and fitout. No chairs, tables or beds, but with a full set of gongs (five large, four small) and drums for performance of ritual music. The gongs played almost non-stop while we were there, day and night. The performers (all male) would change over regularly, with just about everyone, young and old (yes, even me) having a turn. It was strangely hypnotic and soothing in a clanging techno-rhythm kind of way, and the music is still bouncing around my head. 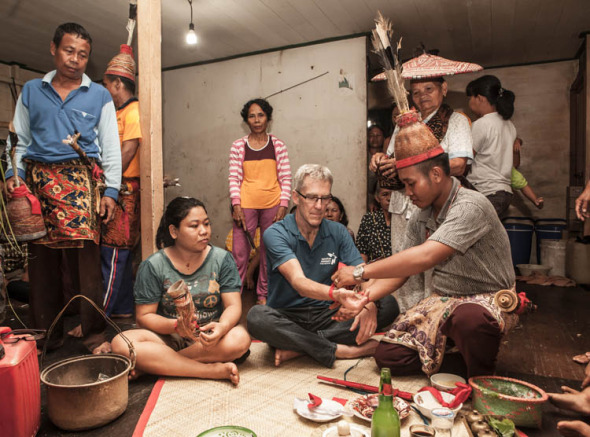 We were invited to become honorary members of the family for the duration of the ceremonies (and for the following week), a select group amongst the 250 or so people at the Tiwah. That required a short ritual with the Basir (and Lelie beside us), and a red band of fabric with a coin inside tied around the right wrist (“Don’t take it off until 4pm next Saturday!”)  It also meant that were expected to participate in all the ceremonies (including, we were surprised to find out later, the ritual spearing of the buffalo and cattle prior to their slaughter). 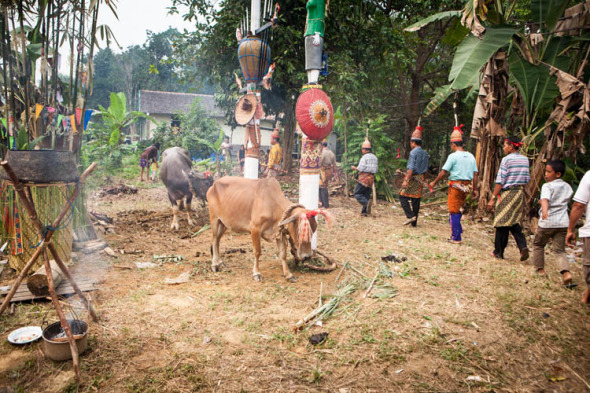 Two large wooden posts (sapundu) were erected in the yard. One unfortunate black chook was carefully placed at the bottom of the hole before the heavy ironwood post was dropped into place. Fresh-cut logs were lashed together with rattan to make a holding pen for the pigs, which were (yes) ‘hog-tied’, and several chickens were tied up outside. None seemed to be particularly pleased with the arrangements.

The cow and the (very expensive) buffalo (kerbau) were yoked to the poles, each held by a heavy collar made out of rattan. They were tied up there overnight, and given nice food, kind words, massages and offered prayers. 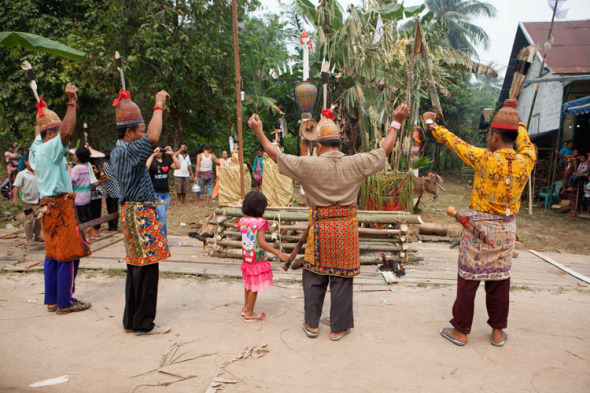 The family members (plus the basir and us) assembled on a number of occasions in a circle around the sapundu. With the gongs playing loudly, we would proceed, facing in towards the centre, repeating the same set of actions. It was my kind of dance: very simple.  You raise both hands over the head, lower the arms with palms facing downwards, then make a sort of sideways pelvic thrust motion, then take a long step to the right. Repeat for 20-30 minutes, with periodic pauses for two low chants and a loud falsetto ‘whoop’! 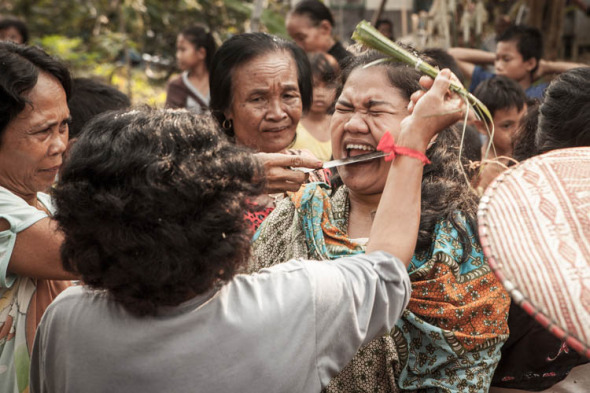 At one point in the circle, you stop for three women to attend to you; one puts an oily drop on your neck, chin and forehead, another sprinkles some coconut water and rice grains on the top of your head, and the third rubs two knives together over your head before putting one into your mouth (blunt side!) for you to bite on. You go through this routine many times, and end up with a lot of rice in your hair! 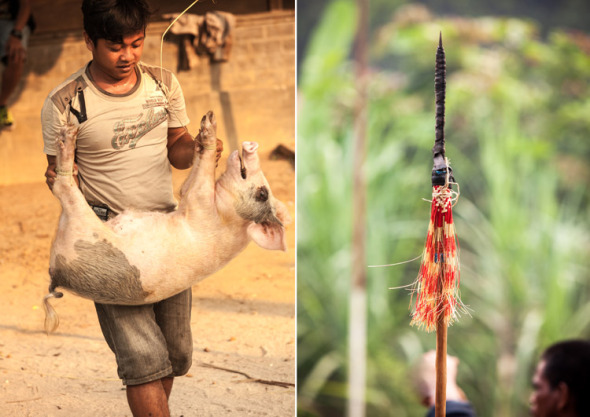 And then next morning the cow and buffalo were speared (on the left side only) by each member of the family in turn. Although it is an honour to be invited, we decided not to participate. When each poor beast collapsed, after 30 minutes or so, it was tied up and dispatched with a large knife. 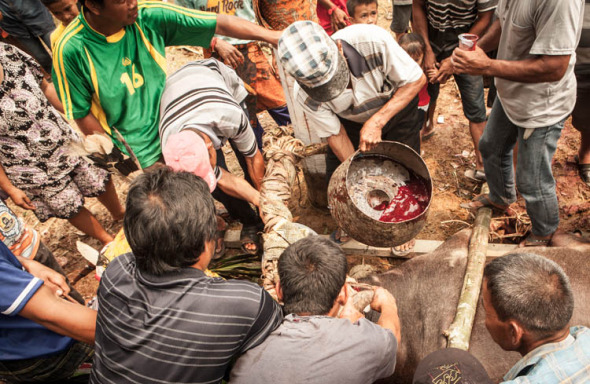 Suffice it to say, there was a lot of blood. Sacrificial blood is considered to have great power and to have a very purifying effect, so a number of people were keen to collect it or to bathe their feet, hands or faces in it. 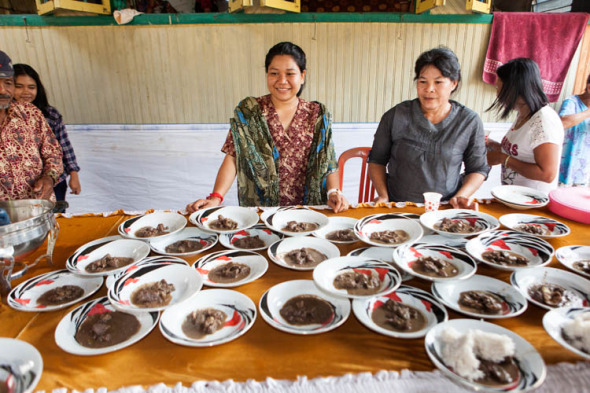 The complex logistics of keeping all 200+ attendees fed and comfortable over the days of ceremony must have been challenging, but as always seems to occur here, everyone just pitches in and divides up the work amongst themselves without any obvious project management. And meals kept being prepared and served up. In this photo our friend Lelie is doling out plates of fresh (VERY fresh) beef stewed in coconut milk. 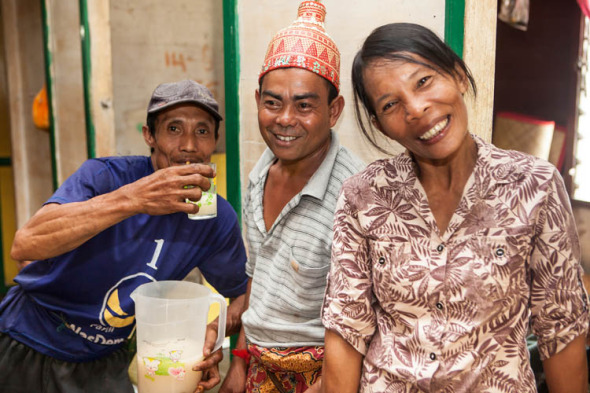 There was rather a lot of tuak and baram (homemade rice wine) consumed during the ceremonies. Actually, a great deal of tuak. The tuak was carried around in a number of containers: kettles, tubs, and even this ‘Hello Kitty’ jug. But there were only a couple of glasses, which were refilled and passed around more-or-less continuously. 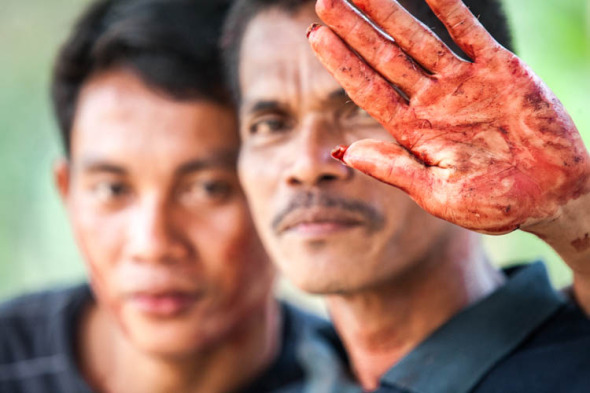 For some reason I was a very effective magnet for the intoxicated, and got befriended by a number of amiable and largely incomprehensible blokes. But there was never any hint of any anti-social behaviour.

The fellow on the left above was closely involved in the business of sacrifice (as his face and hand attest), and the other guy is a keen handphone photographer. They were both sometimes quite intense. 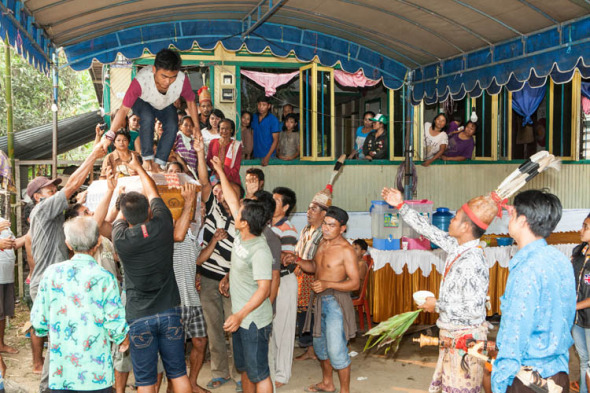 Nenek’s coffin remained in a room of her home until the third day we were there. During that time, she was brought meals and drinks of water and coffee, even sirih (betel), which were placed beside her a she lay in state. After the coffin was finally closed and carefully brought outside on the shoulders of family members, Berry (one of the grandchildren) was chosen to be hoisted up to walk the length of it and jump off the end (three times!) This signifies everyone ‘letting go’ of their attachments to the one who has died. 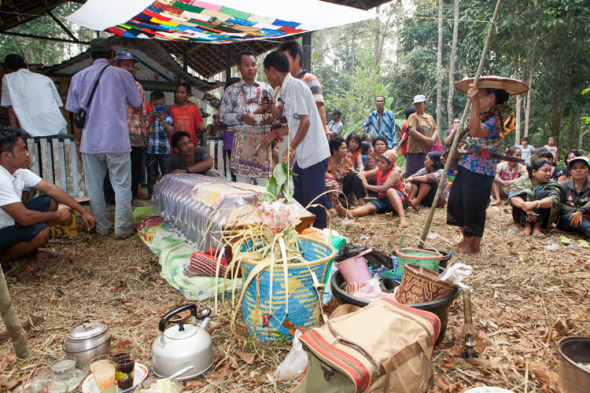 In a small clearing in the forest stands a little wooden ‘house’ (sandung), erected four years earlier to hold the coffin and remains of Nenek’s husband. Before Nenek joined him inside, a small ceremony outside prepared all the material objects that were to accompany her on the journey to ‘the Prosperous Village’ i.e. heaven. There was a little bag of her clothing, baskets and small household items, snacks and two glasses each of coffee, rice wine and water (one for her, one for her husband). Her other clothing and linen was piled up and burnt nearby, so that her spirit wouldn’t be tempted to come back home. The sacrificed animals would have already joined her in the spirit world. 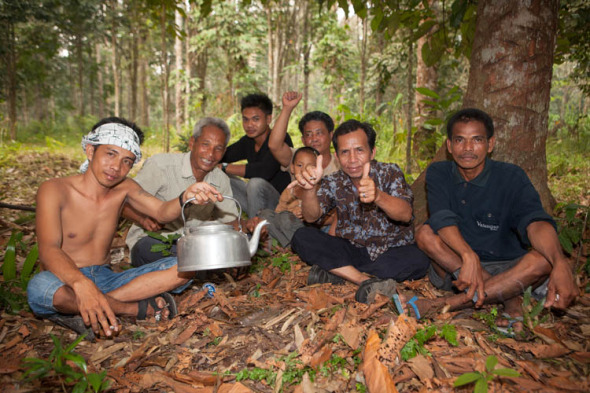 The climax of the Tiwah ceremonies was over, but the ceremonies continued for at least another week (that we know about). Meanwhile there was still plenty of tuak and baram to share around.

The whole Tiwah process is really expensive and, like in Bali, it’s common for families to co-host Tiwah for a number of the recently deceased, so as to share the funeral costs. It’s also becoming less common as so many Kaharingan Dayak people have converted to Islam or (more usually) to Christianity. Interestingly, however, a lot of the converts will still hold or participate in Tiwah ceremonies, saying that it reflects their Dayak identity and tradition (adat), and is no longer a matter of religion (agama).