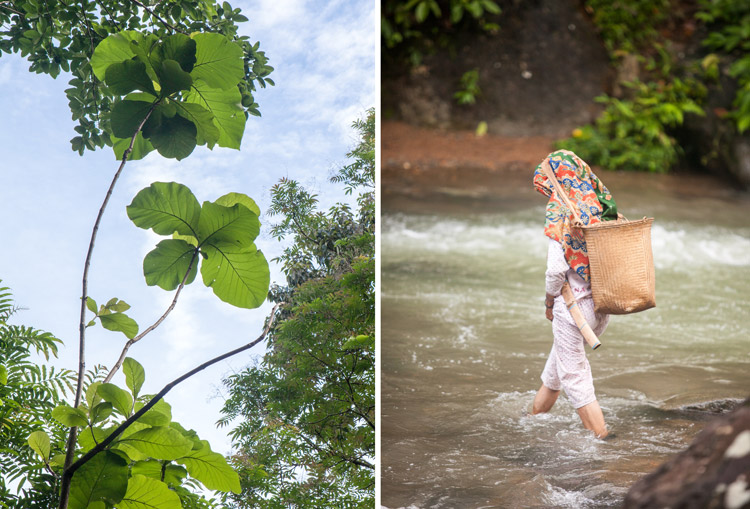 Over the New Year holidays we went to the neighbouring province of South Kalimantan (Kalimantan Selatan, or ‘KalSel’) to do some walking in the Meratus Mountains near the town of Loksado. It’s about nine hours drive from here, but we stopped over in Banjarmasin (the bustling capital of KalSel) for a couple of days en route. 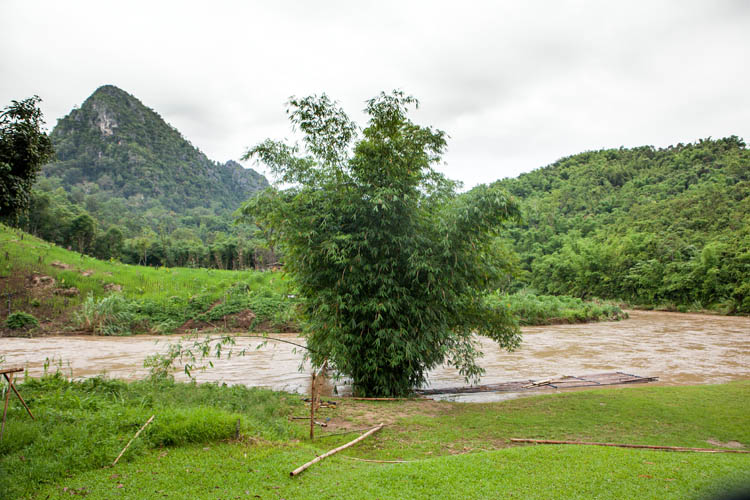 After four months on the peat swamps and sandy plains of Central Kalimantan, it was nice to get up into some hilly country, still mostly forested.  This being the middle of the wet season, we could hear the sound of fast running rivers almost all the time. The rivers flow too quickly to be used much for transportation, though they still make bamboo rafts for travel downstream (mostly to entertain and excite visitors). These rustic vessels consist of around 16 ten-metre lengths of thick bamboo lashed together with rattan, and a guy with a bamboo pole to steer you through the rapids (there’s a raft in the photo above). We did a two hour journey on one, and it was definitely entertaining, alternating between tranquillity and terror, and passing the remains of some wrecked rafts along the way. It was a camera-free experience. 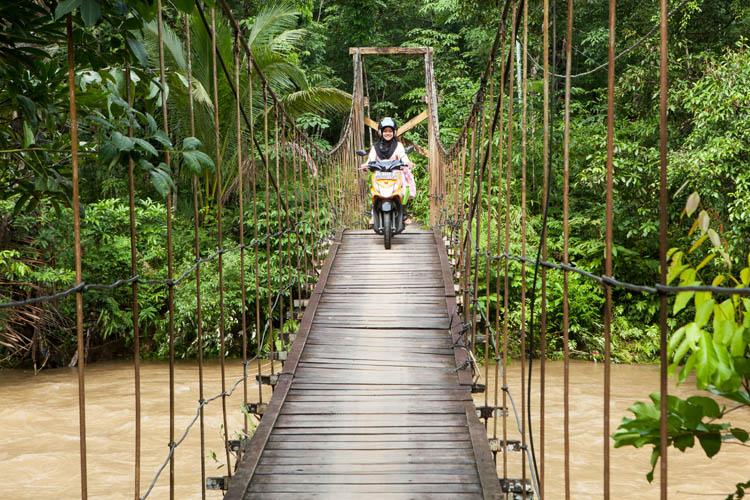 There are a number of small villages scattered around the region, populated by Dayak families, and accessible (only just, in some cases) by motorbike. These are Meratus Dayak, different to the Ngaju Dayak who live here in Central Kalimantan – different language, culture and religious beliefs. 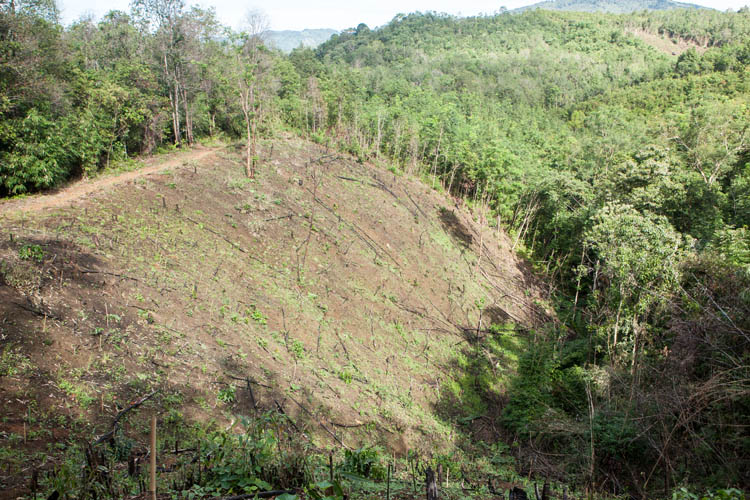 The villages, especially the more remote ones, are poor, and quite dependent on the forest for their livelihoods. They practice the traditional Dayak ladang shifting cultivation as we had previously seen in the village of Tewang Rangkang. During the dry season, an area of forest is roughly cleared and burnt, and then planted with rice, often interspersed with corn. There’s no irrigation, fertiliser or pesticides used. After a couple of years, the location is abandoned (at least for a few years of ‘fallow’), and a new plot is cleared somewhere else. It sounds pretty basic, but apparently they can grow all the rice that they consume – and they eat a lot of rice… 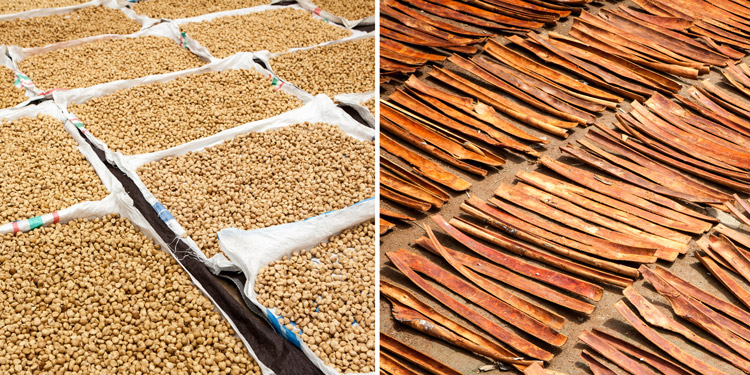 For cash, they collect a range of different produce from the forest. Most important are karet (rubber), kemiri (candlenut, above left) and kayu manis (cinnamon, above right), but they also collect a range of medicinal and culinary herbs, as well as leaf and root vegetables. These get sold in the local market at Loksado. 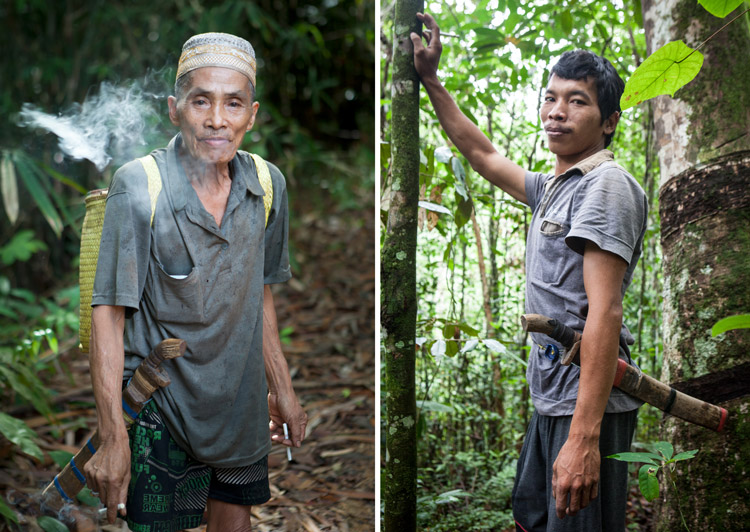 The rubber is only tapped during the dry season, so now it’s peak time for the cinnamon. To collect it from the forest, all you need is a good pair of thongs, a basket of rattan (or plastic) carried like a backpack, and the universal mandau, the machete-like knife worn by just about everyone, sheathed on the hip for quick access. The mandau gets used for everything from chopping trees to opening a durian to cleaning fingernails. For the cinnamon, the whole tree is chopped down when it’s 10 – 20 years old, and the bark is carefully peeled off and chopped into lengths to be later dried and sold. 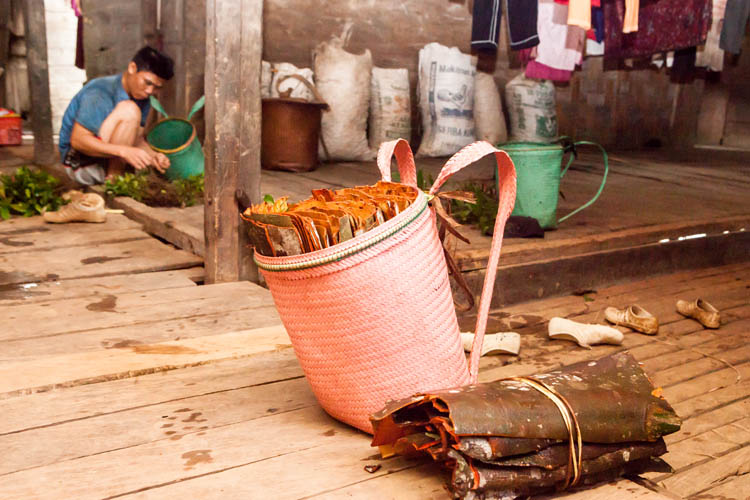 Although to us it looks like a jungle wilderness, the cinnamon trees in the forest are a managed resource. (Apparently there’s no Indonesian direct translation for ‘wilderness’ – it’s all regarded as productive land to them.) As well as bringing cinnamon bark back from the forest, seedlings are also collected. These are sorted and cultivated for a time in the village, and then replanted back in suitable locations in the forest. And then … wait another 10 – 20 years. In the picture above, that’s cinnamon bark in the foreground, and seedlings being sorted behind. And the white bags are all filled with candlenuts. 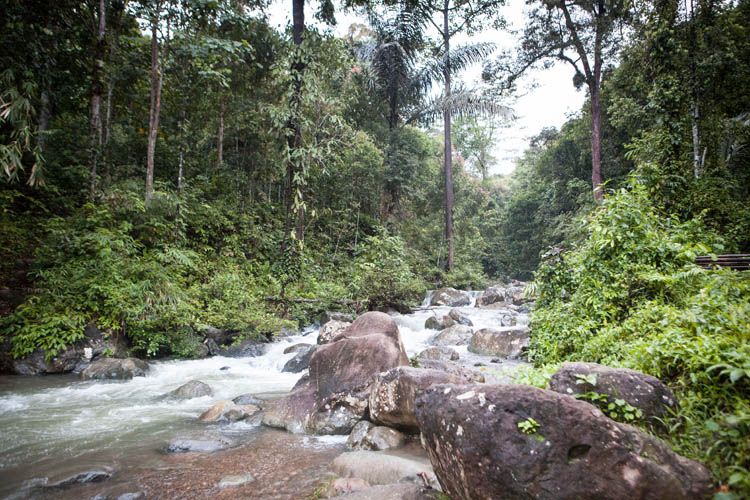 We stayed overnight at homes in two small villages (Haruyan Dayak, and Manakili), each with fewer than 50 inhabitants. Very friendly, very picturesque, and very basic. The villages are beside the river, at a suitable spot to cross over to access forest on the other side. The river is also the very public place where you go to bathe, to wash clothes, and empty your bowels (squatting in the shallows, looking warily upstream for flash floods!) 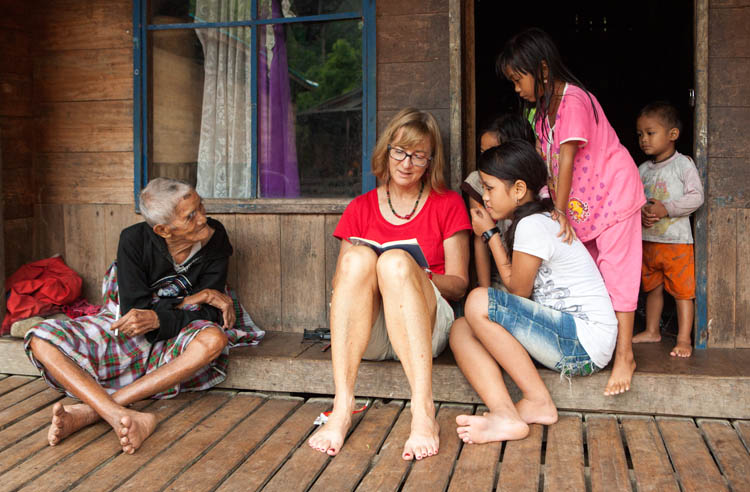 The first night was New Year’s Eve, we had a room to ourselves (in the house above) and a thin mattress, so we went off to bed at the same time as the rest of the family – around 8:30. We had paid for two litres of petrol to fire up the village generator, so that we could re-charge camera, phone and GPS batteries. Unfortunately, that meant that there was also power for the village TV set in the house next door, which allowed them to watch an appalling dangdut/Bollywood/disco/rock New Years Eve spectacular live from Jakarta. The volume was impressive, and we didn’t hear the river that night. (BTW, the very friendly old fellow in the photo above claimed to be 100 years old – though someone else insisted he was 150!) 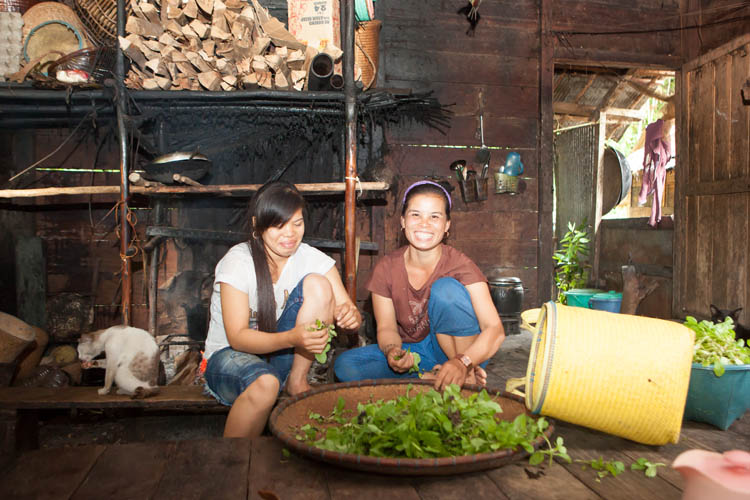 The next night we stayed with a lovely family in this room. No mattress, just a rattan mat. (At this point we started to wonder at the moderately high price of our ’tour’). The family has lots of cats, kittens, and small dogs, which were periodically rounded up and thrown out the door, through the window, and dropped through a hole in the floor. They’d look briefly offended, and then immediately return inside. 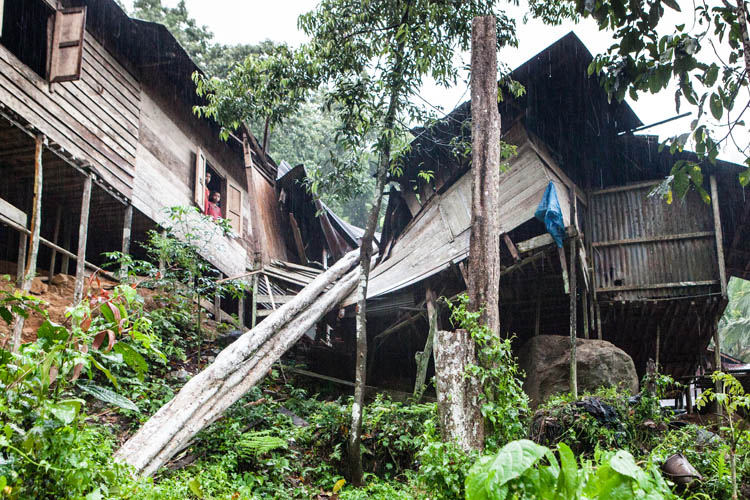 There was some spectacularly heavy rain at times, and also some wind, so it was no surprise when we heard the sound of a large tree crashing onto the house next door. It was about 5pm, just when everyone is gathered to get the evening meal together, and the tree fell right onto the kitchen. By very good fortune, it was the only unoccupied house in the village, the owners having moved a couple of months earlier. 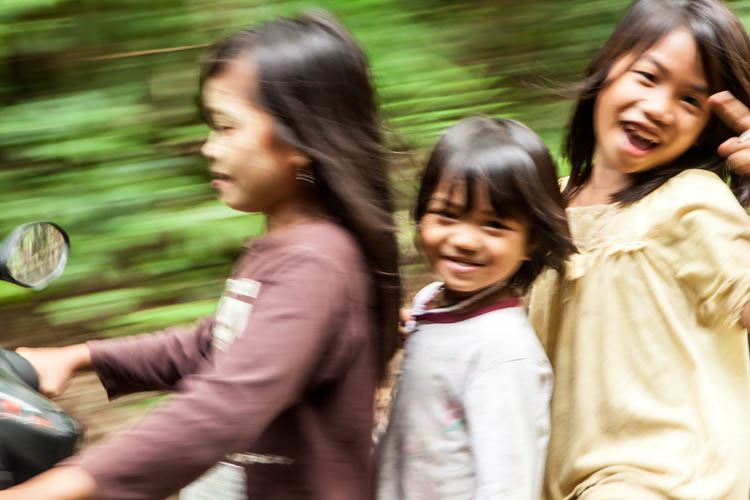 We met these girls when we walked through Malaris village, almost back to the ‘metropolis’ of Loksado (well, it has a road that cars can use). The girl on the front of the bike is wearing a rice paste mixture all over her face, used to try to stop the skin darkening (it looks awful). She is 10 years old, and her passengers are four and eight, all totally comfortable. Kids here are born on the back of motorbikes… 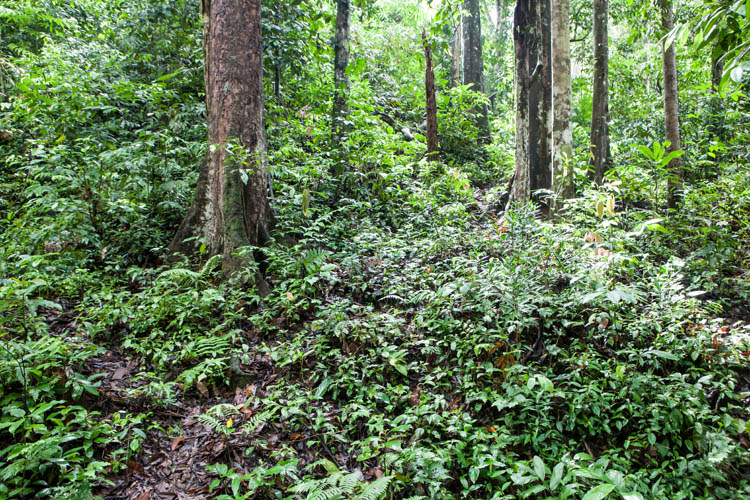 One Response to Meratus Mountain trekking