Posted on September 5, 2012 by John Boyd Macdonald| Leave a comment 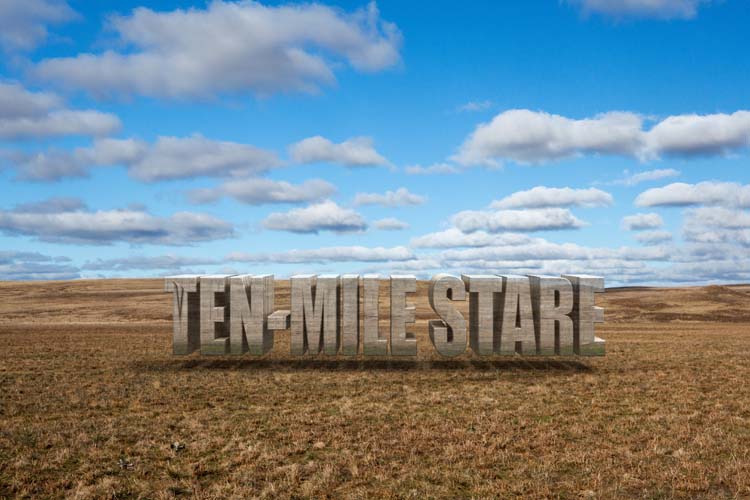 This image has much in common with the previous Willy Gray picture. The base image was taken at the same time and location  (mid-winter 2012 near Dalgety in the Monaro region of NSW). It’s a little more colour-saturated, and although untouched in post-processing, the sky has a slightly unreal feeling to it – almost reminiscent of the opening credits of The Simpsons animation!. Although not photo-stitched to create a panoramic aspect ratio like Willy Gray, it frames a similar composition of cloud-spotted blue sky over a grassy plain (I refrain from calling it a ‘paddock’ or ‘pasture’ so as not to define it by its current function).

The ‘Ten-Mile Stare’ text is also derived from the same David Campbell poem (The Monaro). The full line reads:

Like the other Willy Gray image, the intention is to call up the romantic European-Australian squatter/grazier vision of the landscape, projected in three dimensions as a text object on the landscape to which it relates and adheres. The text fragment is however less prescriptive, even somewhat oblique, forcing (or enabling) the viewer to extract their own meaning or interpretation of the image. Alternative interpretations are both possible – and desirable.

This entry was posted in Human landscapes, Text in photography and tagged David Campbell, Monaro, Willy Gray. Bookmark the permalink.