The Dayak Tiwah ceremony that we attended back in last November was one of the most astonishing and powerful things that we have experienced in Kalimantan. So when we heard that another, much larger Tiwah Massal was to be held in the nearby Katingan River village of Tewang Rangas, we were determined to get there. Fortunately our dear and very knowledgeable Dayak friend Lelie was able to accompany us, and we were able to stay at the family home of Pak Damelson, who is one of Karen’s workmates at the Museum Balanga in Palangkaraya.

The Tiwah is a secondary funeral, sometimes held many years after death, which aims to help the soul of the deceased on its journey through the afterlife to ‘the Prosperous Village’ i.e. Heaven. ‘Good’ spirits, and the spirits of the ancestors, are invited down to the village to help in this task, and also to help protect the village from other, malign spirits that might be around. 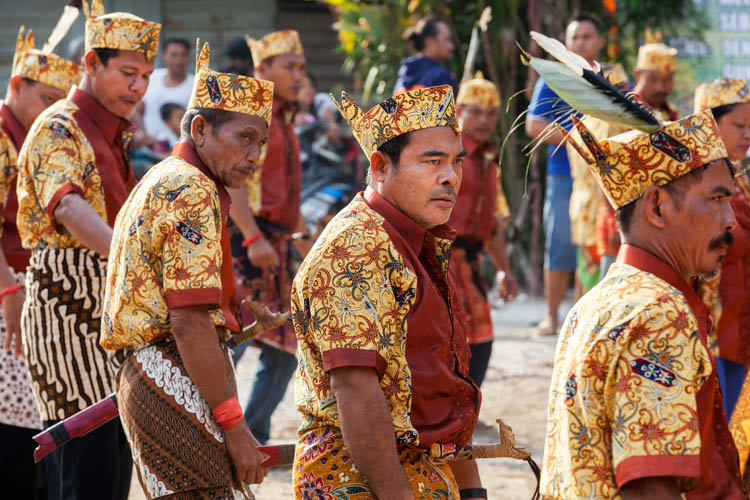 The Tiwah ceremony is a big, complex and expensive affair, and it is increasingly common for a mass Tiwah to be held for a number of the recently (or not-so-recently) deceased. The Tiwah at Tewang Rangas village was large indeed, and was for some 57 people who had died between the years of 1945 and 2013. The government of the local district (the Kabupaten of Katingan) helped to fund the event, which involved ceremonies over a period of about six weeks. We attended for the main days, when the big ceremonies are held, a large number of animal sacrifices are made, and the remains of the deceased are reinterred in specially built wooden crypts (known as sandung, or pambak). 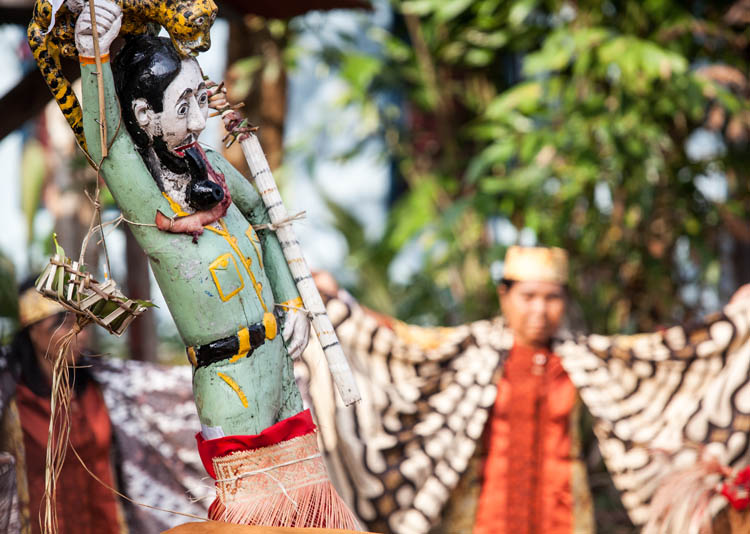 In the central square of the village, a number of kayu ulin (Ironwood) posts are erected, each with a carved and painted representation of one of the departed. A large circle of people move in a slow anti-clockwise dance around these sapundu, raising their arms and inviting the spirits, with every sideways step, to descend. 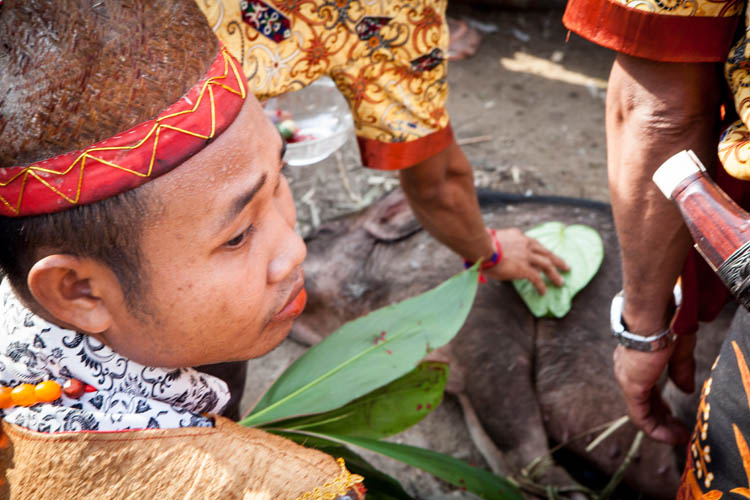 In the Dayak Ngaju Kaharingan religion, there are no priests as such, but the ceremonial proceedings are led and presided over by one of more basir – specialists in the complex and precise details of correct ritual procedure. The basir must have the gift of being able to communicate directly with the spirit world, and be adept in the ancient Sangiang language, which is the language of the Kaharingan spirit world, and is used for recitation of lengthy prayers.

At Tewang Rangas there were no less than seven basir (known locally along the Katingan River as ‘pisur’’). Chief amongst these was Babak (above), who comes from the nearby village of Tewang Rangkang, and was in fact the basir at the Tiwah we attended there. He was very busy throughout the Tiwah. 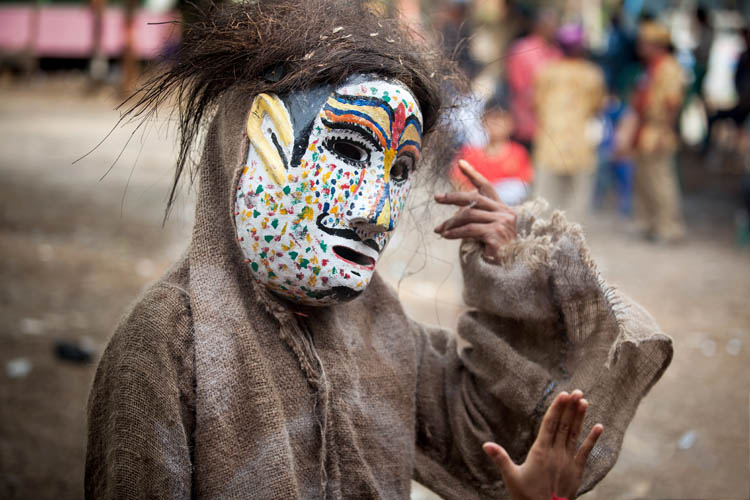 Three bukung characters were also busy throughout the days we were there. The role of these masked and costumed figures is to protect the village and participants in the ceremonies from any ‘malevolent’ spirits who might try to attend. They wander around more or less continuously clacking together poles of split bamboo, to scare them off. They also manage to terrorise small children around the village. Apparently the identity of the individuals inside the bukung costumes is a secret, and they are not even allowed to return home to sleep at night in case their human identities are revealed. 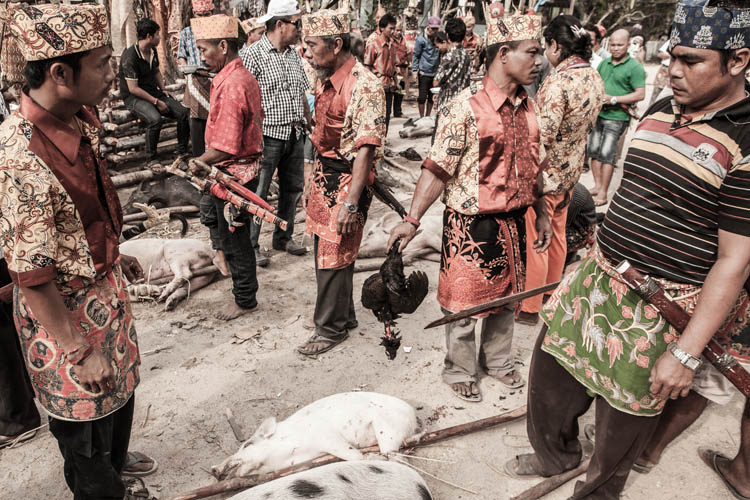 Over the two main days of the Tiwah, a large number of buffalo, cattle, pigs and chickens were sacrificed. The pigs (on the second morning alone there were some 17 slaughtered) are despatched to the afterlife very quickly and relatively humanely, with a single carefully aimed blow of the mandau (the short sword/bush knife universally worn by Dayak men) to the heart. In just a few seconds, it is over. 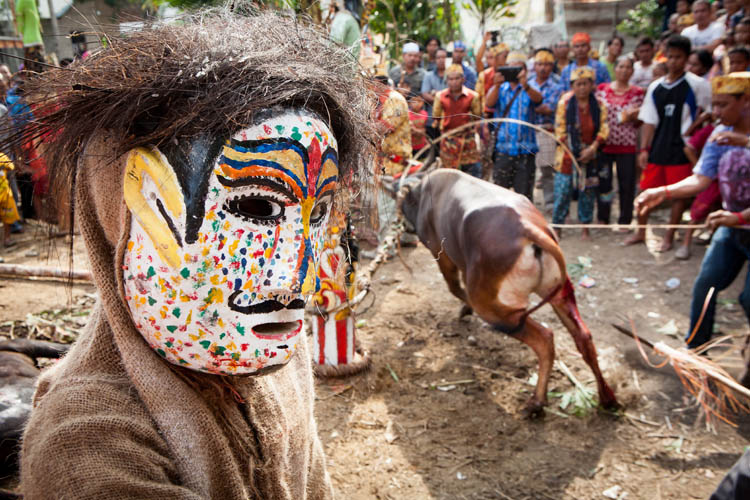 For the buffalo and cattle, the process is neither quick nor painless. Each beast is tethered to one of the sapundu, via a very strong rope and yoke of rattan cane. Selected family members have the ‘honour’ of taking turns to spear the animal (always on its right side). When the poor creature can no longer stand, it is then quickly finished off with a large knife. This last step is performed by a Muslim villager in proper halal manner, so that the meat can subsequently be shared with the Muslim members of the community. Ever practical and communal. 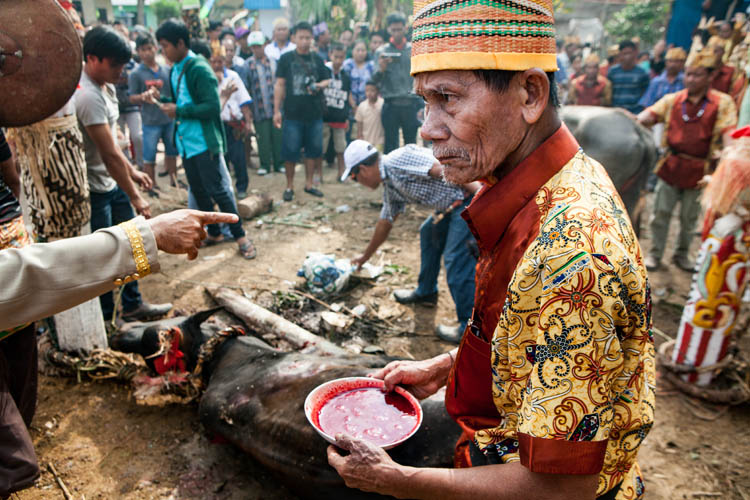 For the Kaharingan participants, the blood of sacrificed animals is considered to be pure and cleansing. It is collected and used in other offerings and in subsequent rituals. A drop is placed on the chest, neck, chin and forehead of participants. Mothers dip their infants’ feet in blood to give them strength and good fortune for years to come. 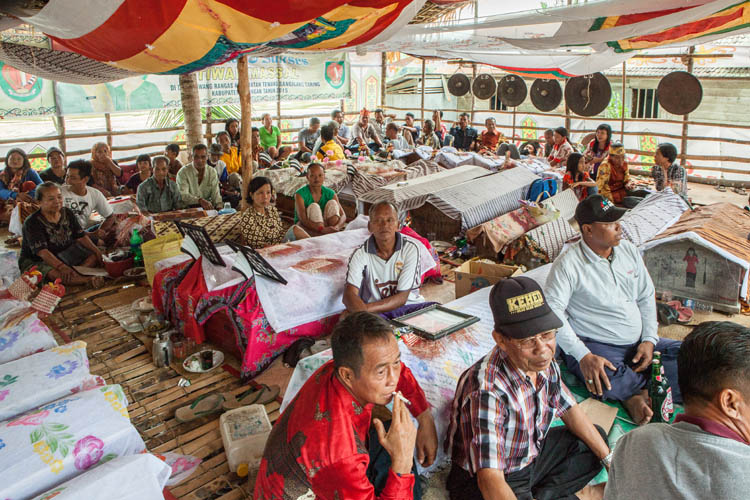 On the day before we arrived, the bones of the deceased had been removed from the graves where they had laid since burial. These were cleaned, wrapped in fine cloth and placed into coffins. These were all laid out in state on a large covered platform, where they stayed for two days until all the dances, prayers, sacrifices and offerings had been completed. One or more family members maintained a vigil beside each of them, day and night. 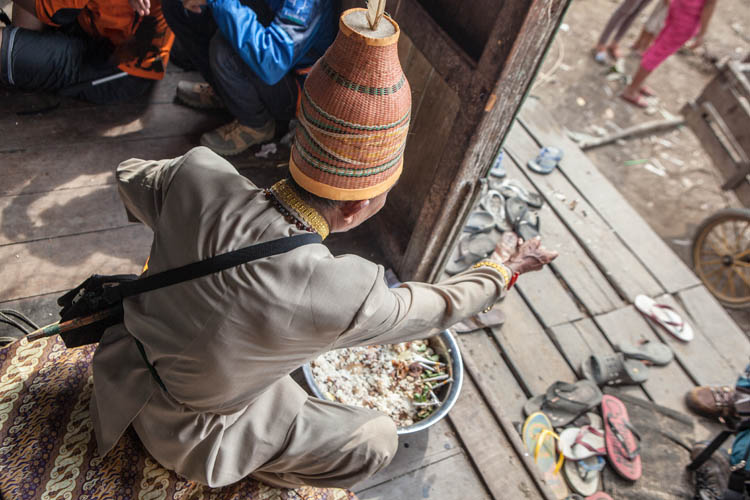 For one important ritual, one of the pisur sits in the doorway of the main ceremonial building, and begins a long prayer in the Sangiang language. At regular intervals he throws rice from a bowl placed in front of him. This invites and encourages the good spirits to come to the Tiwah. He seems oblivious to all around him, and you have to be careful to avoid getting showered with rice as you enter or exit the building. 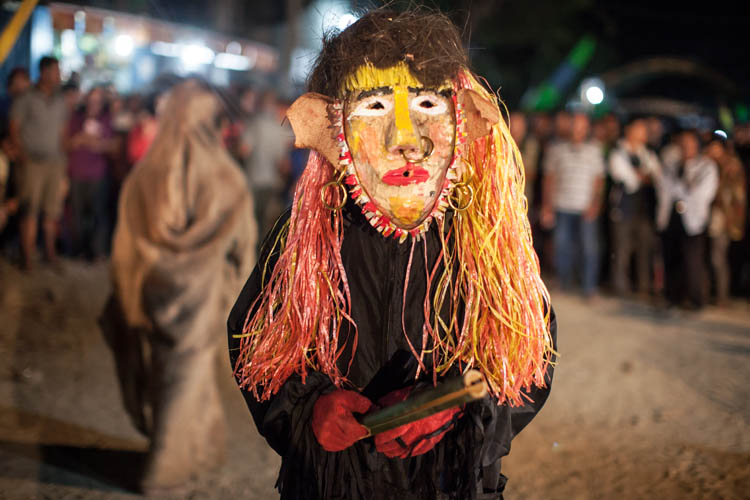 As darkness comes, the bukung look even more otherworldly. Rice wine (baram) and beer having been freely consumed for some hours, the action on the street can get a bit ‘messy’. Nothing aggressive, in fact everyone was very good-humoured indeed – just a number of intoxicated people… 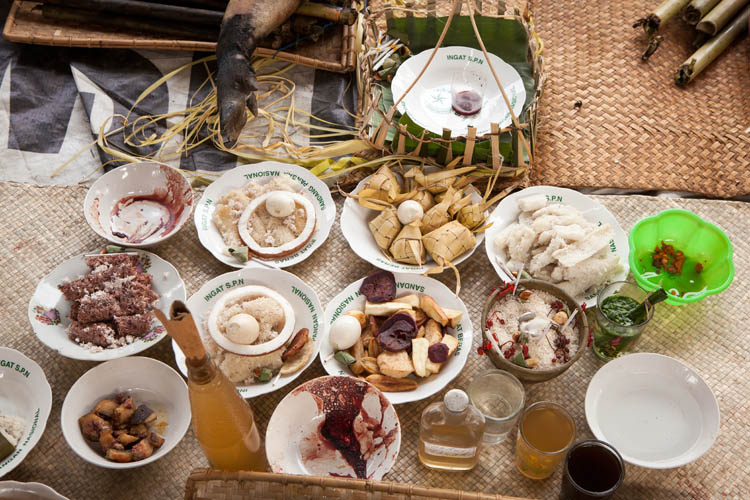 Next day, after all the preparations and sacrifices have been completed, rattan mats are spread in a large shaded pavilion, and a huge array of offerings and ceremonial objects are laid out. Babak and another basir conduct the prayers, and each of the offerings is bathed in smoke, touched by the mandau of the basir, and raised up into the air three times. 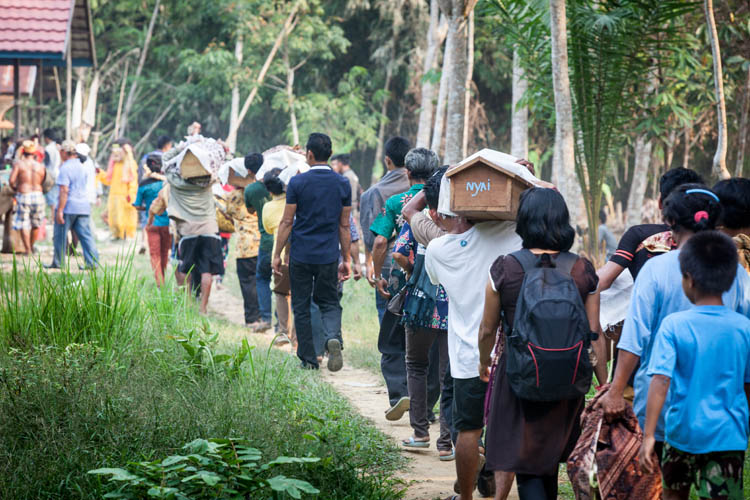 After the completion of the prayers, there is a long procession of family members carrying the coffins about 500 metres to the location of the newly constructed sandung crypts. 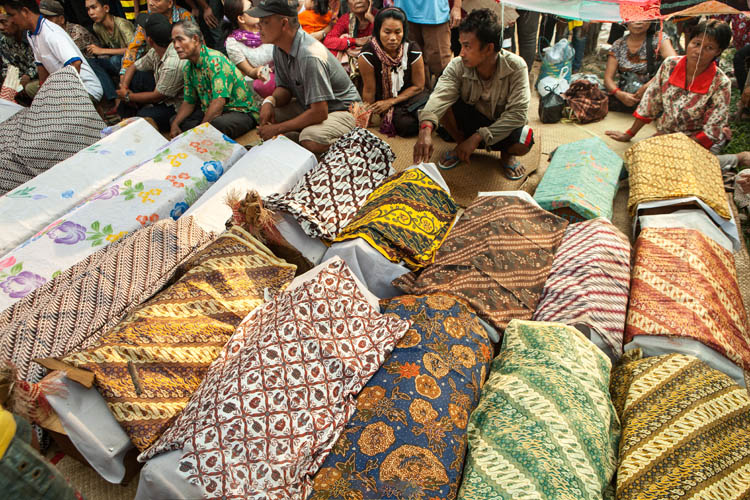 Each of the coffins is lined up outside the appropriate sandung, each covered with a batik cloth. Only the bones of blood relatives can be placed in the family sandung, as it is considered possible that anyone else (including spouses) could later turn out to have actually been evil spirits which had taken human form. 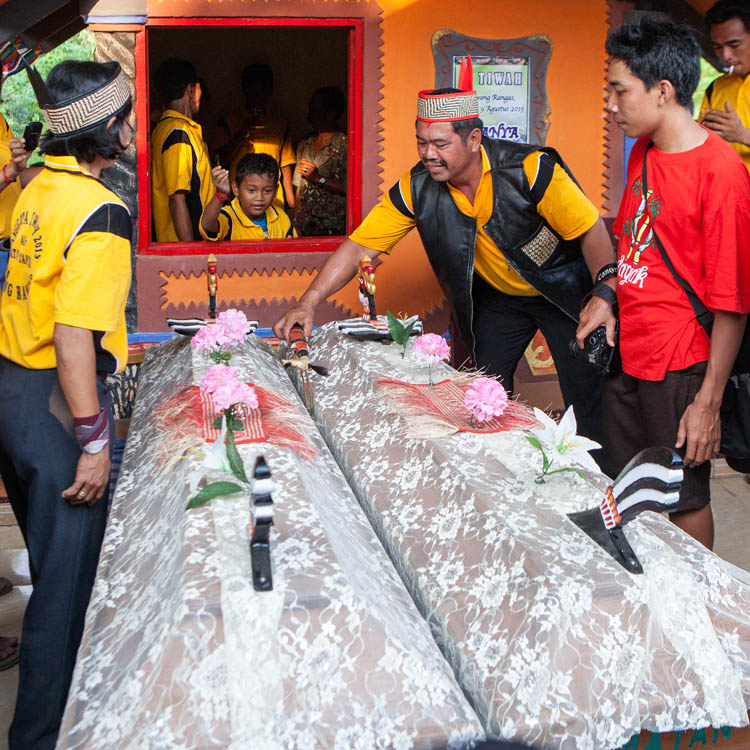 A gong orchestra is playing, there is much more baram  and beer consumed, and there are a range of strong emotions amongst the substantial crowd. There are people looking contemplative, there is hilarity, there is mourning, yahooing and singing. Family photographs are being taken everywhere – as well as photos with the four bules (foreign visitors) who were in the village.

And one by one, each of the coffins is passed through a little doorway into the sandung, and placed in its final resting place, ending a journey which for some of the deceased had taken 70 years since they passed away. 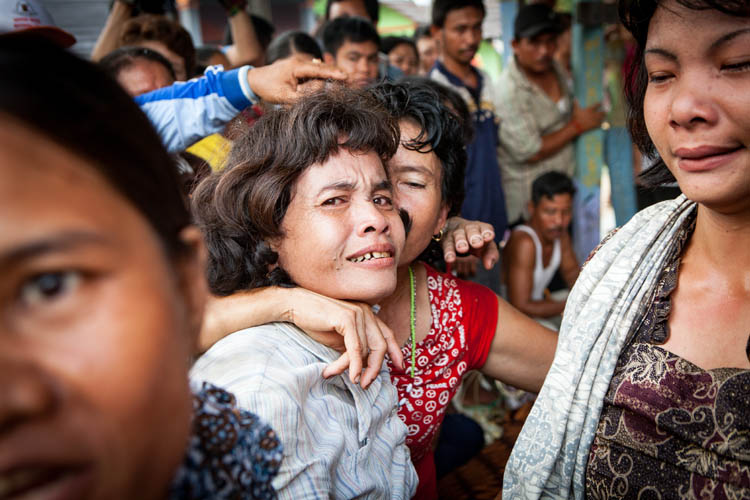 The woman above appeared to be hysterical, and I was told that the spirit of one of the deceased had entered and taken possession of her. After flailing around for a bit, she grabbed both of my hands while I said some inane soothing things to her. She did actually calm down, and proceeded to thank me profusely, before collapsing exhausted. The (blurry) woman on the left of the photo was concerned that the spirit might have transferred to me. 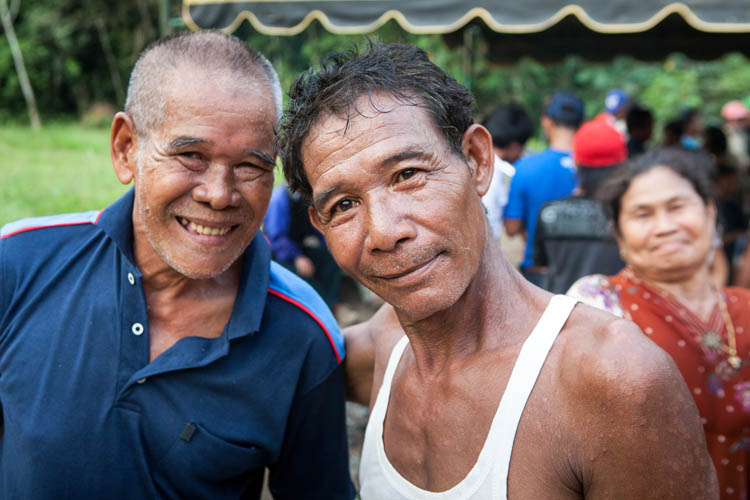 The friendliness and hospitality of the people of Tewang Rangas was amazing. We were welcomed and encouraged to witness – or participate in – all of the important parts of the ceremonies. We were invited into people’s homes and given several meals (which, not surprisingly, featured lots of buffalo meat, beef and pork!) They were as curious about us as we about them, and we literally lost count of the number of times we posed for photographs. 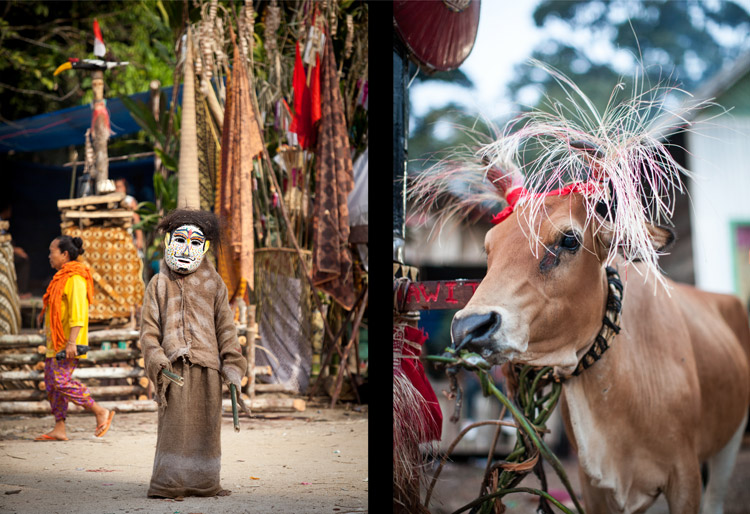