Last year I wrote (here and here)  about the wonderful Dayak cultural festival that’s held every year (mid-May) in Palangka Raya – the capital of this Indonesian province of Central Kalimantan. The festival is known as Isen Mulang – which translates from the Dayak Ngaju language as ‘Never retreat’, or ‘Never surrender’. (Isen Mulang is also the motto of the province). 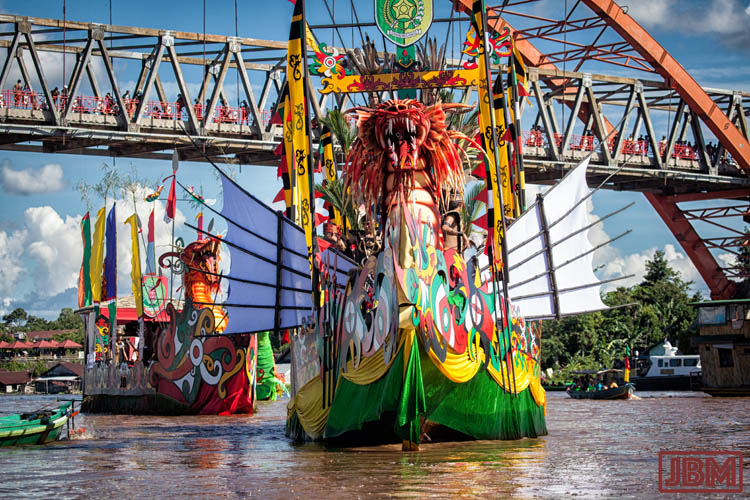 There are dozens of events held over the days of Isen Mulang – from dance and music competitions to traditional cooking, woodchopping, fishing (by hand!), blowpipe target shooting, and a massive Mardi Gras-style parade through central Palangka.

This year we were again amazed at the near-total absence of foreign tourists. Apart from around 10 expats (including us), there were literally 10 other foreigners that we could see – almost all part of a tour group led by David Metcalf. Meanwhile almost 4 million tourists visit Bali each year Yes, Bali is lovely! But the difference in visitation numbers is unfathomable.

One of the highlights again this year was the procession of brightly decorated ‘dragon boats’ (actually known as Jukung Hias, meaning ‘decorated boats’) along the Kahayan River, through the centre of the city.

As with almost all of the events held during the week-long festivities of Isen Mulang, it’s actually a competition between the 14 districts (13 kabupaten and one kota) which make up the Province, with one vessel representing each district. 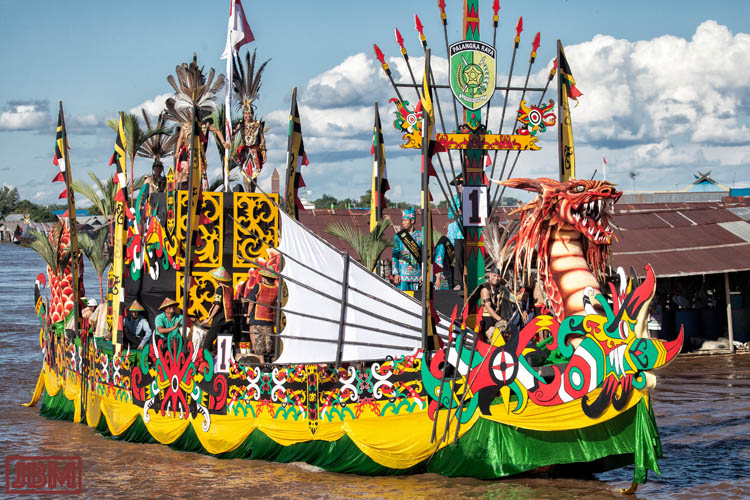 Points are awarded to each competing jukung according to the quality of its decoration, the performance of the traditionally attired warriors, dancers and musicians aboard each one. 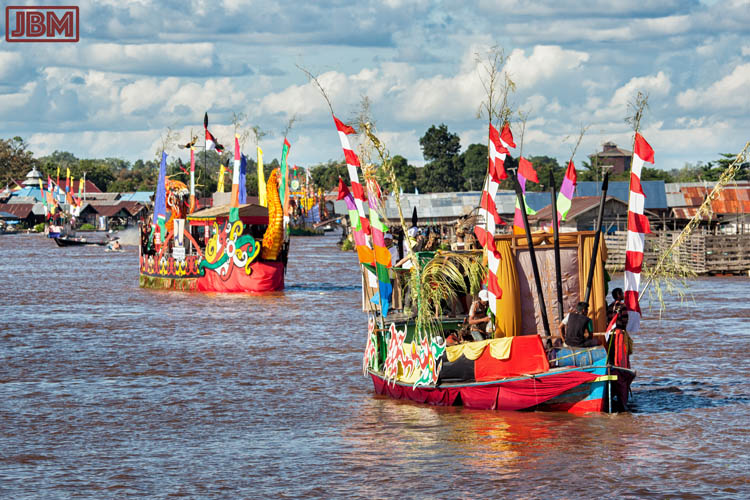 The sight of all the brightly bedecked boats lined up down the river really was spectacular. 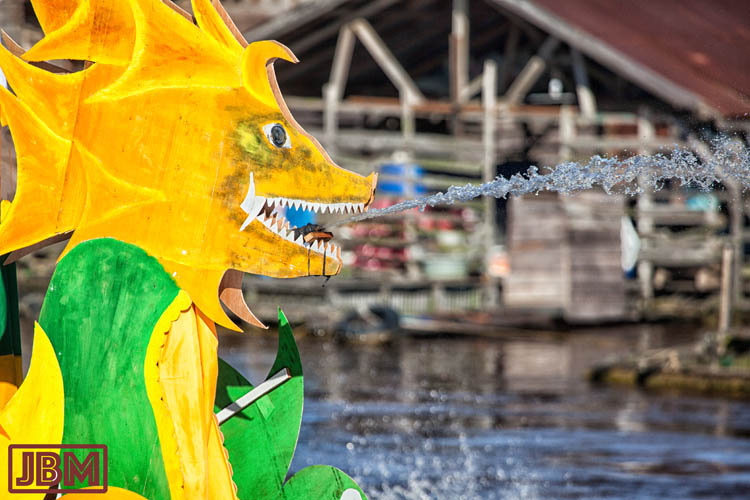 Points are also won for any special effects they might employ – such as fireworks or water spouts from the dragons’ mouths. 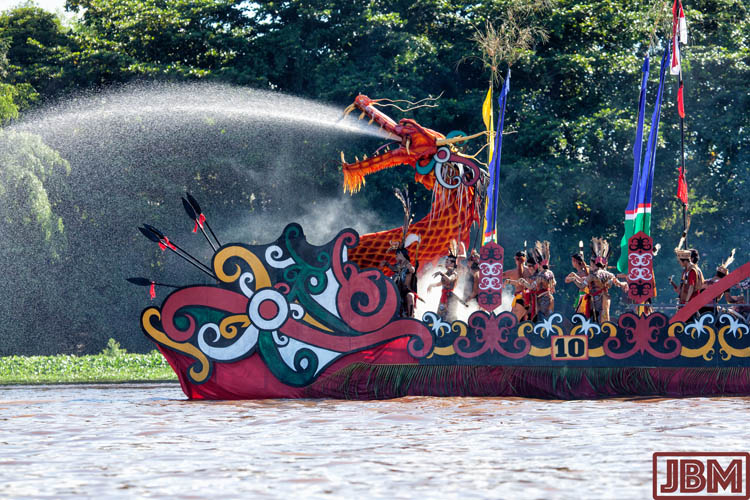 Competition is fierce, and the results are spectacular. 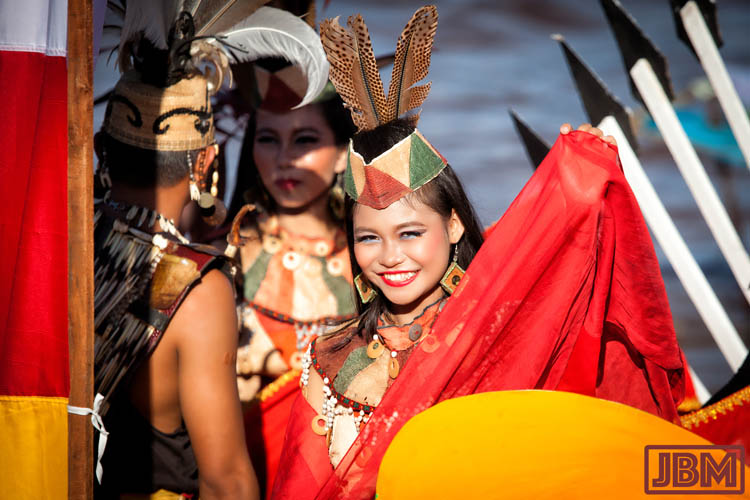 The performers seemed to enjoy themselves as much as the spectators. And they looked wonderful, all decked out in traditional Dayak costumes, with clothing made from bark (kulit pohon nyamu) and batik, headdresses made out of the beaks, casques and feathers of a hornbills and tail-feathers of the Great Argus (Argusianus argus). 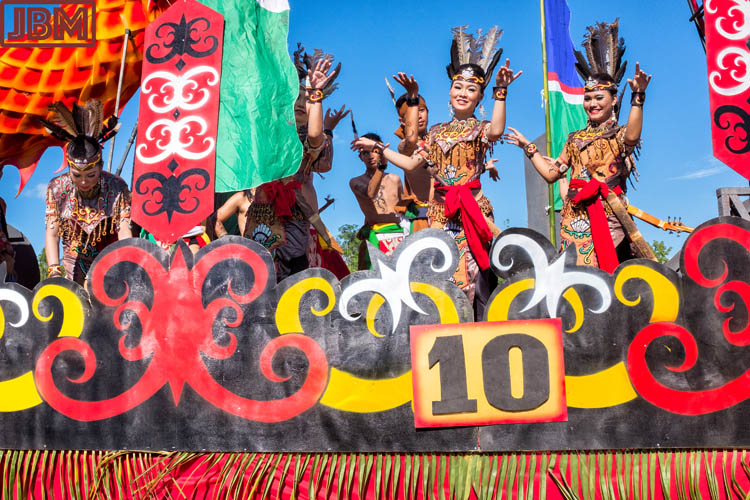 Some of the performers appeared to be heavily tattooed wth traditional Dayak motifs, but the tattoos are (in almost every case) temporarily applied for the event, because few of the local Dayak people have extensive tattoo decorations as in the past. (In some other regions e.g. amongst the Dayak Iban of West Kalimantan, tattooing is more common). 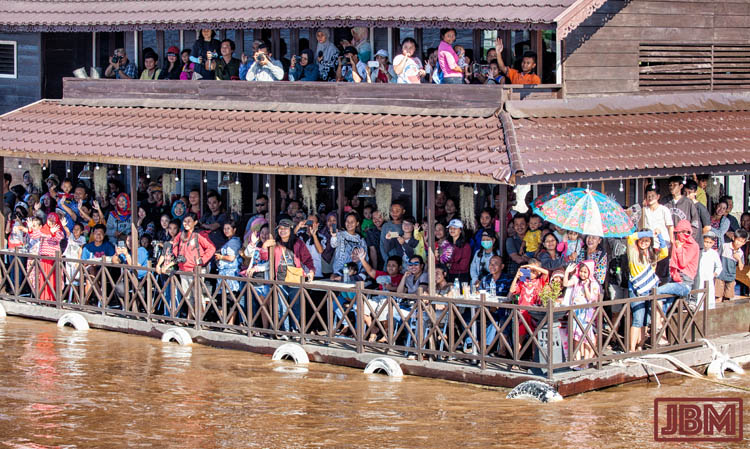 We were fortunate to be out on the water as the flotilla arrived – on board one of the very comfortable vessels of Wow Borneo (as well as buzzing around amongst the jukung on a little kelotok longboat).

But along the banks of the river, a large  (by Palangka Raya standards) crowd was assembled to watch proceedings. 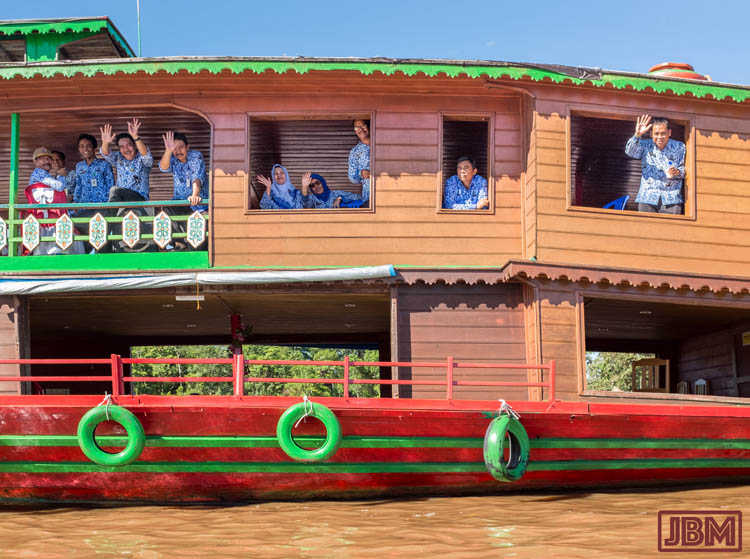 There were a number of other spectator vessels out on the river. The passengers on this one were all civil servants, wearing the special blue KORPRI (Korps Pegawai Republik Indonesia) batik uniform that may only be worn on the 17th of each month, and on special occasions such as this. 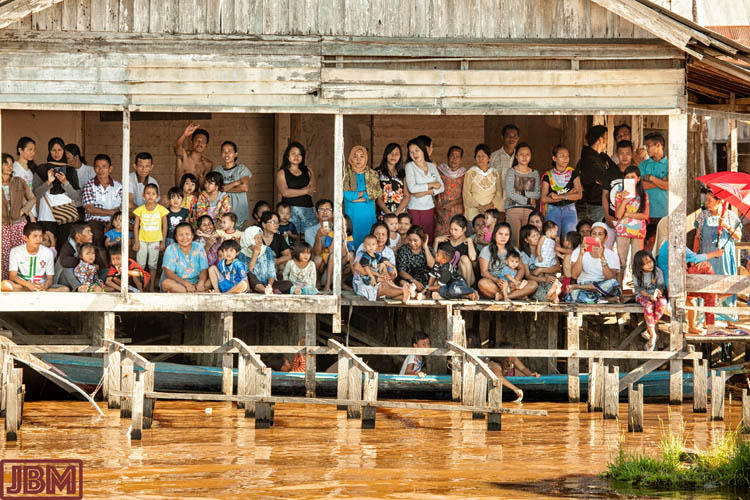 All of the best vantage points were chock-a-block full of spectators. As is often the case in Kalimantan, the spectators were as interesting as the spectacle. 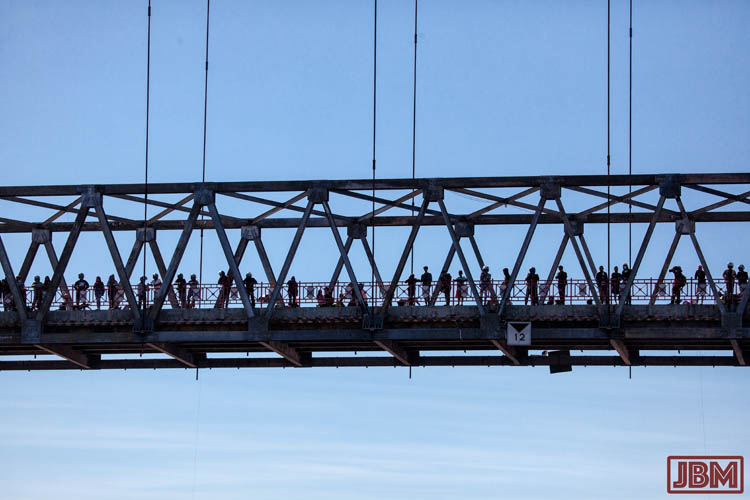 Some opted for an aerial view of the show from the Kahayan River bridge. 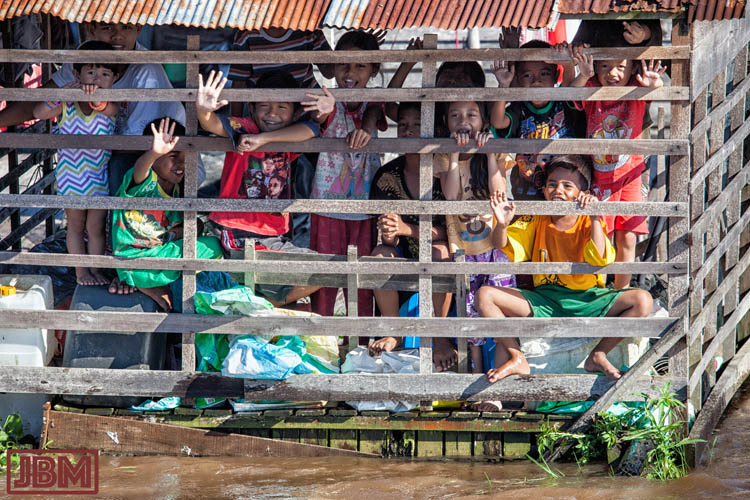 Children found some creative ways to get a good view. 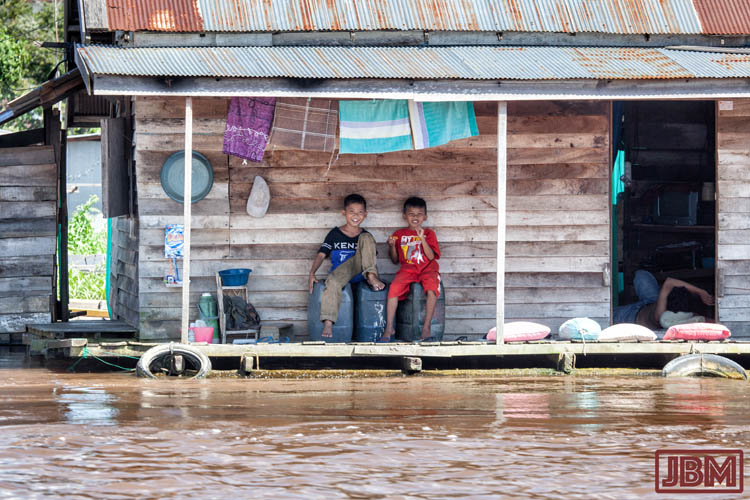 Others took a more relaxed approach to viewing proceedings. 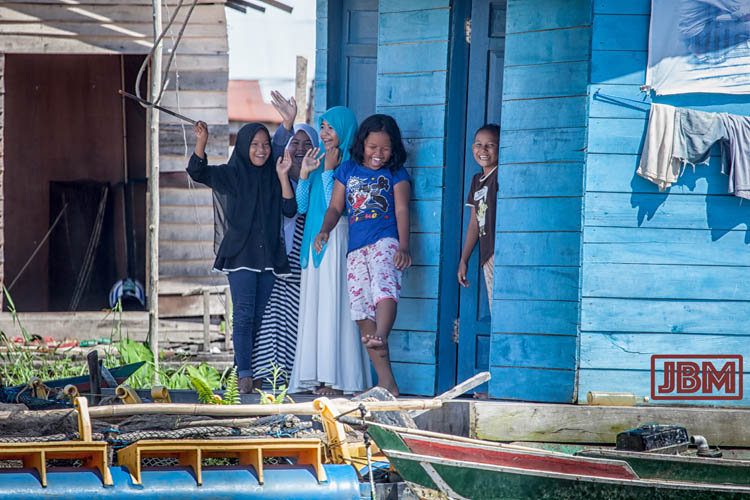 Some were quite excited – particularly when they caught the attention of bule (white skinned foreigners). 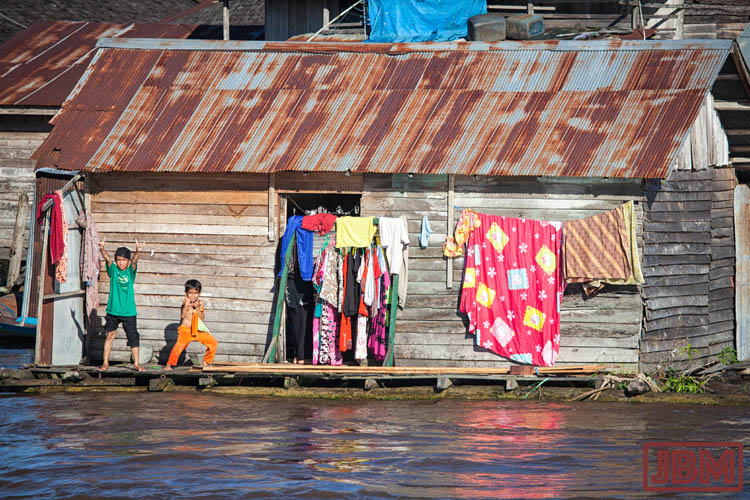 While still others were out in the ‘back yard’ of their floating homes, practising their heavy metal hand gestures. 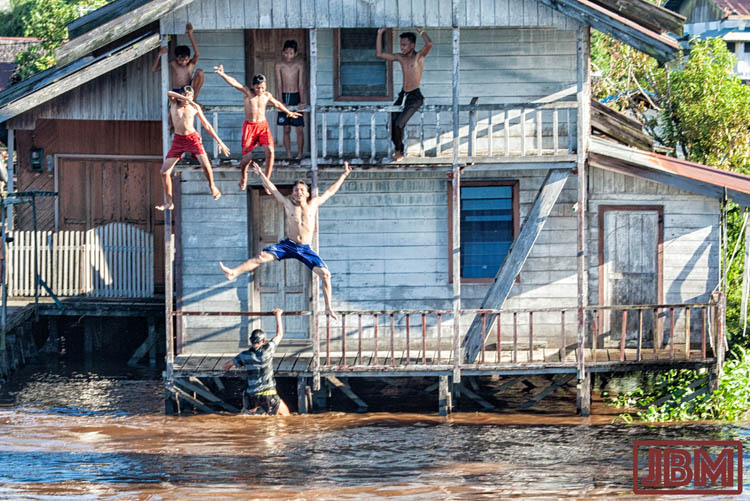 And others just got on with the serious business of skylarking. 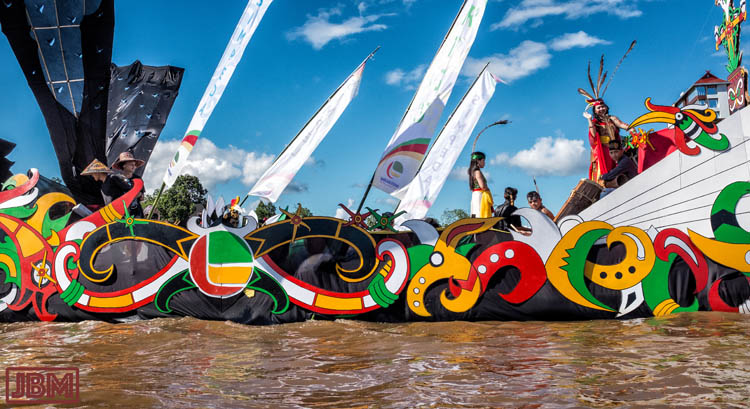 The Isen Mulang Festival was once again a great experience, and if we get the opportunity we will certainly be back again next year! 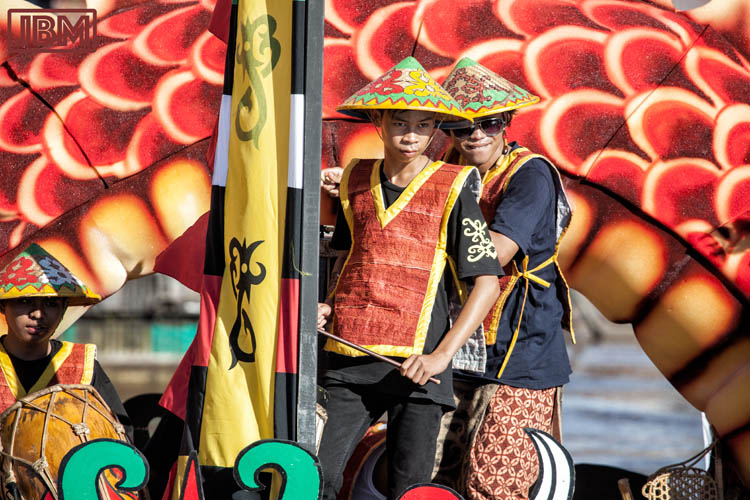