Posted on July 9, 2015 by John Boyd Macdonald| Leave a comment

Here’s a followup to the previous post about the Mahakam River in East Kalimantan, but this time focussing on just one part – the wonderful Mahakam Lakes. 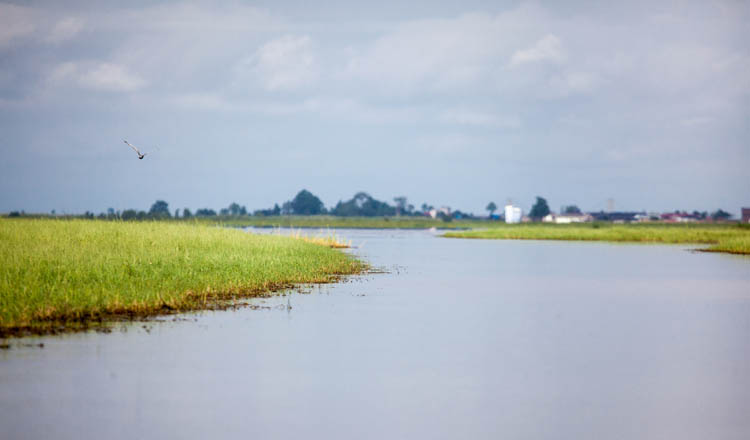 The Mahakam Lakes region is a complex of wetlands including some 32 lakes, three of which (Jempang, Semayang and Melintang) are large – each more than 100 sq km in size. All up the wetlands cover over 8,000 sq km, but much of this only gets inundated during the wet season. There are nine major villages and a population of around 15,000 people – Kutai, Dayak Benuaq, Banjar (who have moved up from Nagara in South Kalimantan), and other communities. The landscape looks and feels a lot like the Lake Sentarum region in West Kalimantan, (which we visited in April). 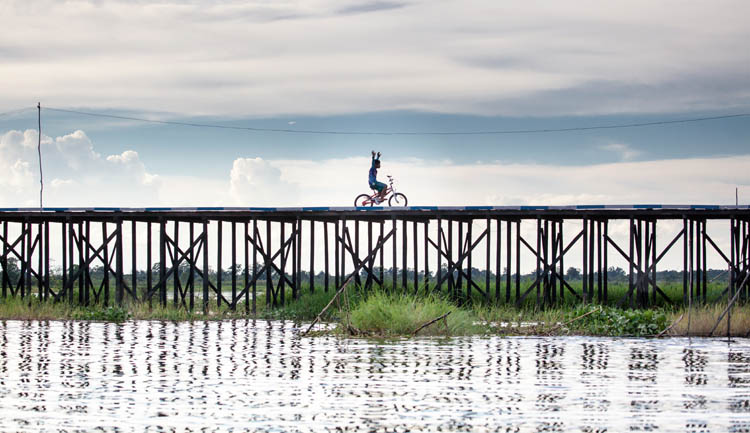 We were there late in the wet season, when the water levels are still high, so most of the villages can only be accessed by longboat. On the smooth waters with a small outboard motor whirring away behind you, it’s an extremely pleasant way to travel, and there are always interesting sights along the way. 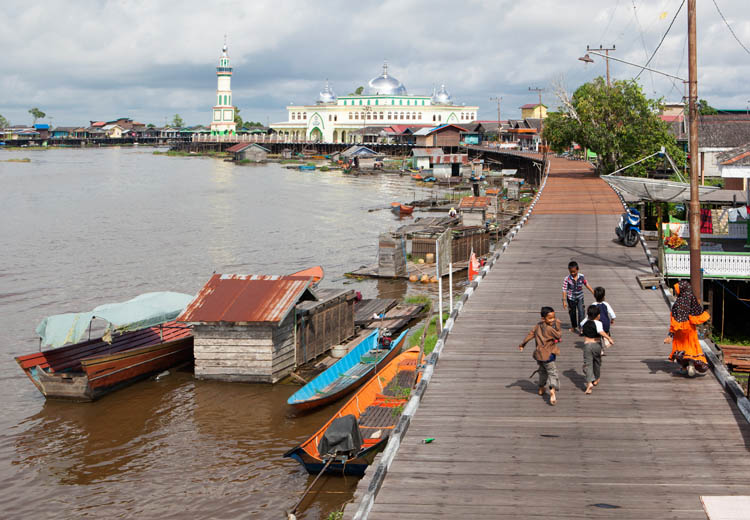 In most of the villages, like Jantur pictured above, the houses and roads are built entirely on wooden platforms standing on wooden stilts. 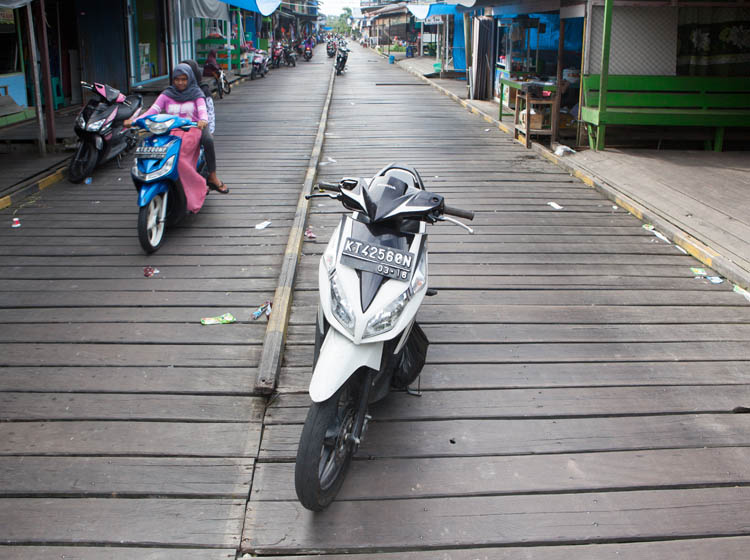 In Muara Muntai (above), the arrival of a motorbike is preceded by a clattering sound as the tyres rattle the boards underneath. 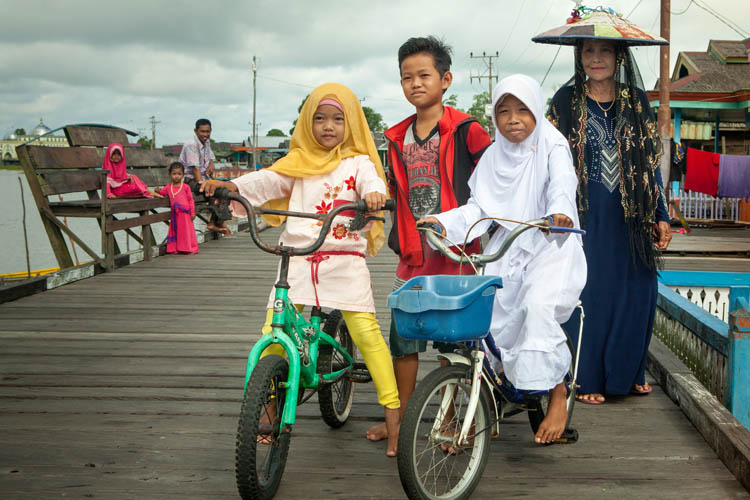 Life ‘on the boards’ goes on as it would on any Indonesian streets. People promenade, carry loads to and fro, sit and watch the world go by, and kids ride their bikes and fly their kites. We thought we had time to walk the length of Jantur village, but it is longer than we at first realised, and we made very slow progress as we had to stop, exchange pleasantries and explain ourselves to everyone that we encountered along the way. 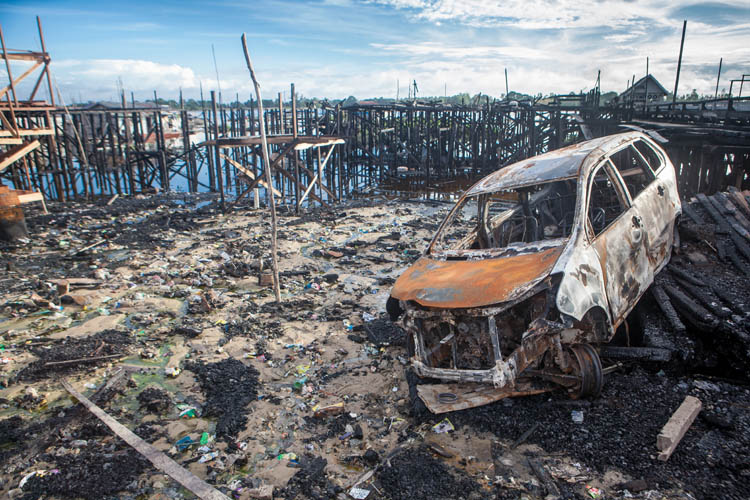 One problem with living amongst all that lovely timber is that fires are common, and often devastating in impact. (We have seen this before at Flamboyan in our ‘home town’ of Palangkaraya). The fire in the village of Tanjung Isuy (above) happened a month before our arrival, and destroyed many of the buildings and jetties fronting the lake. They somehow managed to contain it before the whole village was burnt. 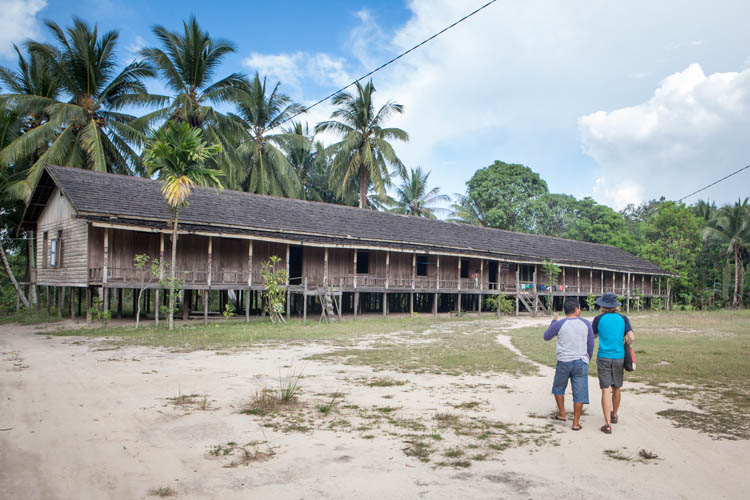 Nowadays, living in longhouses (rumah panjang, betang in Central Kalimantan or lamin in East Kalimantan) is uncommon – though we saw many longhouses, including new ones, in West Kalimantan. This one above is fairly new, so it is built more for convenience than for protection. The older style of rumah betang are elevated four or five metres up, with retractable access steps, so that the occupants are safe from predatory animals and raids from enemy tribes.
Inside there is (as always) a long open communal area, and doorways into the private quarters of each of the families. This one is about a ’12 door’ longhouse – meaning that 12 families share the building. 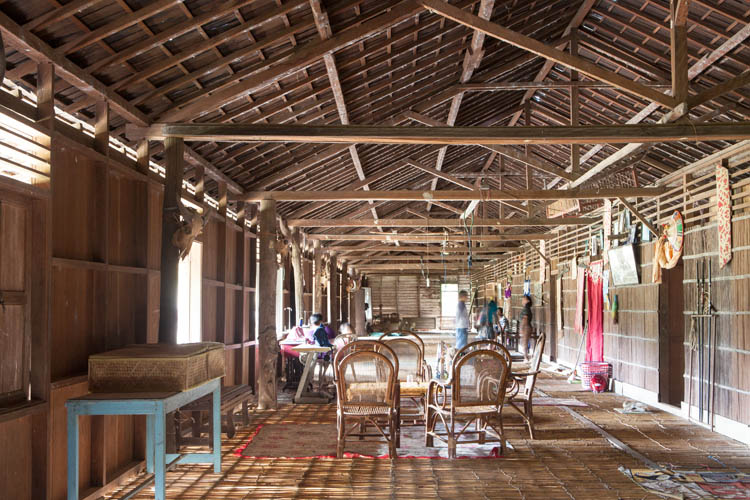 The floor on the inside of this longhouse consists of strips of split bamboo. Like all Indonesian houses, you leave your shoes or sandals outside, and it was quite painful to walk around inside with our tender western feet. Thankfully there are mats here and there… 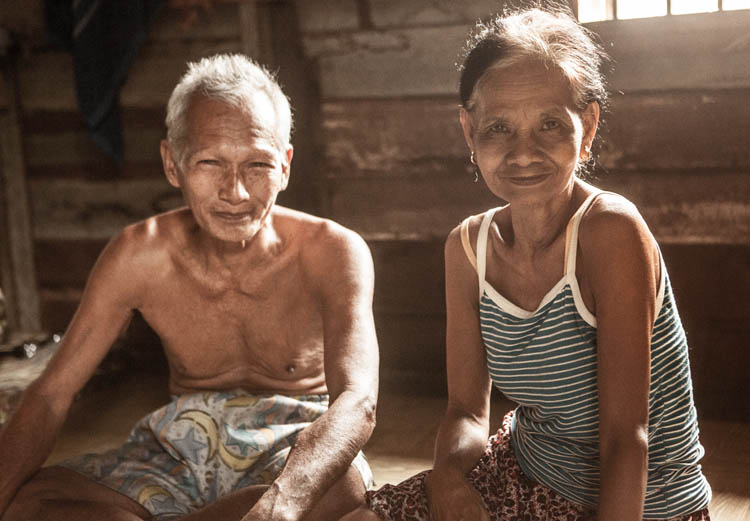 Pak Jayo and his wife Bu Panis live in dusun Panaat Bura, on the outskirts of Tanjung Isuy. Their home is surrounded by dozens (maybe hundreds) of wooden figures that he has carved. There are gardens containing (amongst many other herbs, fruit and vegetables) the Doyo plant, whose fibrous leaves are used to make the ulap doyo cloth which is unique to the Dayak Benuaq people of this area. 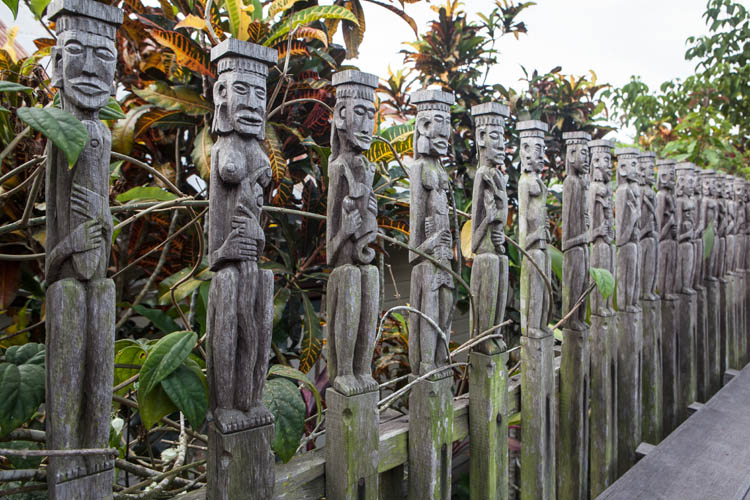 They warmly welcomed us and showed us around the house and garden. They make a range of handcraft goods for sale to visitors, though their Visitors Book showed the most recent guests were more than a month previously. I bought a bikini ha necklace strung with boar’s teeth and a kind of wood that will make me invisible to my enemies. You never know when that might come in handy. 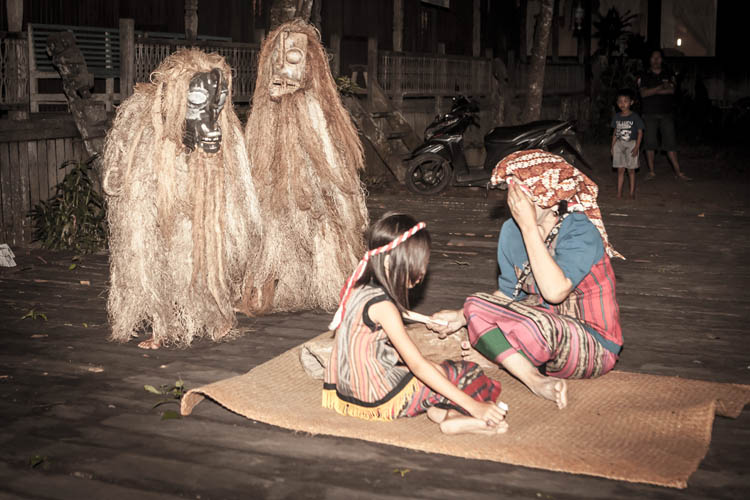 In Tanjung Isuy we arranged (i.e. paid for) a traditional dance performance one night. It was a mostly disappointing and perfunctory performance, because many of the dancers had been called to a special service at the local church, and those who did show up were perhaps not the most skilled of dancers. One dance was however very interesting. It told the story of a young girl who became very ill after being visited by malign spirits (above). Her mother despaired and moaned, and a ritual healer (a balian or perhaps a basir) was summoned to exorcise the spirits that had put the bad spell on her. Happily, his chanting and dancing worked like a charm (which in fact it was), and there was a short and joyous finale. 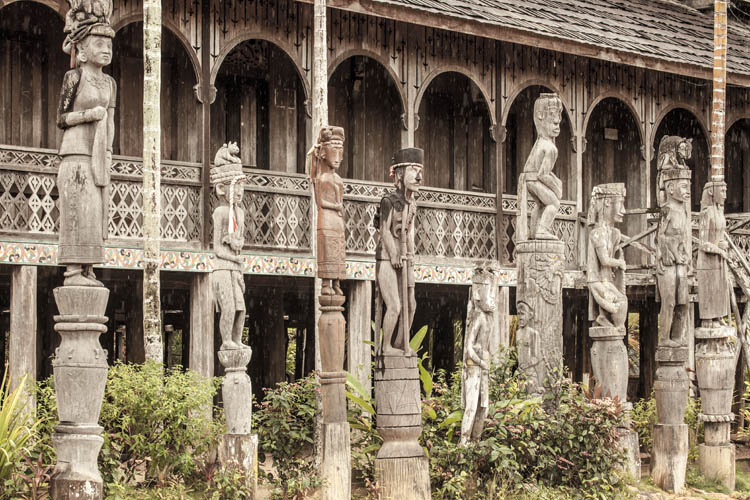 The new (2013) longhouse at Mancong village is an impressive two-storey affair, and it functions as a cultural centre rather than as a residential building. It sports a large number of carved wooden patung belongtang out front. These are normally built as the place to tether buffalo and cattle to be sacrificed during the tiwah funeral ceremonies – but these ones were more likely built solely for ornamentation. Either way they were impressive. Note that all of the figures are standing on stylised ceramic jars – these are the balanga after which the Palangkaraya Museum (where Karen is working) is named. 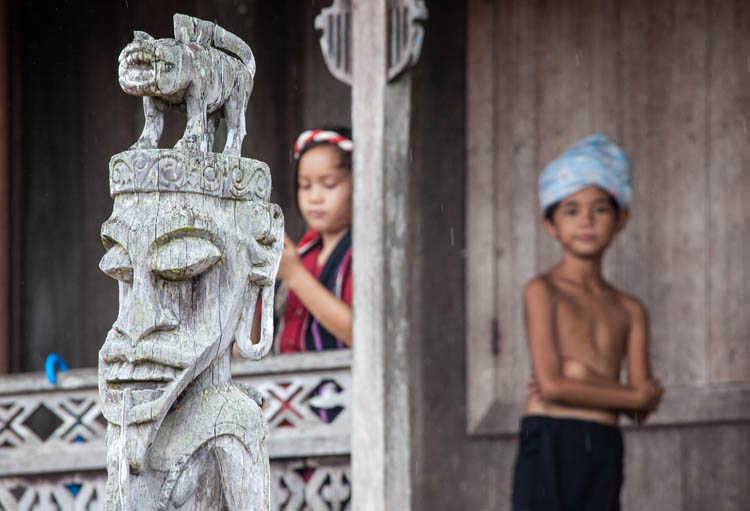 A traditional dance performance was under way inside the longhouse, and these children were waiting outside for their turn to perform. Nice cultural juxtaposition: the girl was texting friends on her handphone while she waited. 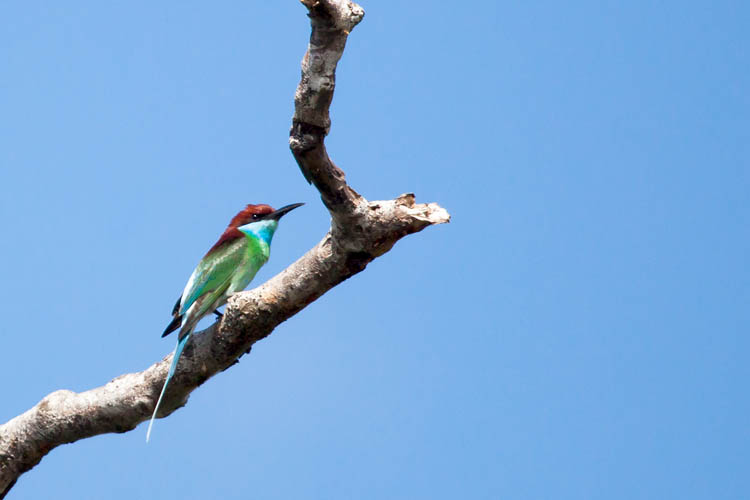 Not surprisingly, the wetlands are home to an abundance of wildlife. Lots of fish, and fishing is the main livelihood of people in the villages. There were macaque monkeys in the trees, and water monitors in the river. We saw (but DIDN’T manage to photograph), the widespread but endangered Irrawaddy Dolphin (Orcaella brevirostris [L], Pesut [I]). But the most visible wildlife are the thousands of birds. Terns, herons, egrets, eagles, babblers, bulbuls, flycatchers, swifts and swiftlets, kingfishers, drongos…

The bird above is a Blue-throated Bee-eater (Merops viridis [L], Kirik-kirik Biru [I]). Yes, it eats bees (and other flying stinging things), catching them in flight and carefully squeezing out the venom before eating. For some reason it (reportedly) ignores insects which are not in flight. 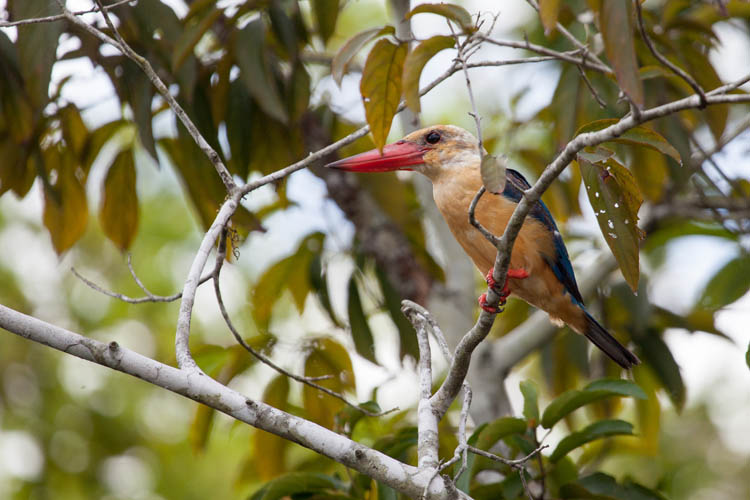 Stork-billed Kingfisher (Pelargopsis capensis [L], Pekaka emas [I]) This bird is listed as ‘uncommon but widespread’ (being found from India to Indonesia). It lives in forested areas near tropical rivers and lakes, and so its biggest threat is habitat loss. 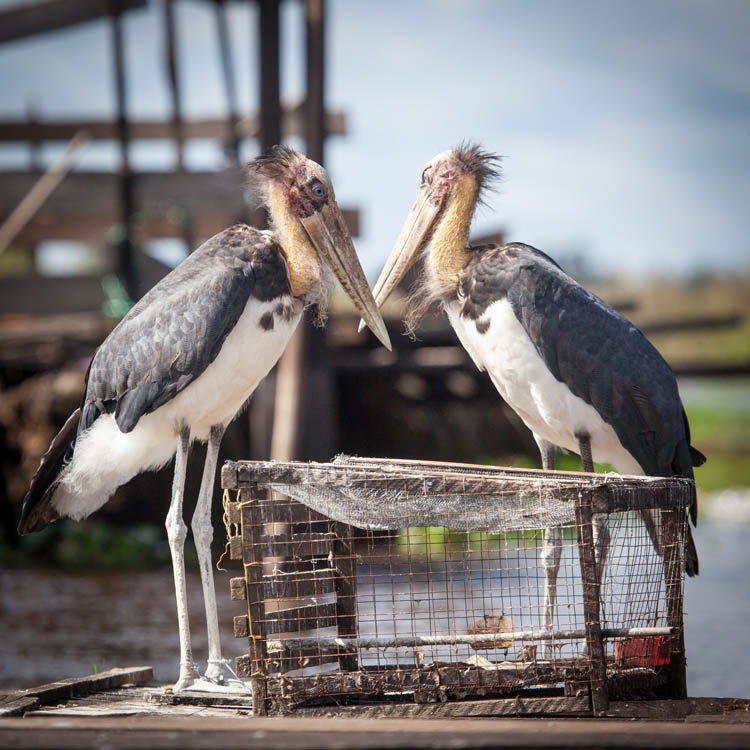 A pair of Lesser Adjutants (Leptoptilos javanicus [L], Bangau Tontong [I]) in Peregik village. These are big storks, more than a metre tall, and called adjutants because of their ‘military gait’ and habit of standing at attention for long periods. They are found in isolated communities from India to Indonesia, and a wild population does exist on the Mahakam. 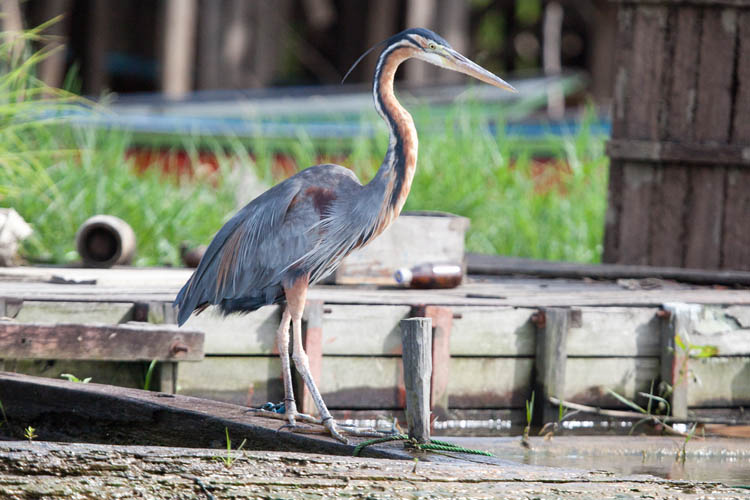 Purple Heron (Ardea purpurea manilensis [L], Cangak Merah [I]) in Melintang village. Like the Lesser Adjutants of Peregik village, this is a captive bird, though wild populations do also exist in the area. 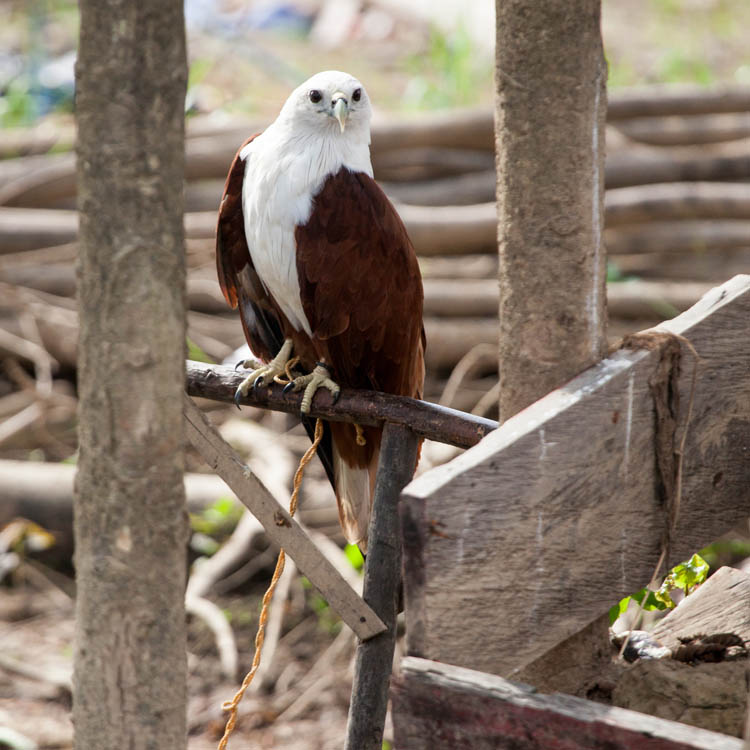 Another captive, this time a Brahminy Kite (Haliastur indus [L], Elang Bondol [I]) seen in Muara Muntai village. He looks healthy enough – but surely she (or he) can’t be happy to be restrained like that?

Bird trivia: the Brahminy Kite is the mascot of Jakarta city, and is regarded as sacred (and a manifestation of Singalang burung no less) by the Dayak Iban of West Kalimantan and Sarawak. 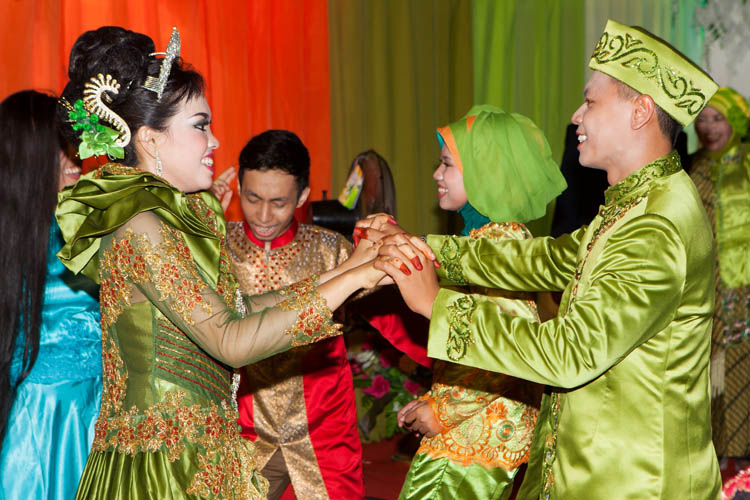 Finally, and almost inevitably, we were invited to a wedding reception (we think that makes eight now). This one was in Muara Muntai village. The bride, groom, and close family members were all resplendent in their shiny green and gold outfits. There was a very polished band playing well-known Indonesian pop songs, and lots of dancing. One interesting thing was that, apart from the groom’s one dance pictured above, none of the male guests danced. There were however two guys dressed in red and gold who came with the band, and they did dance performances throughout the reception, sort of like male go-go dancers. 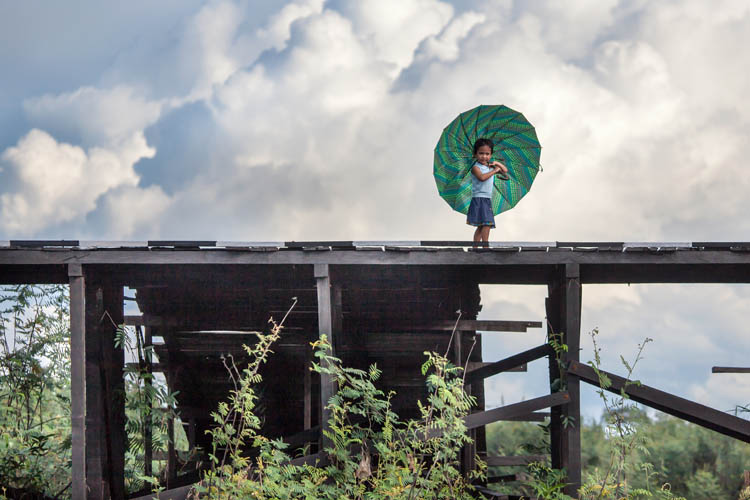