The Mahakam River runs for just under 1000km from the Muller Mountains in the ‘Heart of Borneo’ southeast to the provincial capital of East Kalimantan (Samarinda) and the coastal delta, eventually discharging into the Makassar Strait. 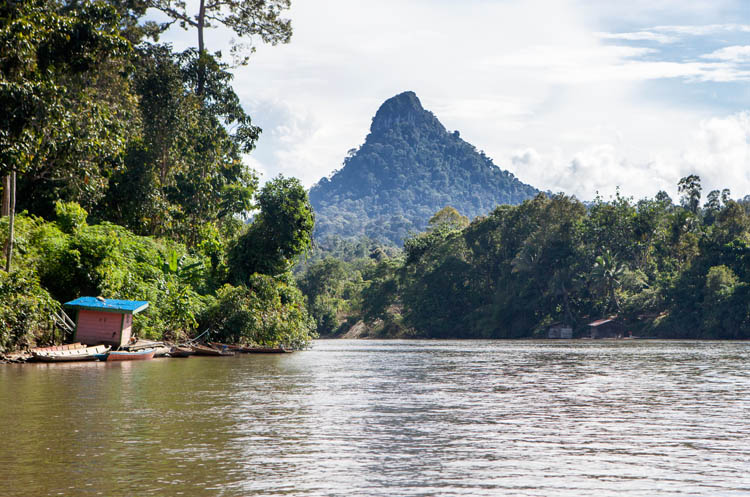 It’s very wide and muddy in its lower reaches, and narrow, almost fresh and punctuated by rapids nearer the headwaters. The Mahakam Lakes, an extensive region of shallow freshwater lakes, some only existing during the wet season, sit near the middle.

On the map it may not appear that we got far in those ten days. But it’s not an area that can (or should) be rushed – and the logistics of getting around can be complicated. Six hours on local buses to get from Balikpapan to Kota Bangun, three days on motor-powered longboats to explore the Mahakam Lakes, then 41 hours on a local passenger/freight boat to reach Long Bagun, around 14 hours on three speedboats to get up the rapids to Tiong Ohong and back again, and a final all-night car trip (with eight of us in the car) to get back to Balikpapan. But we enjoyed the challenge of organising it all as we went along, and it all came together rather nicely.

Our longest single stretch of travel was on a ‘kapal biasa’, the main passenger and freight vessels on the river. We spent 41 hours on board, delayed when the spotlight at the front of the boat stopped working, which meant that we could no longer travel at night for fear of colliding with the many large logs floating in the river. We slept on a platform upstairs, where there are spaces for 76 passengers, though thankfully it wasn’t full. Downstairs is crammed with cargo goods being delivered to the many villages along the way, and also with those passengers who couldn’t afford the $25 fare to travel in ‘luxury’ up top. 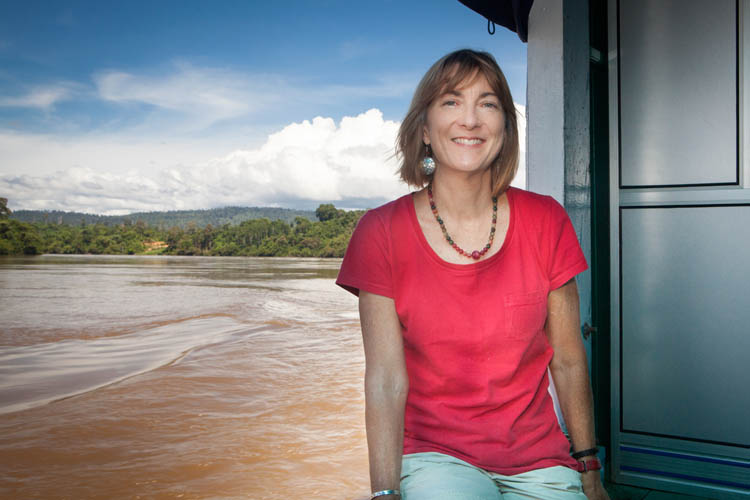 We really enjoyed the journey, spending much of our time sitting on a little platform up front from where we could watch the river, villages, forest and other vessels pass by. The river meanders continuously, the boat moved slowly with many stops, and the steady hum of the engines made for relaxing and contemplative travel.

However the facilities were somewhat basic. The shared ‘bathrooms’ have less floor area than a phone booth, with a big hole in the timber floor which doubles as the toilet and as the means of bathing. The latter is achieved by repeatedly lowering a small bucket-on-a-rope down into the river below to fetch pails of coffee-coloured fast moving water below with which to wash. 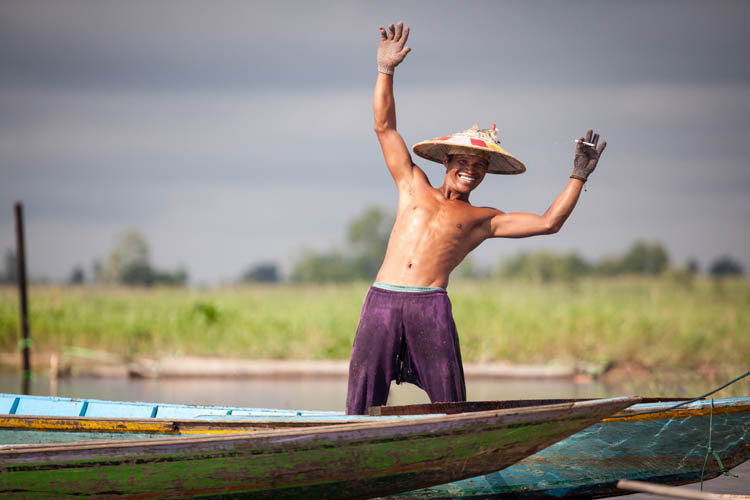 As always there were many people keen to wave to us as we passed, none more exuberantly than this guy who looked resplendent in his typical Kutai-style hat, cigarette in gloved hand. He was one of a team working at a timber mill which was mounted on a floating platform in the river. 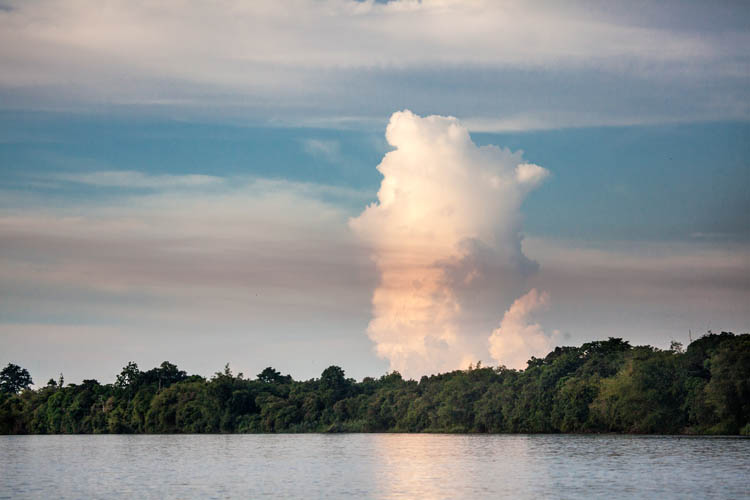 There are plantations (mostly rubber and oil palm) and gardens, but for most of the journey the banks were a wall of forest. Almost none of it is ‘primary’ (undisturbed) forest, with all of the accessible and high-value trees having been removed long ago. 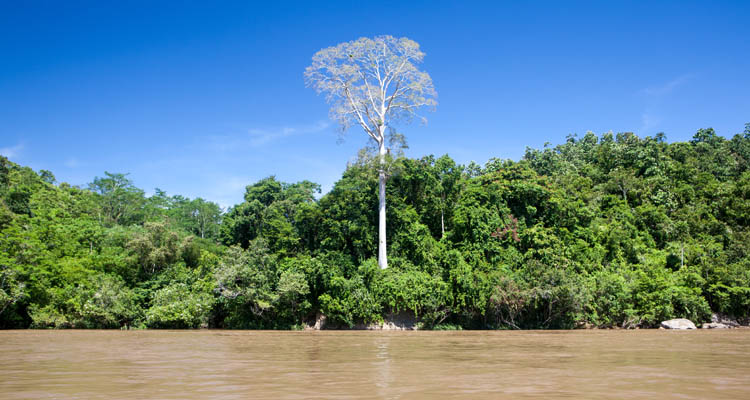 But logging (along with coal mining) is still the major industry up-river. The trees are usually felled some distance from the river, and brought by truck down rough forestry tracks to the river. There is no road to the mills in Samarinda, hundreds of kilometres downstream, so the logs are transported down the river. 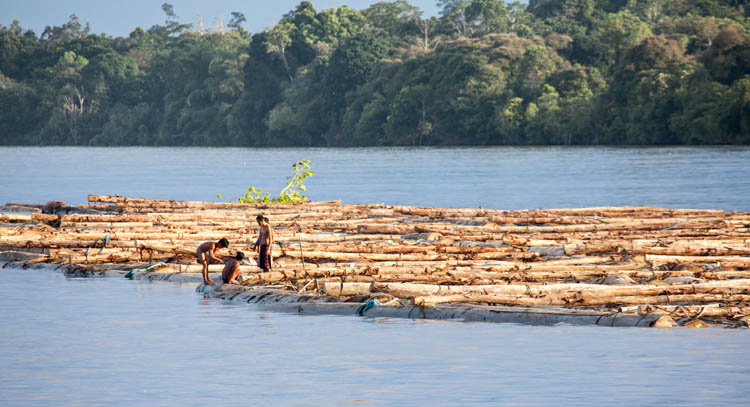 Once in the river, big rafts of timber are constructed by tying logs together with rattan and rope. These rafts can be a hundred metres or more from end to end, and it takes several days to journey to the mills. One or two little boats are used to pull and guide them, and a small team of men ensure that the raft stays tied together. These guys have great balance – falling between two logs could be nasty – and they seem to spend nearly as much time in the river as on it. 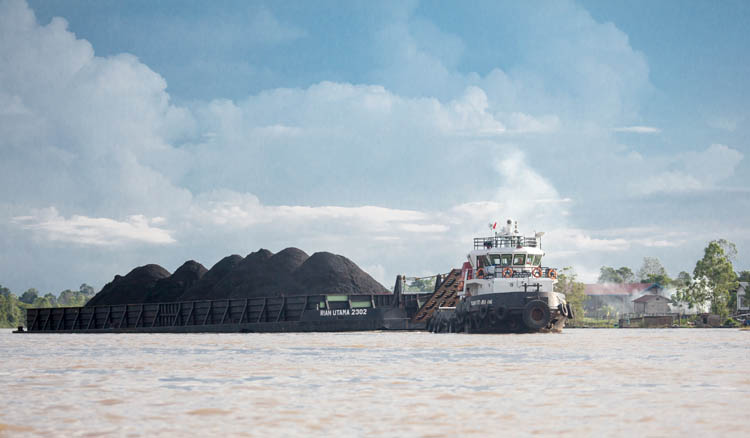 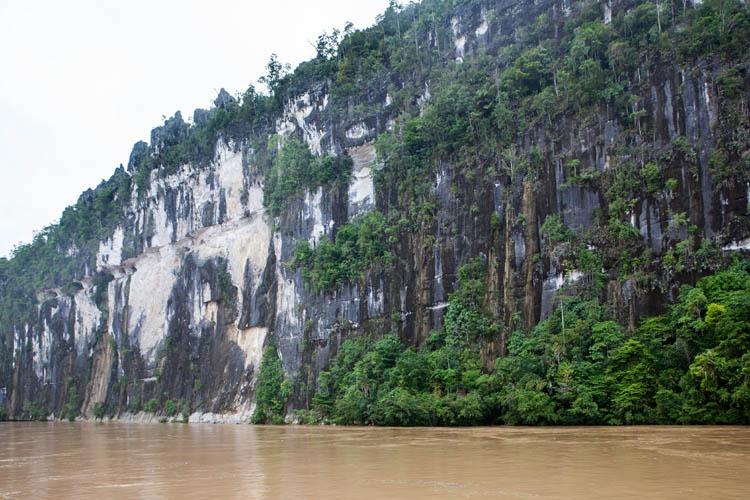 We stayed in Long Bagun village, where the kapal biasa terminates before the rapids upstream. As always, we met lots of interesting and friendly people. Traditional tattoos are still common, and the guy on the left above sported some of the finest dayak motifs we have seen. He seemed a little fearsome at first, until we read the tattoo across his chest which says (in English, a language he doesn’t speak!) “Love my Family”. The bloke in the middle was putting the finishing carving touches to a pair of wooden statues to adorn the front entrance of his home. (He also keeps a angry little pet monkey on a chain, which launched itself at Karen when she got close.) We met the couple on the right as they began their wedding ceremonies by visiting the homes of all of their family members in the village. 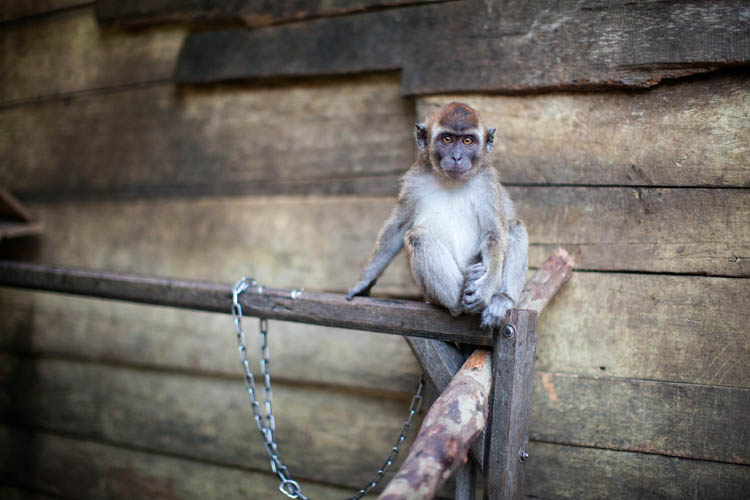 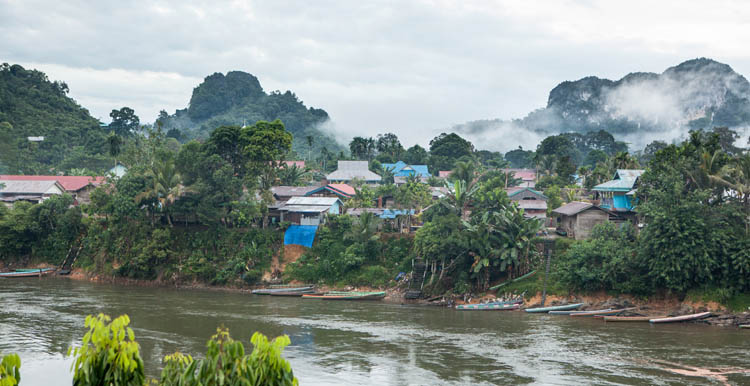 The last village we stayed in was Tiong Ohong. The six hour speedboat journey there from Long Bagun was sensational, negotiating several rapids, through deep gorges and deep forest. The rapids were pretty exciting, particularly after we were told about the boat that capsized a few months previously with the loss of three lives. We were quite happy to put on the bulky lifejackets offered to us. 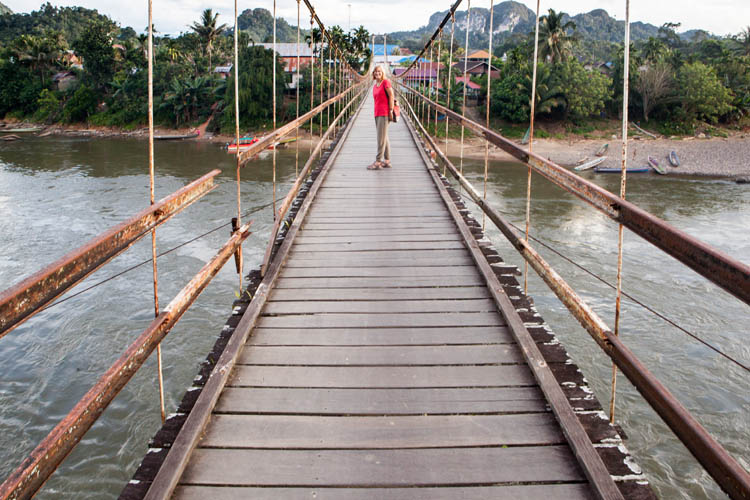 Tiong Ohong is actually two villages, (Tiong Ohong and Tiong Bu’u) facing each other across the river, with a suspension bridge connecting them. You cling to the side rail when motorbikes cross over.
The village is also the base for the seven day ‘Trans-Kalimantan Trek’, a very tough wet trudge through jungle and over the Muller Mountains to the Kapuas River in West Kalimantan. Mud, leeches, spiky vines and dozens of river crossings. People who have done the trek express ‘grim satisfaction’ on completion, and we are yet to find reports of anyone actually enjoying it.

But we stayed on the river, returning from Tiong Ohong to Balikpapan over the following two days, and we enjoyed every minute of it. 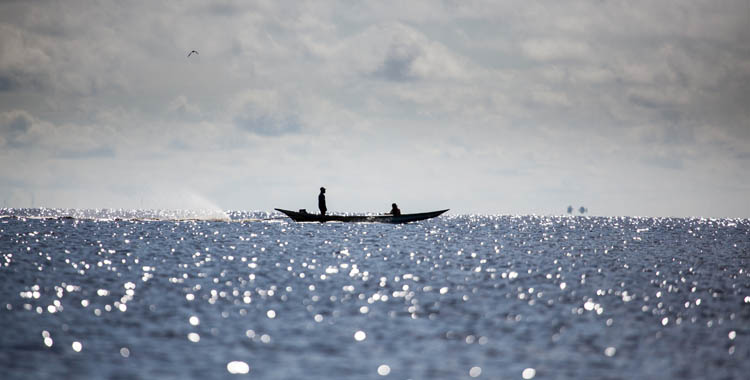