Posted on August 25, 2016 by John Boyd Macdonald| Leave a comment

Early on the morning of the 9th of March, a total eclipse of the sun was experienced across parts of Kalimantan, including right where we were living near Tangkiling. To mark the occasion, a series of dance performances were staged at Rungan Sari. 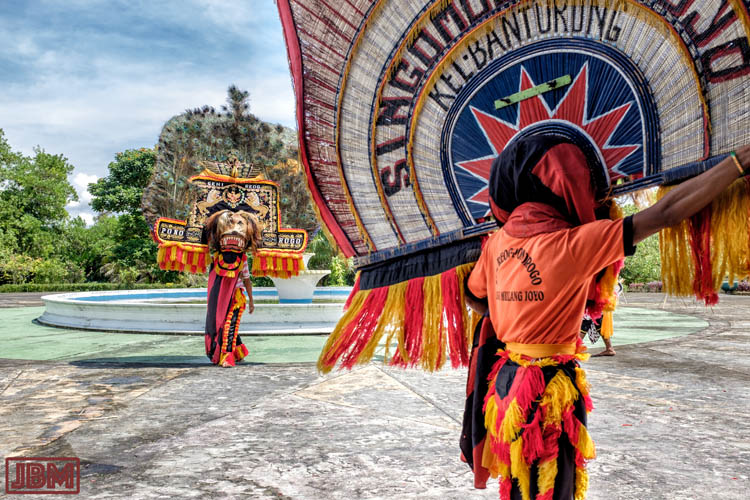 There were traditional and contemporary performances, from Kalimantan and Java – reflecting the makeup of the community – and it was spectacular. 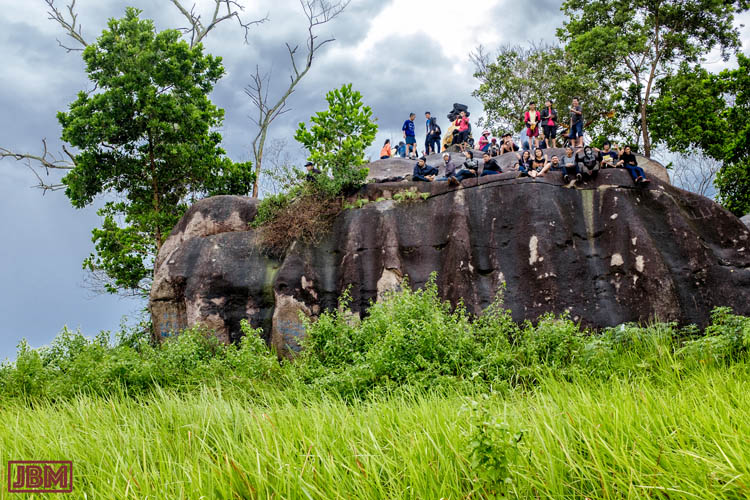 But the eclipse itself was less-than-spectacular, though still interesting. We got up early, just as a big thunderstorm arrived, and it proceeded to rain heavily for the next couple of hours. But we went anyway to Bukit Tangkiling (Tangkiling Hill). As the rain eased off then finally stopped, we scrambled up the steep but mercifully brief path to the summit, where around 200 other hopeful eclipse-viewers were assembled. 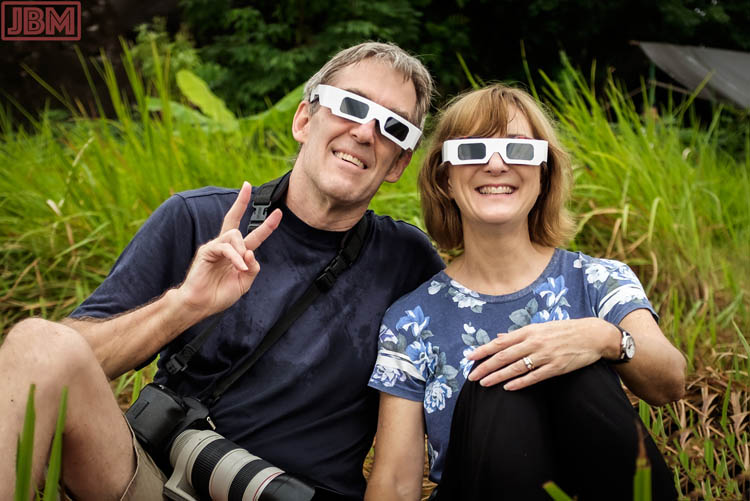 We responsibly put on our very cool cardboard-and-plastic eclipse glasses, but the sun stubbornly remained behind clouds as the shadow of the moon caused it to disappear and the early morning became eerily dark for several minutes. But behind our high-tech fashion accessory glasses, we couldn’t see a thing, so we reluctantly discarded them. At least the rain stayed away, and the shared sense of occasion was kind of fun. We’ve kept the glasses for next time… 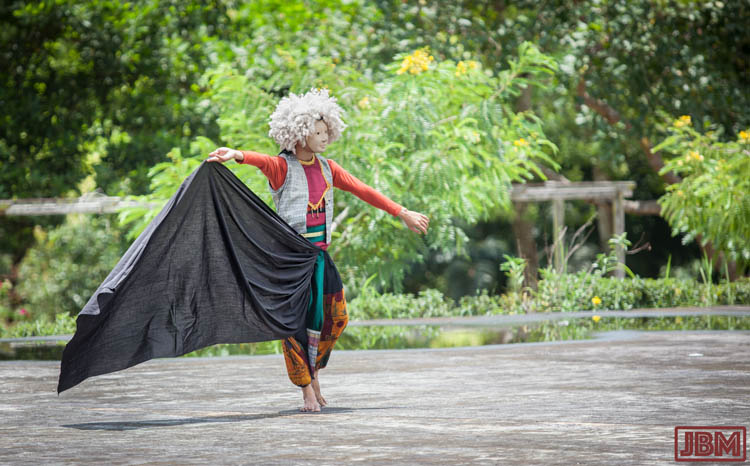 A couple of hours after the gerhana matahari, we were at the Muhammad Subuh Centre at Rungan Sari as the dance performances commenced. Far from being eclipsed, the sunlight had become very intense and the day was scorching hot. While a small audience sheltered in the shade of the MSC building, the poor dancers sweltered out in the intense equatorial sunshine. 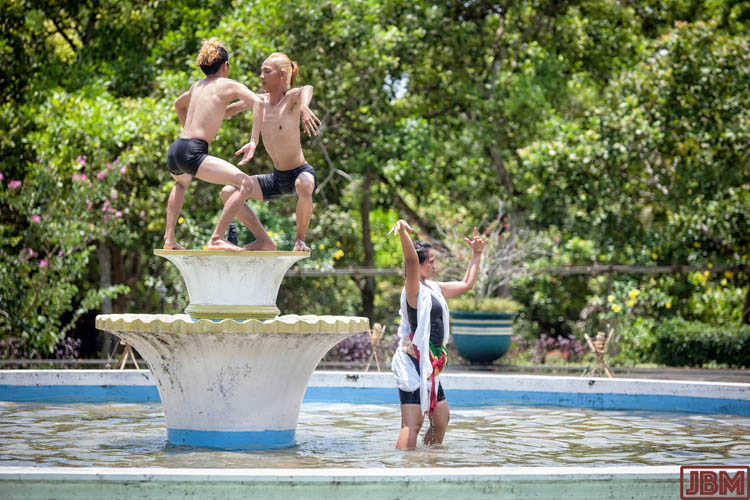 The first piece we saw was commissioned for and about the eclipse. It was choreographed in a contemporary way, but with strong traditional references throughout. It also made creative use of the landscape features of the venue – in particular the large fountain in front of the MSC. Sometimes the dancers paused motionless like garden statues (or perhaps like cormorants drying their wings!) 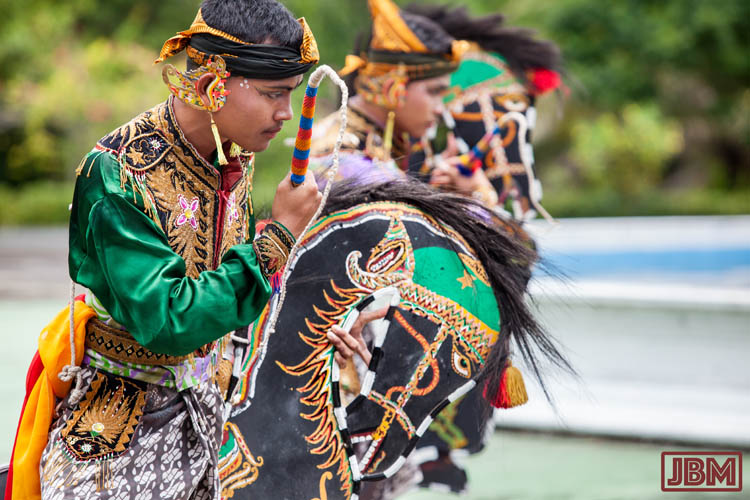 The next performance was a kuda lumping dance. In this Javanese dance, finely dressed warriors astride 2-dimensional hobby horses engage in mock battles and whip-cracking. The tradition of kuda lumping performance is very old, and its origins and specific meanings are now disputed and somewhat obscure, but there is always an aura of magic around it, especially when performers go into a state of trance.

The tradition is still very much alive in Java, and is carried on in the villages of Central Kalimantan by the many thousands of Javanese transmigrants who now live in KalTeng. 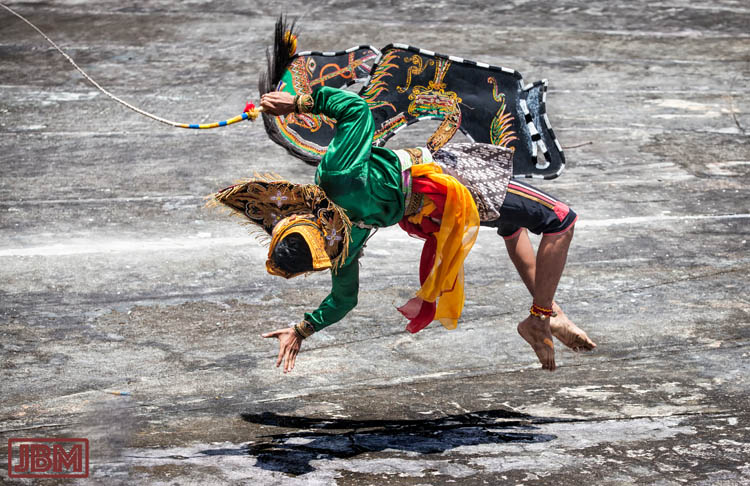 The acrobatics of the performers was sometimes quite breathtaking. 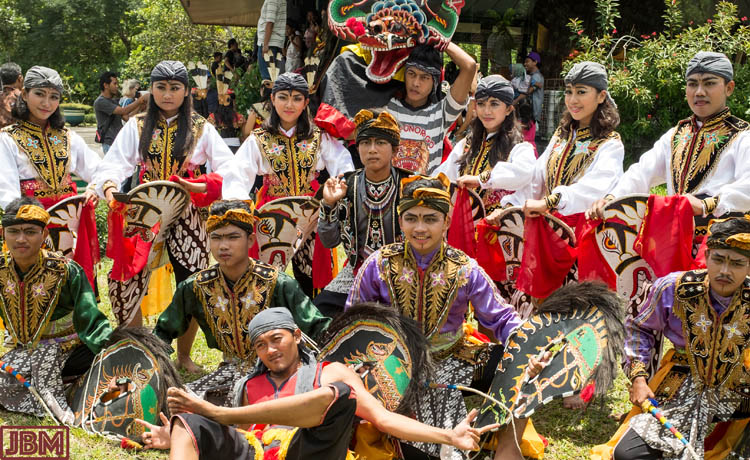 Unlike the kuda lumping shows that we had previously attended (e.g. here and here, none of the performers went into a state of trance. Rather, it was a very professional show put on by a well-rehearsed troupe of dancers. 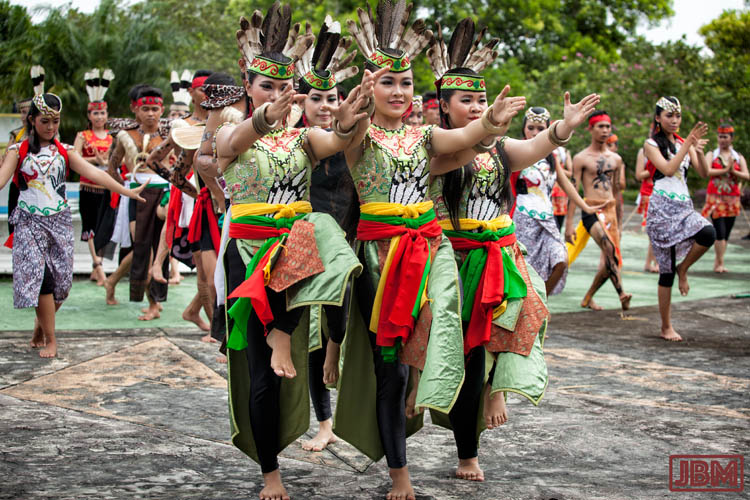 This was followed by a large-scale Dayak dance drama, with a very big troupe of finely attired performers.

There were ‘pastoral’ scenes of bucolic village life. 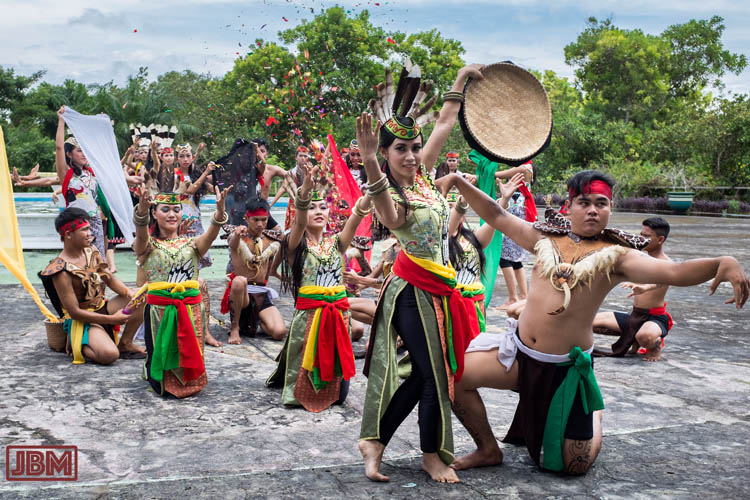 And there was a spectacular set-piece grand finale.

All the performers, along with many of the people most responsible for putting the show together, gathered for group photographs, and to receive the acclamation of the audience. 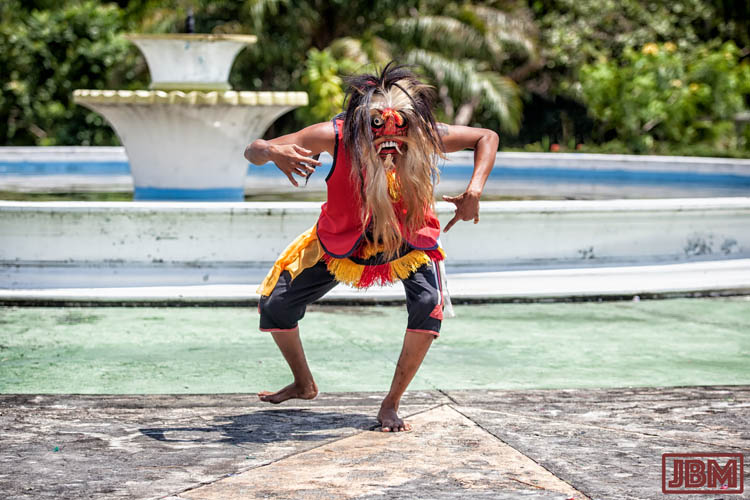 And then, when we thought it was all over, the Reog Ponorogo performance began…

This dance originates, as the name would suggest, from the town (now a city) of Ponorogo, in East Java, which sits in between the volcanoes of Gunung Lawu and Gunung Ngliman. Like the kuda lumping, its origins are ancient and somewhat uncertain, though it appears to have arisen in the 15th Century, towards the end of the era of the Majapahit kings. 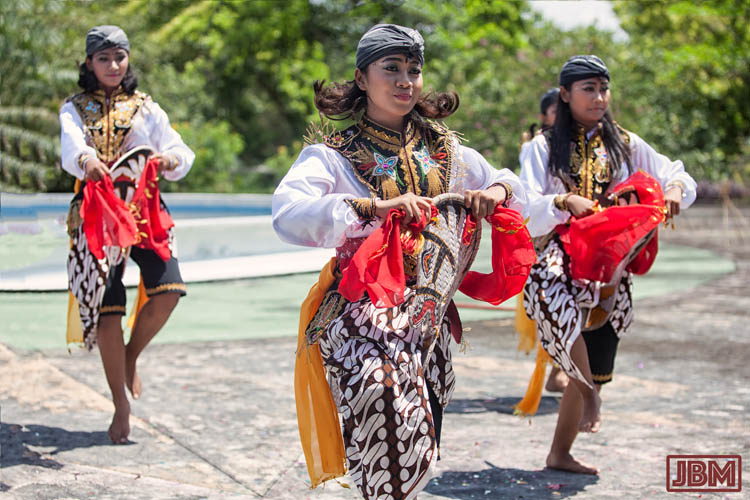 In fact, one part of the Reog performance, know as the jathilan, looks very much like kuda lumping, with dancers mounted on woven bamboo hobby horses. The jathilan dancers are now almost always young women, though in the past these roles were always performed by boys aged around 12 – 15 years.

The parang rusak motif on the girls’ batik cloth is actually not from Ponorogo, but is unique to Jogjakarta in Central Java. 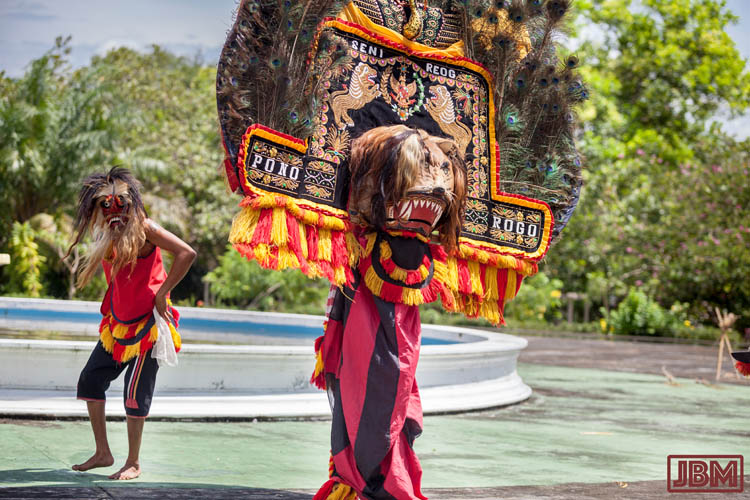 There are many different variations of the Reog Ponorogo performance, and several contending explanations of its origin and meaning. However, the broad synopsis of the Reog Ponorogo story is that in an ancient time, the king of Ponorogo (named Klono Sewandono) was travelling east to the town of Kediri to seek a bride (the Princess Songgo Langit). But on the way he encounters trouble in the form of the Singa Barong, a magical beast with the head of a lion, and a large fans of peacock feathers (or possibly an entire peacock) on top. Fighting ensues.

Bujang Ganong (the hairy red-faced fellow with oversized teeth on the left of the photo above) is the King’s messenger and ambassador. He is nimble, witty, and fiercely loyal to the King. His comic performances and interactions with the members of the audience has ensured that he is a crowd favourite, especially with children. Apparently he used to be only a minor character in the Reog, but since the 1980s he has become more central, and now usually has a long and quite acrobatic role. 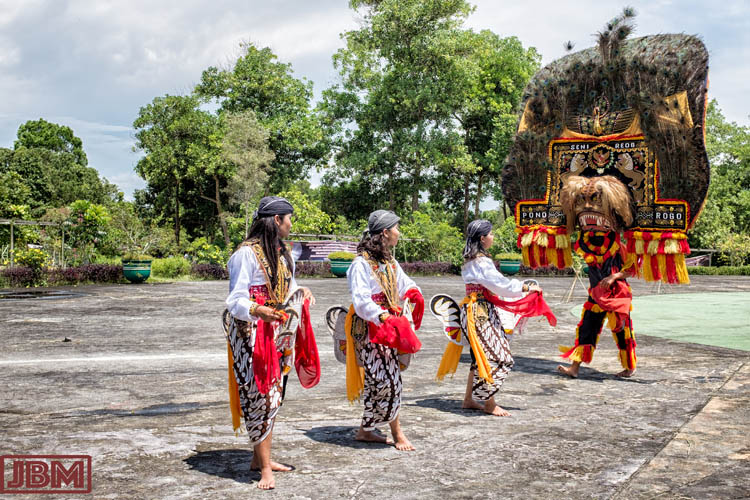 The massive and ornate mask of the Singa Barong can weigh 20 or 30 kilograms, and the performer (known as a Warok) holds it in place with his teeth! To perform this role, the Warok must possess reserves of both physical strength and spiritual power. This latter power is obtained (in part) by reining in the passions – for food, drink and lust for women – and a married Warok is expected to refrain from sexual relations with his wife.

The Warok have a special, independent and highly respected place in Ponorogo society, and are regarded as possessing magical powers. They had some (perceived or real) connection to the Partai Komunis Indonesia, and large number of warok were killed during the ‘anti-communist’ massacres of 1965-6.

Traditionally, a Warok would retain one or more of the boys who perform the jathilan dance as members of his household (known as gemblakan). This Warok-gemblakan relationship is a ‘special’ one, based on mutual love and mentoring of the gemblakan – and it is also openly sexual in nature. (Interestingly however, the relationship is not regarded as homosexual, and Ponorogo parents will be proud if their son becomes a gemblakan). Gender roles and relationships in Indonesia are often more complex than they at first seem!

But in recent years, social mores have changed to become generally more more uniform and more conservative across the country. The jathilan is now most commonly performed by young women – who do not have such a ’special’ relationship with the warok, and do not reside in his household. The Reog Ponorogo itself has also shed many of its magical overtones. It has become much more purely a performance for entertainment – at festivals, and as an adjunct to weddings and circumcision ceremonies. 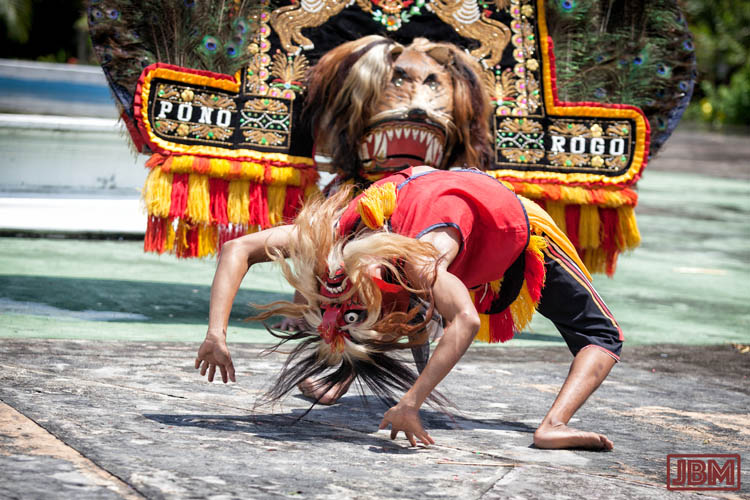 In the course of battle with the Singa Barong, the Bujang Ganong character made some great acrobatic moves. 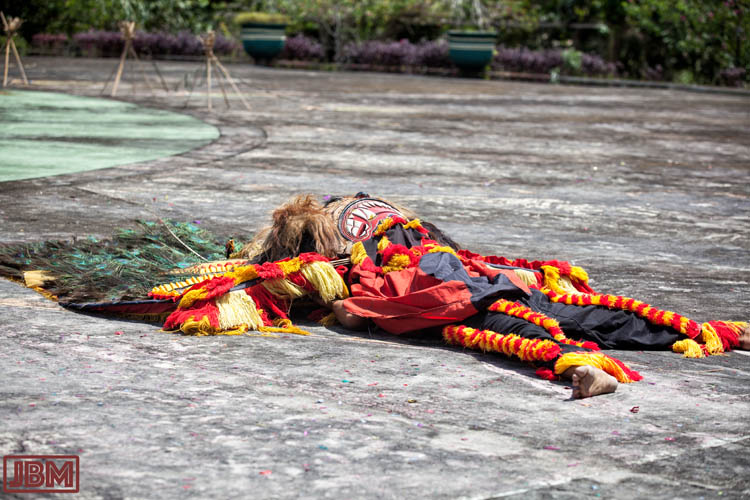 In the end, the Singa Barongs (there were two of them in this performance) were defeated – though whether by battle or by sheer exhaustion was not clear. One of the warok performers seemed physically distressed at times, and had to pause in his performance to drink water, and had to be tended by the director or helpers of the dance troupe (though apparently such interruptions are a common occurrence in Reog shows).

The performance was great entertainment, and impressive simply as spectacle. But, like so many cultural displays and cultural objects in Indonesia, a closer examination reveals it to operate in a number of dimensions in addition to the ‘merely visible’ – historical, political, magical/religious, and social/sexual. And we thought it was just a dance event!

It was certainly fascinating, and we plan to see further performances, as reog troupes are now found throughout Indonesia, and in a number of other countries also. We hope one day to make a visit to Ponorogo to view one of the performances held in the main square every full moon, or (even better!) for the annual Festival Reog Ponorogo.