The island of Borneo is deservedly famous for its butterflies (kupu-kupu in Bahasa Indonesia). There are masses of them, at least 939 species recorded in the Malaysian part of Borneo alone. And on top of that there are thousands of varieties of moths. The butterflies come in a huge range of colours, patterns, sizes and shapes, and many are stunningly beautiful.

We see a lot of butterflies, but haven’t yet managed to photograph many of them. They can show up and disappear quickly, usually when I don’t have a camera at hand, and they stubbornly refuse to stand still while I photograph them. Here are some that were kind enough to pose for me. About half of them were photographed ‘in the wild’, and the others were found in the wonderful ‘Butterfly Room’ at Singapore Airport (Terminal 3) 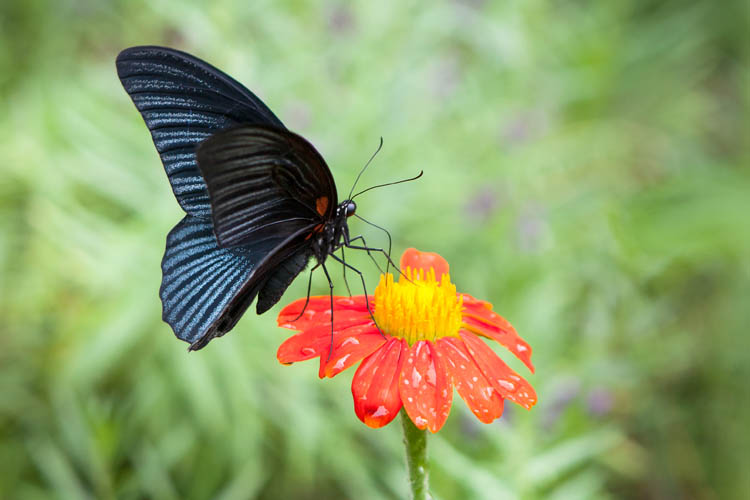 The Great Mormon (no I don’t know how it got that name…) is a large and very elegant butterfly, and it is actually fairly common. This butterfly (or one of its 13 subspecies) can be found from northeast India across to China and Japan, and down as far as Australia. Lucky for us, they are attracted to many domesticated plants, and are often found around home gardens.

We have seen them regularly, and I have even managed to photograph them in three locations in both Central and West Kalimantan. This one above was in one of the herb and flower gardens at work, and kept coming back to feast on the nectar of the flowers. 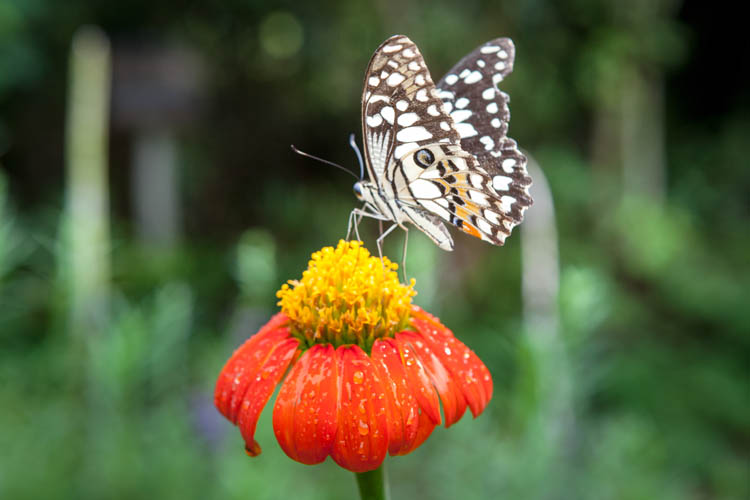 This butterfly is not only attracted to flowers of the lime plant, but to all kinds of citrus. Like the Mormon, they are members of the ‘swallowtail’ family, are quite common and are often found in and around home gardens.

It might sound like an oxymoron, but this is an aggressive butterfly. It is highly adaptable, fast breeding, and has now spread to almost all parts of the world – including Borneo, where it was not originally found. In many locations, particularly places with citrus plantations, it is regarded as a pest. It’s also fast flying and restless, so it can be hard to capture in a photo before it flies off. 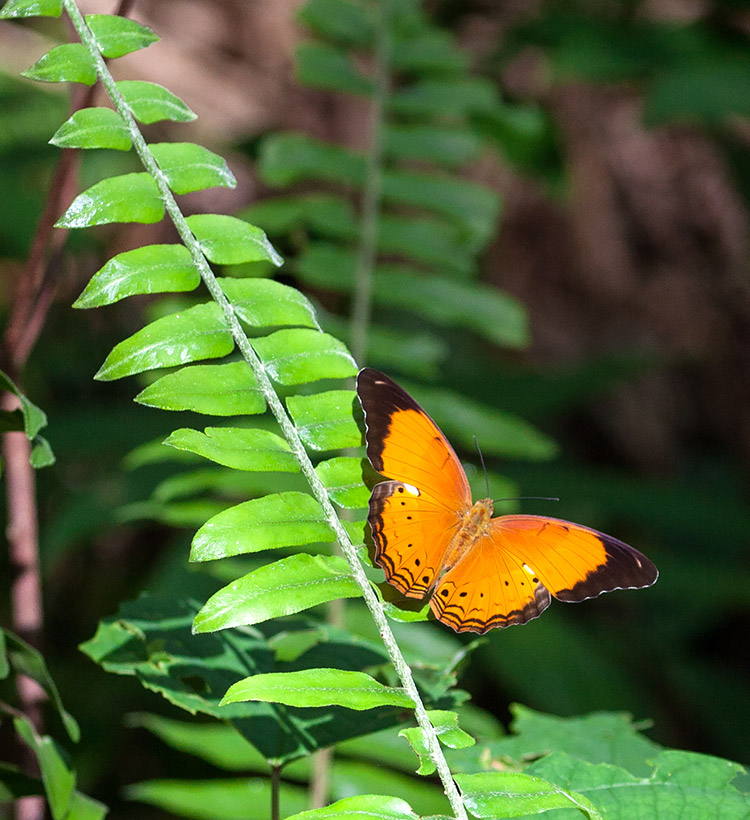 The Malay Yeoman is often found around the edges of forest areas, as was this one above, which we saw in a protected patch of forest amongst logging concessions in the upper Katingan river. 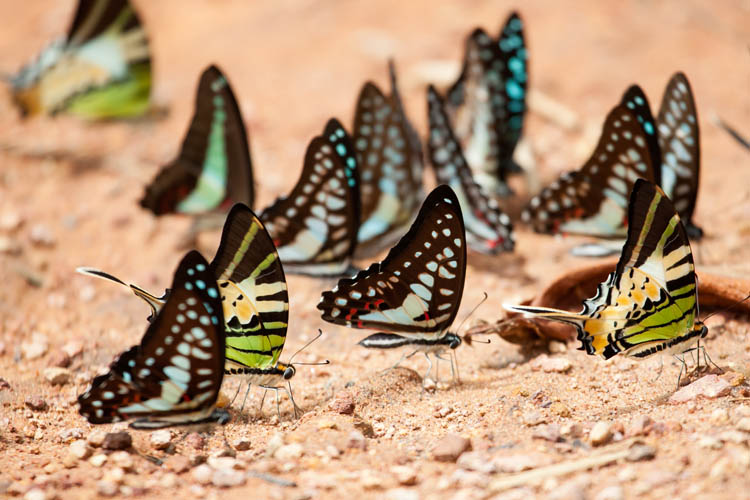 Emerging from the bush onto a dirt road after a hike in jungly forest near Tumbang Manggu, we came upon a mass of butterflies in a genteel frenzy, swarming onto the sandy road surface. This beautiful delicate scene is apparently an instance of ‘mud-puddling’, a common behaviour of insects whereby they extract salts and other nutrients from wet soil, dung, decaying fruit, carrion – even the blood, sweat, and tears of animals. We were told that the butterflies above are attracted to urine. It rather took the shine off the pretty scene, and made me uncomfortable about lying on my stomach to take the photo!

According to the Butterfly Circle website, the Common Bluebottle (the blurry blue-green butterfly in the photo above) can often be found feeding on “roadside seepages or urine-tainted sand”. The site goes on to say that it “is frequently found in the company of the Blue Jay and the Five Bar Swordtail”. We can confirm that, as those are the three varieties of butterfly in the photo! 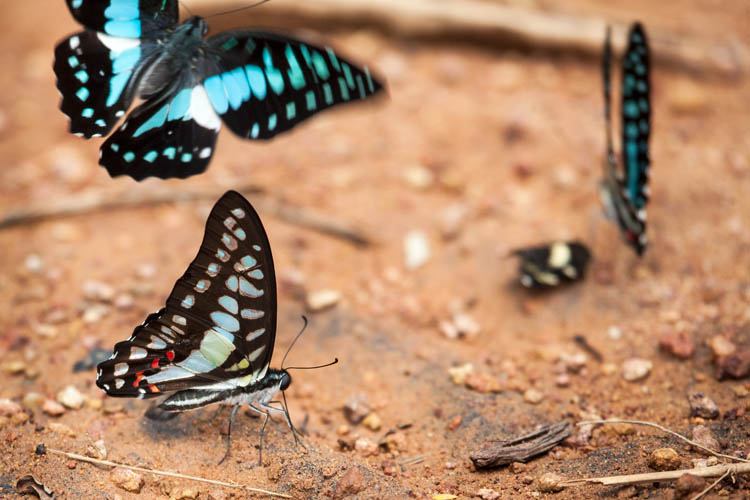 Some more Blue Jay butterflies (not to be confused with the bird – or the baseball team – of the same name) feasting on the urine-soaked sand. Yuck. Like many butterflies, they have quite different patterns and colours on the tops and undersides of their wings. 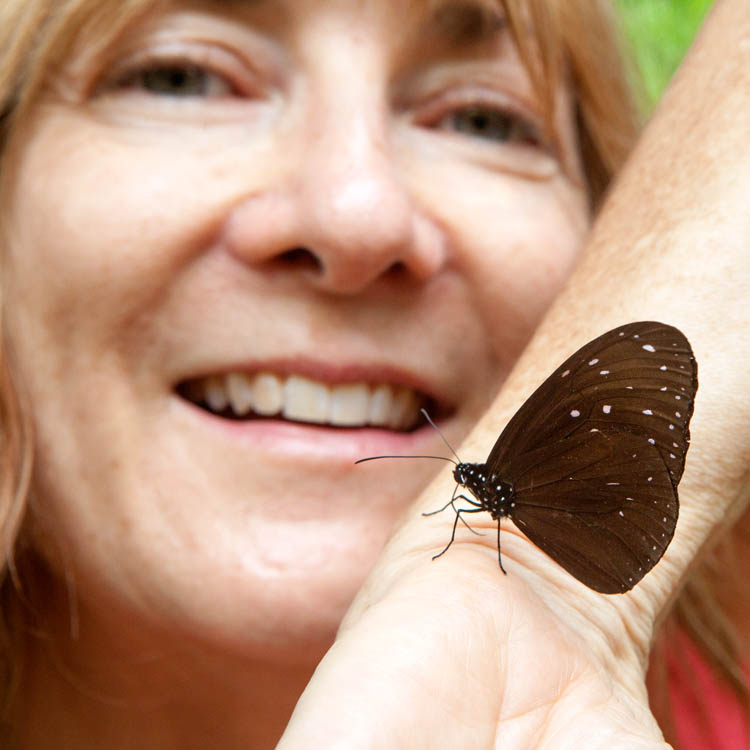 This butterfly kept landing on us. We’ve been told that they do that because they like the saltiness of perspiration, but we reckon it was just being friendly.

The species is called a ‘crow’ because of its dark colour, but that’s where the resemblance ends. In the caterpillar stage, they feed on milkweed plants, and so the adult butterfly is poisonous, and is avoided by predators. Some other unrelated species, which are not poisonous, have evolved to resemble the ‘Crow’ so as to get the same protection from predators. 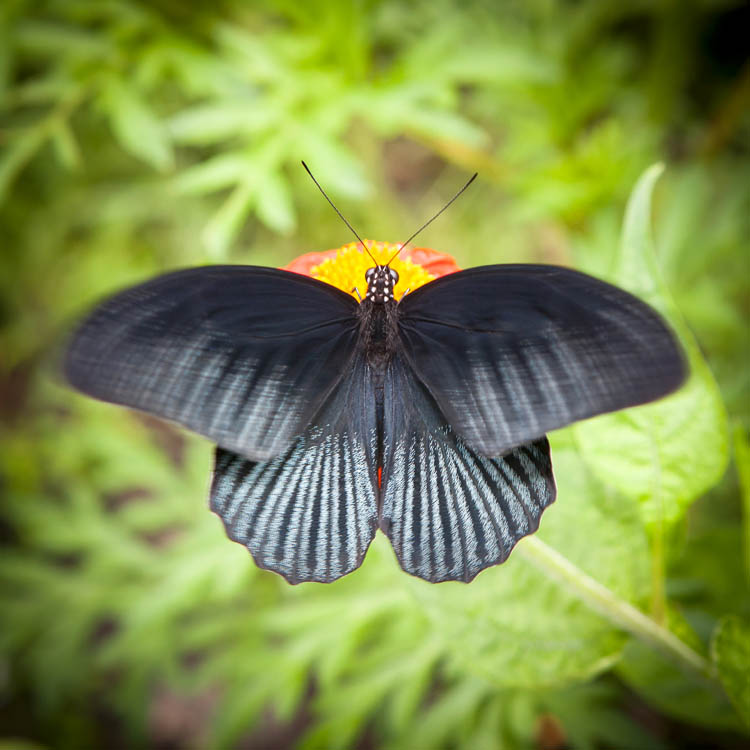 I like the symmetry of this photo. This butterfly is a male; the female is quite different, not blue-black like the male but a sort of sepia brown colour, and is much less common. 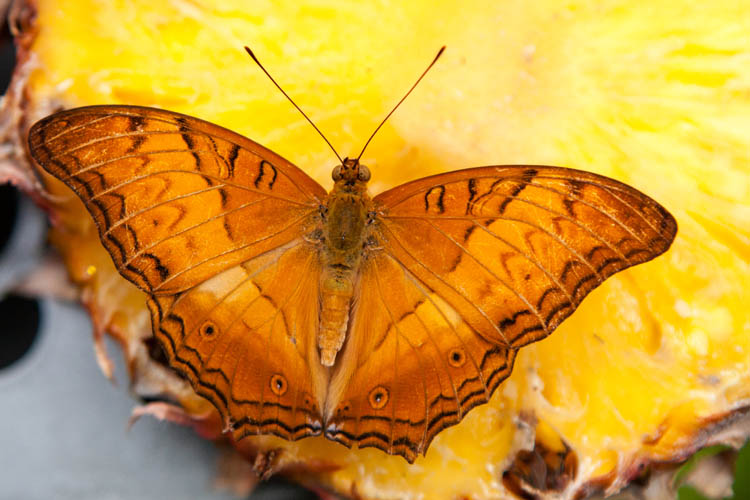 Frequently seen, although anything but ‘common’ in appearance, this cruiser is so named because of its regal flight pattern, cruising around the forest like it owns it. It is found from India right across Southeast Asia. 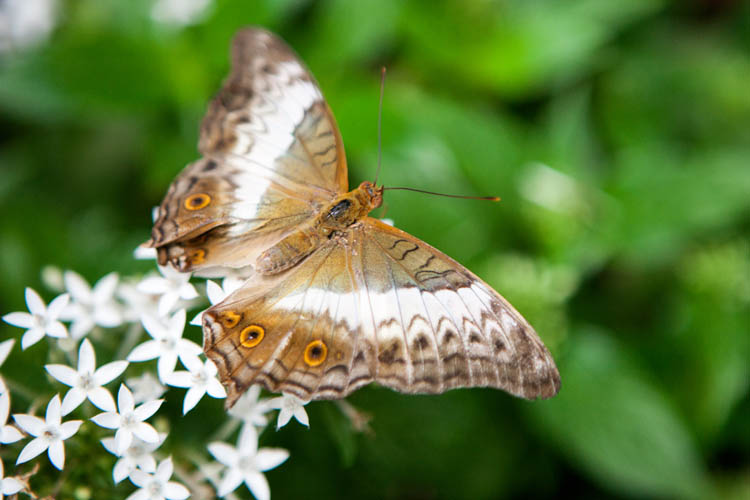 The female Cruiser is bigger, with an overall greenish-grey hue, and a big white stripe. As well as being sexually dimorphic, the Cruiser also has very different forms depending on whether it’s wet or dry season. So there are four quite distinct adult forms. 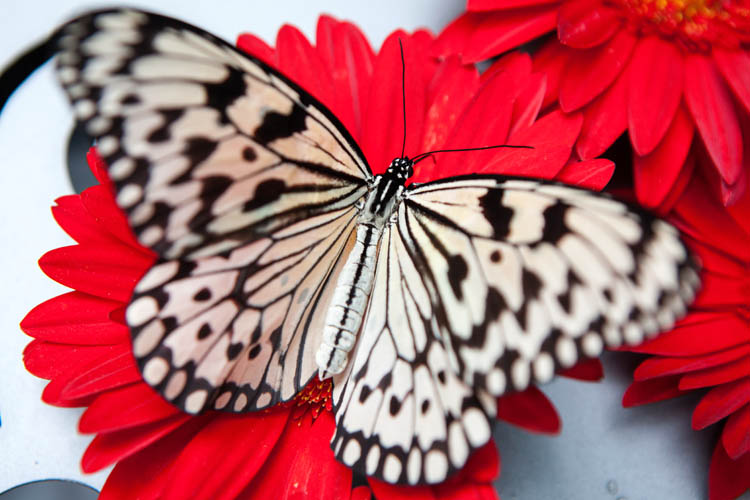 The Tree Nymph (also known as the ‘Paper Kite) is found across much of Southeast Asia, though in Indonesia only in Sumatra and Kalimantan.

Like the Malayan Crow, it eats milkweed in the caterpillar stage, so it is unpalatable for birds and other predators. With those big wings, it is able to fly by gliding as much as by flapping, and it sometimes looks like it’s floating. It’s very pretty… 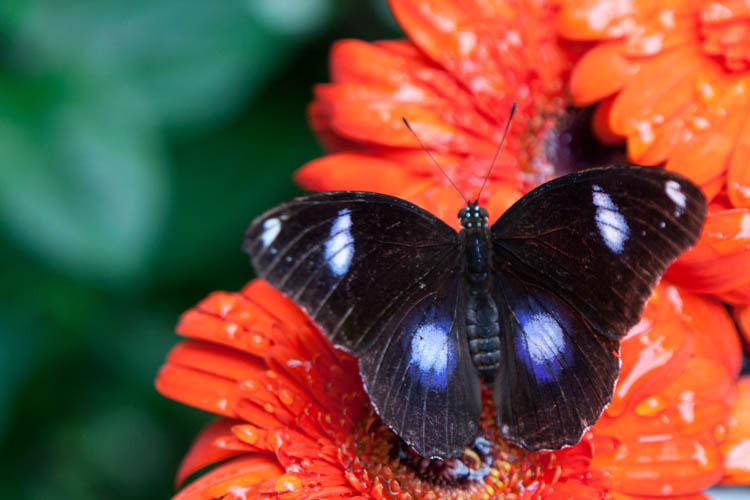 The Great Eggfly (where do they get these names?) is found fairly commonly from Madagascar right through to New Zealand (where they call it the ‘Blue Moon Butterfly’). The female looks quite different, mostly brown and without the distinctive spots of the male. 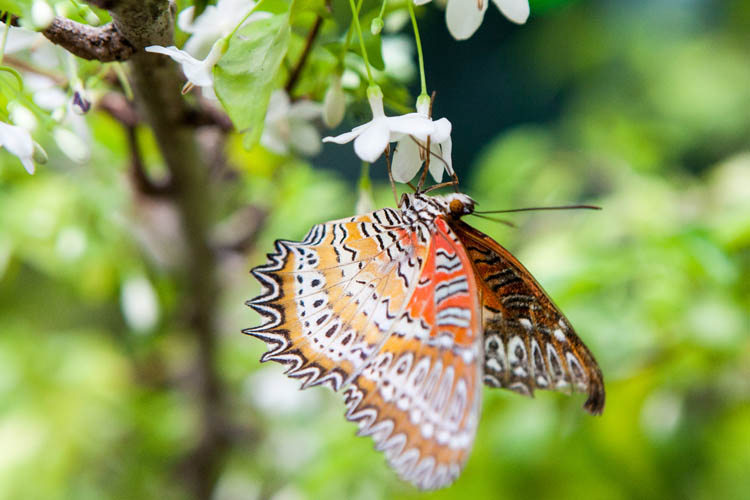 This beautiful butterfly with lovely scalloped patterns along the outside of the wings is another poisonous one (not that I could imagine wanting to eat one). It’s a forest dweller. 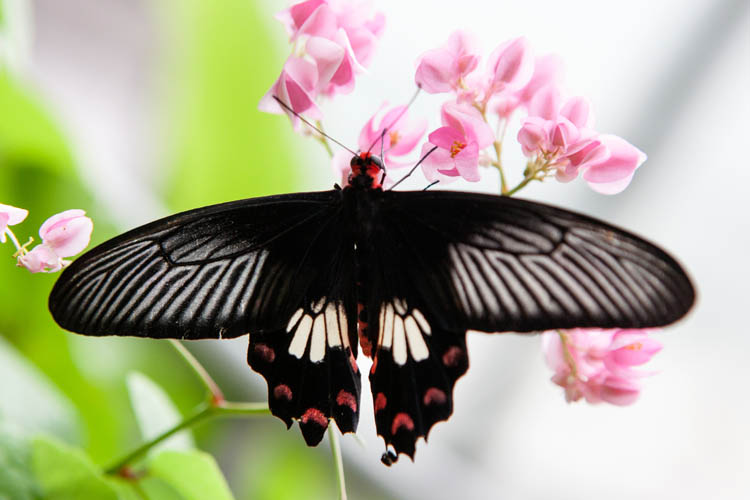 I don’t understand why this butterfly came to be known as the ‘Common’ Mormon. It really deserves a name more in keeping with its beautiful and elegant form. ‘Exquisite Mormon’, perhaps? 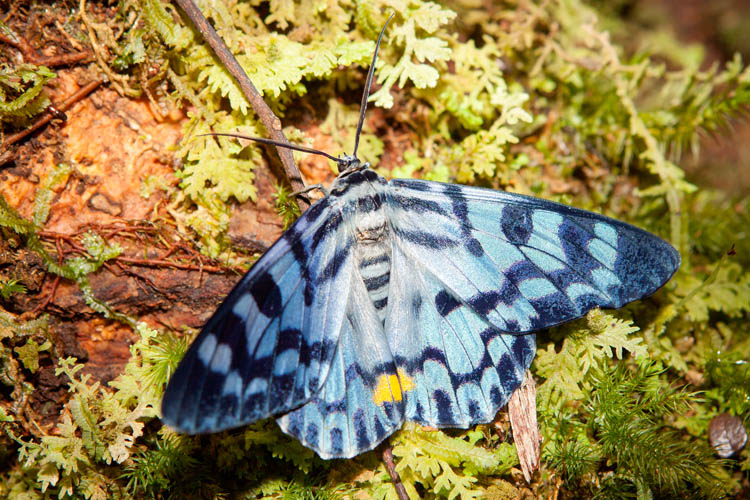 We saw this gorgeous butterfly in the forest of the Kelabit Highlands, in Sarawak close to the Indonesian border.

So far I haven’t been able to find it listed in any of the butterfly catalogues, and we’ve settled on the improbable conclusion that it’s never been seen by humans before. That would give us ‘naming rights’, so we’d like to call it Kupu-kupu jokarus tyrannosaurus. (But perhaps I should first have another look through the catalogues).

And below are a couple of others that I haven’t been able to identify (yet). Suggestions, anyone? 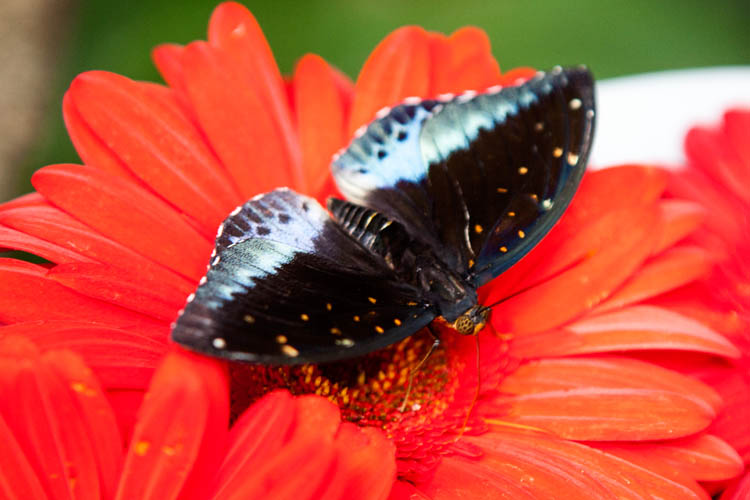 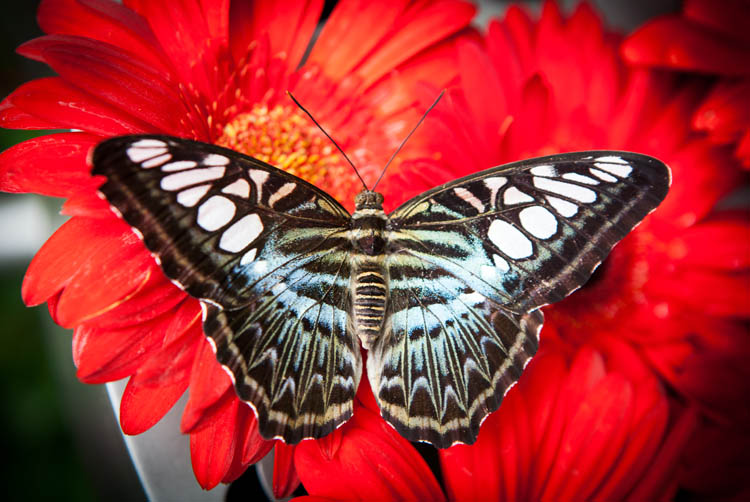