Posted on March 31, 2016 by John Boyd Macdonald| Leave a comment

We recently travelled to the Dayak village of Bangkal on the Seruyan River, 300km to the southwest of our Kalimantan ‘home’, to attend a Tiwah – Dayak funeral ceremony. It was our fourth Tiwah – the previous ones were on the Kahayan River at Kampuri, and on the Katingan River at Tewang Rangkang and Tewang Rangas. Like the others, it was extraordinary and included many rituals unique to the local area.

But I’ll write about the Tiwah at another time – I haven’t yet figured out how to compress the five days and nights of ceremonies (not to mention my 2100 photos!) down into a manageable and meaningful narrative. In the meantime, I wanted to write a little about a related topic – the sapundu of Bangkal. 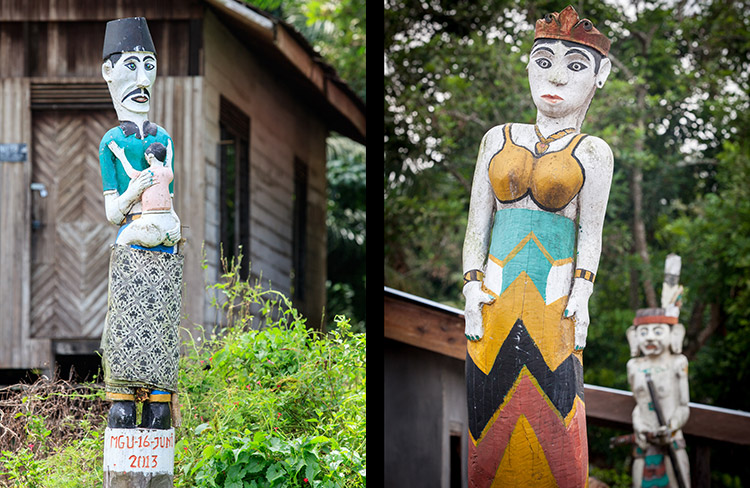 Sapundu are wooden poles, usually about 30-40cm diameter and 2 – 3 meters tall, with a stylised human figure carved at the top, and often various other objects, motifs, symbols and decorative elements carved below. In the ‘Hindu’ Kaharingan (Dayak animist) religion of Central Kalimantan, one or more sapundu is made for the important ceremony of Tiwah. The Tiwah is the biggest and most important ritual event in the Kaharingan religion, as it is when the soul of the deceased is helped on their journey from the mortal world to the ‘prosperous village’, the Dayak heaven of Lewu Tatau*. 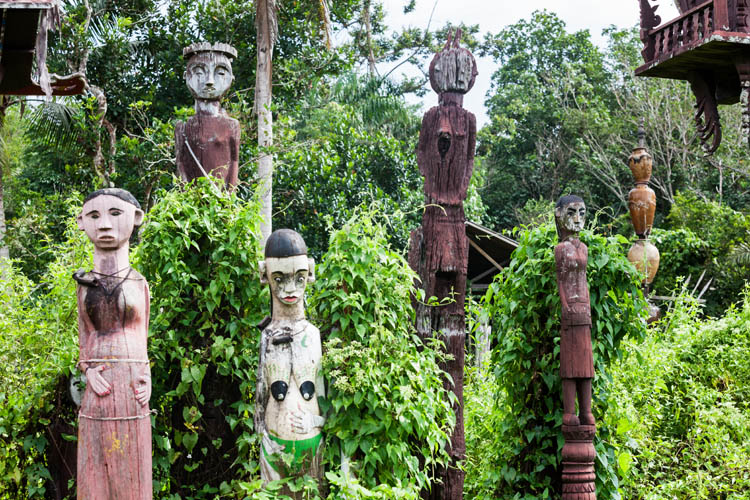 The sapundu of Bangkal village are special because of their great variety and quality. And also because there are just so many of them – more than we’ve seen anywhere else, in front of dozens of houses in this village of 2,600 people. 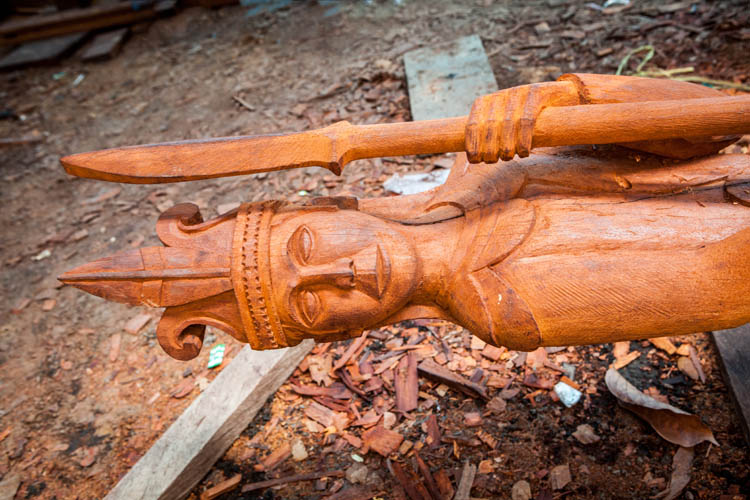 A local artisan (a tukang kayu) will carve the sapundu. Often the figure carved will resemble the appearance of the deceased person. A man who had been soldier may be depicted in uniform, a proud mother may be holding a child etc. But the tukang kayu is free to carve whatever form they are inspired to, and the sapundu may not even be the same gender as the person it commemorates! (The sapundu in the photo above was not actually in Bangkal village, but was being carved in the village of Tumbang Manggu, on the Katingan River.) 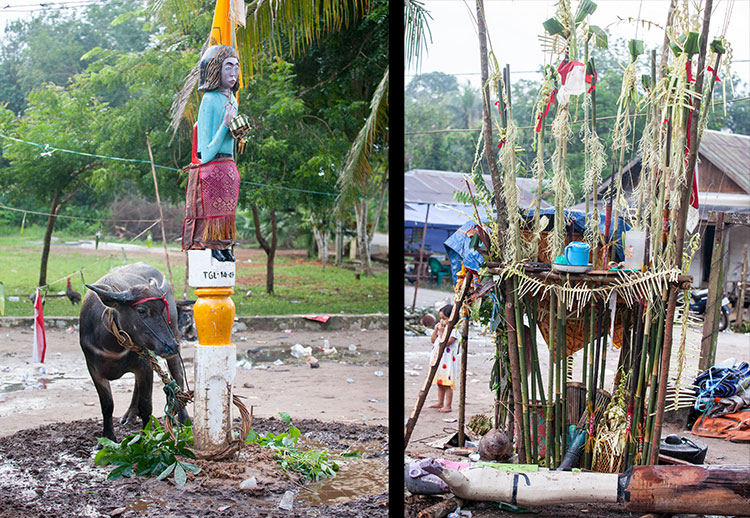 During the Tiwah, buffalo and cattle to be sacrificed are tethered to the sapundu with a rattan halter. Nearby a sankaraya is erected out of tall bamboo, adorned with offerings for the spirits (of rice, meat, flowers, cigarettes, baram rice wine and sirih), gongs, spears and various other objects. In the photo above right, a second, smaller, sapundu can be seen lying on the ground. 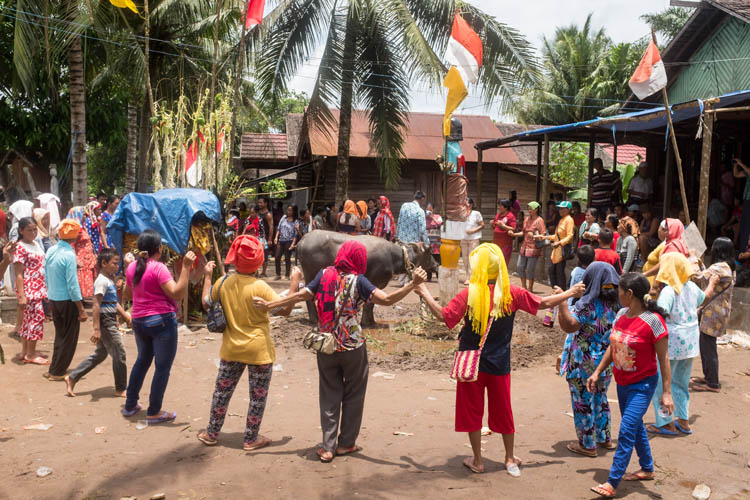 The sapundu and the sankaraya are the focus of ceremonial dancing and other ritual activities during the Tiwah. 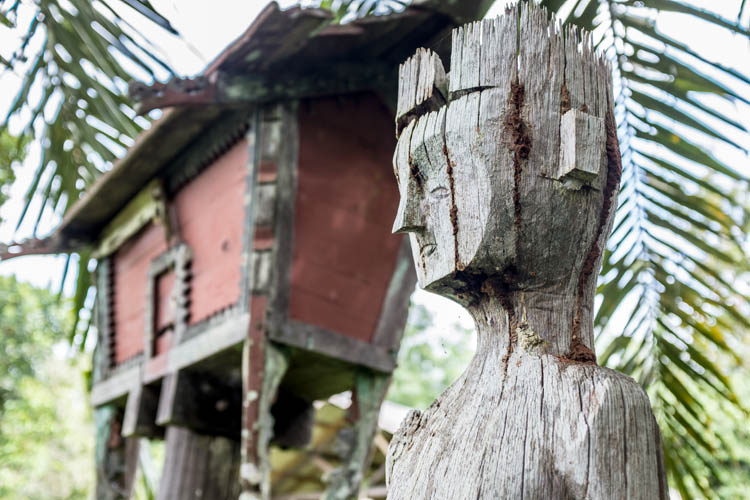 Sapundu are frequently located in front of, or adjacent to, the sandung containing the bones, ashes or body (depending on local practice) of the deceased. Often this will be one of the ‘secondary’ sapundu i.e. one that was not used for tethering sacrificial buffalo or cattle. 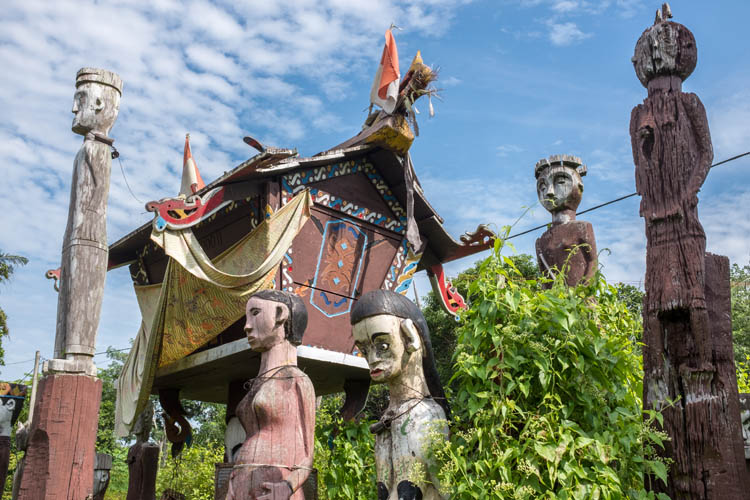 As one sandung may be used to hold the remains of a number or family members (sort of like a family mausoleum), the sandung can end up surrounded by a cluster of sapundu, of various styles, ages and states of repair. 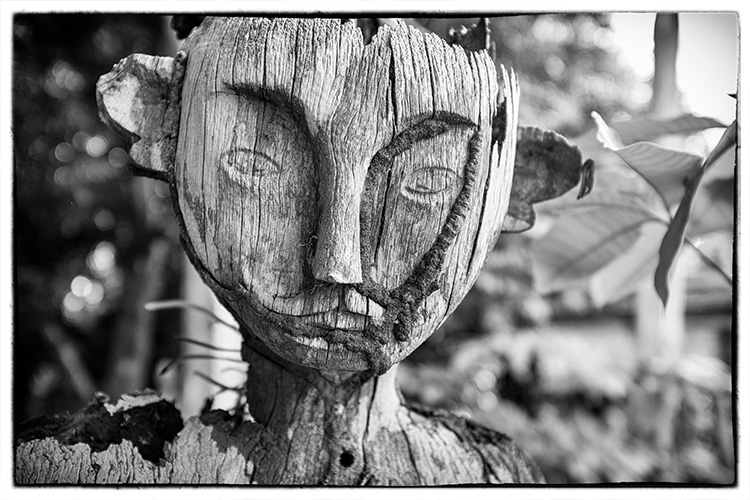 A sapundu should be made from kayu ulin (Bornean ‘ironwood’, Eusideroxylon zwageri), a remarkable but now rare forest tree. Ulin is a dense timber with a fine and even grain, and is highly durable, being resistant to water, insects, fungi and bacteria. But a sapundu which has stood outside in the tough Kalimantan climate for a hundred years or more is going to show signs of decay, and to display an attractive patina of age as it starts to break up. 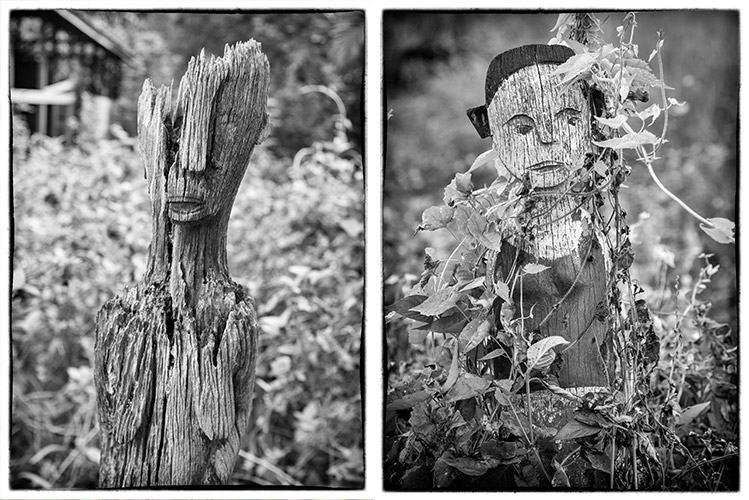 The timber cracks and gets colonised by moss and vines. 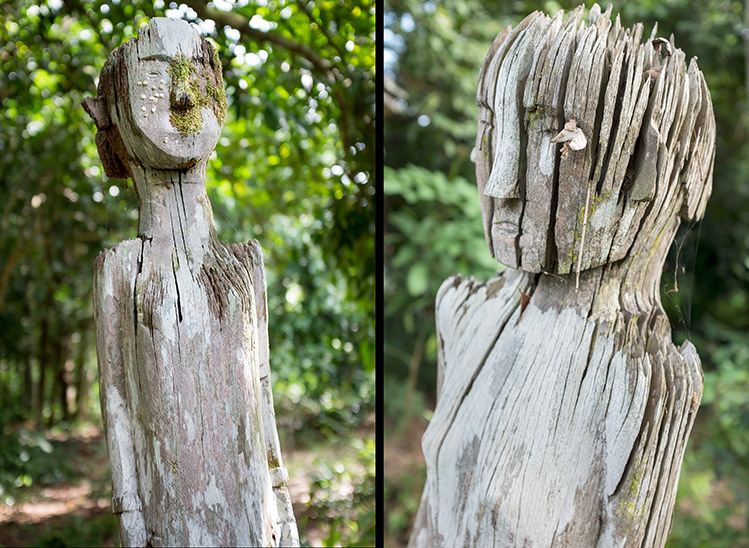 Families move or simply forget, and there may be nobody left who remembers the name of the person that the sapundu was built to commemorate. 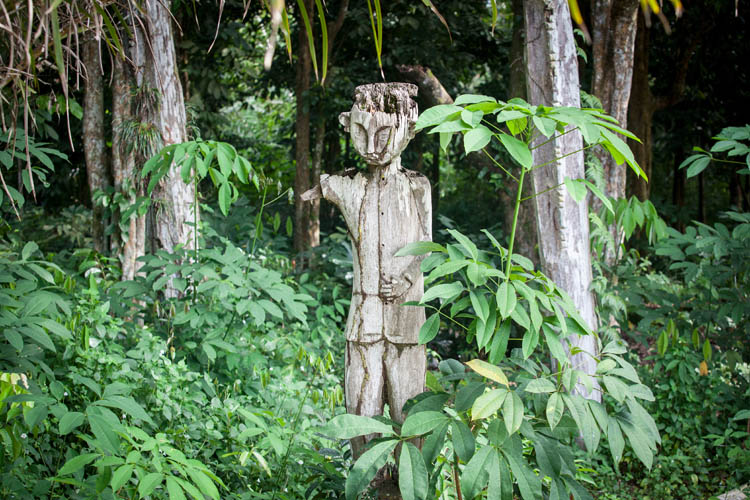 Over time, they may be reclaimed by the forest. 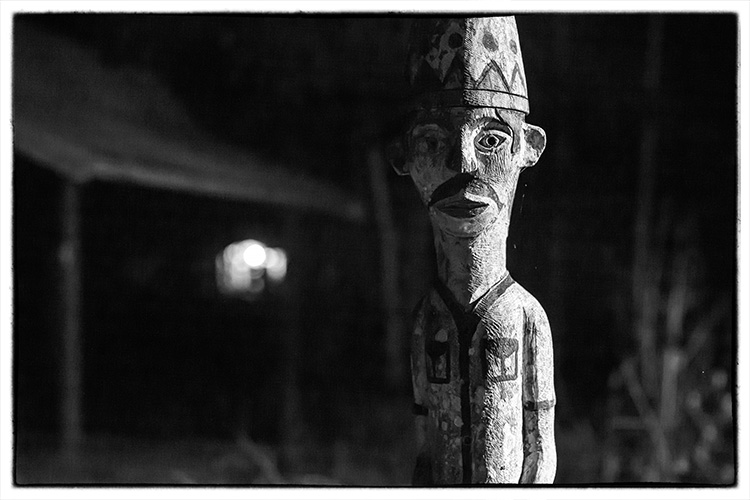 At night, the impassive, staring faces of the sapundu evoke a very different mood. 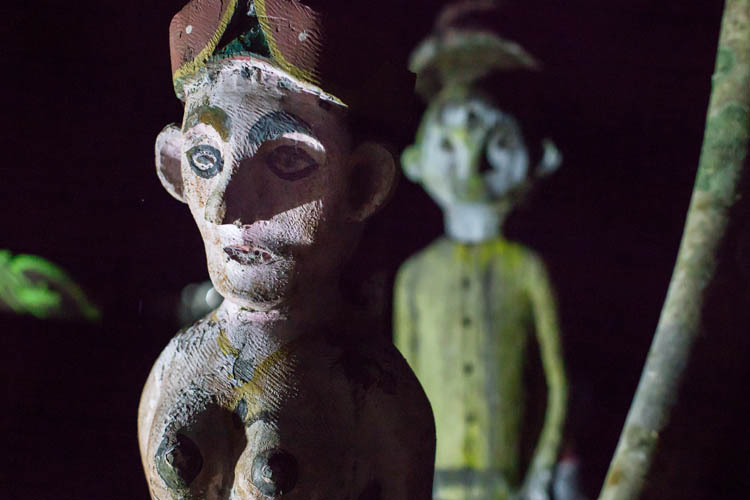 With little artificial lighting, a moonless night in a Kalimantan village can be quite dark indeed. Locate the sapundu in a forest clearing, add in some rumbling sounds of wet season thunder, and it’s not difficult to start imagining the presence of ancestral spirits and jin, roh and hantu (spirits and ghosts). 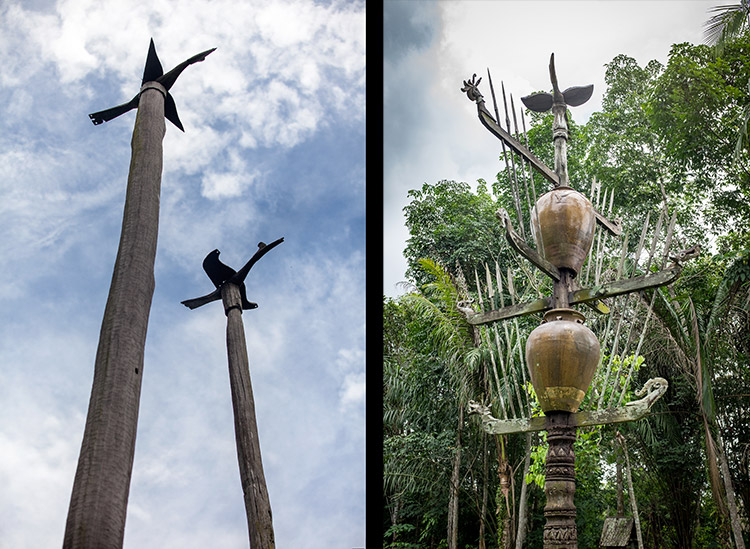 Sapundu aren’t the only, or indeed the tallest Kaharingan ceremonial pillars to be found in a Dayak village. The very tall poles in the above left picture are pantar panjang. They are rarely built nowadays, but old ones are still to be found, usually with hornbill birds figured on top. They commemorate the Tiwah of some important or highly renowned person.

Equally impressive, though slightly less lofty, are the pantar sanggaran, like the one on the above right. They incorporate one or more Chinese jars (balanga), and have cross-bars in the shape of dragons (naga), with four upwards-pointing spears on each side. The pole itself may have figures of people or animals carved into it. At one such pantar (sporting three balanga) we were told that each balanga jar signifies a head taken by the owner – but we cannot vouch for the truth of that… and anyway – that’s another story.