Posted on January 23, 2016 by John Boyd Macdonald| Leave a comment

Not long after we first arrived in Central Kalimantan, I wrote about a Kuda Lumping ‘performance’ in the village of Suka Mulya, just a kilometre or so from our home. Several months later, we were delighted to hear of another performance which was to be held in conjunction with a wedding ceremony, in the same village.

The Kuda Lumping (also known as Jatilan) is a Javanese tradition, and the people of Suka Mulya are predominantly trans-migrants from Java, mainly East Java, though many have been in Kalimantan for two or three generations. It will be interesting to see if the Kuda Lumping in Kalimantan diverges over time from the ‘original’ versions of Kuda Lumping  and Jatilan as performed in Java. Perhaps that is already happening… 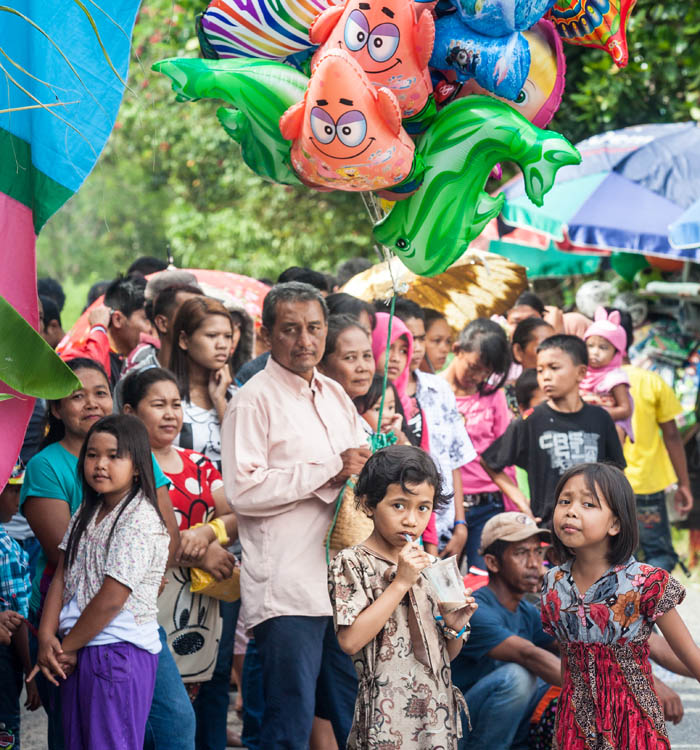 With the formal parts of the wedding ceremony completed, a crowd of several hundred people, of all ages, began to gather around the area which had been prepared for the Kuda Lumping performance. It was essentially just a cleared area of bare dirt. At one end small stage was erected for the musicians, and vendors of snack foods, sweet drinks and souvenirs set up business. Spongebob Squarepants or Hello Kitty balloons anybody? 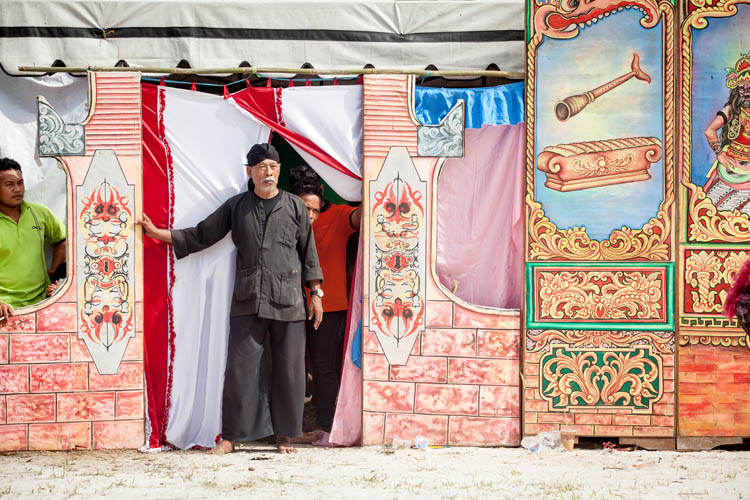 During the Kuda Lumping, a number of people – predominantly young men from the village – go into a trance state where they are possessed by the spirits of horses (kuda in Bahasa Indonesia). Its origins are obscure, and its precise meaning is unclear, but there is no doubting its popularity or the powerfully spooky impact that it has on all who witness it.

It begins quietly enough, with traditional music from the small orchestra consisting of drums, woodwinds and gamelan instruments. The activities of the trance dancers are presided over by several shaman, who ensure that none of the trance dancers are injured or fail to return to their normal state of consciousness. The senior shaman looks out from backstage, to confirm that all is ready to begin.

The first dancers to come out are teenage girls, each one astride a two dimensional toy horse. 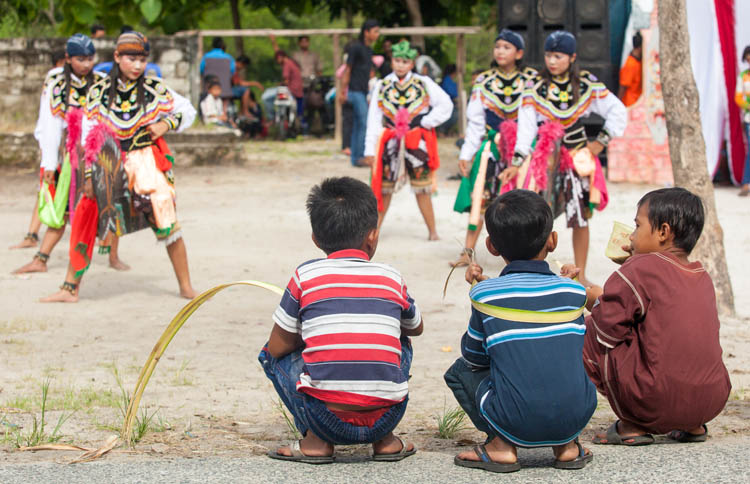 Their dancing is quite structured and formal. For a time, the performance has quite a graceful and elegant feel to it. 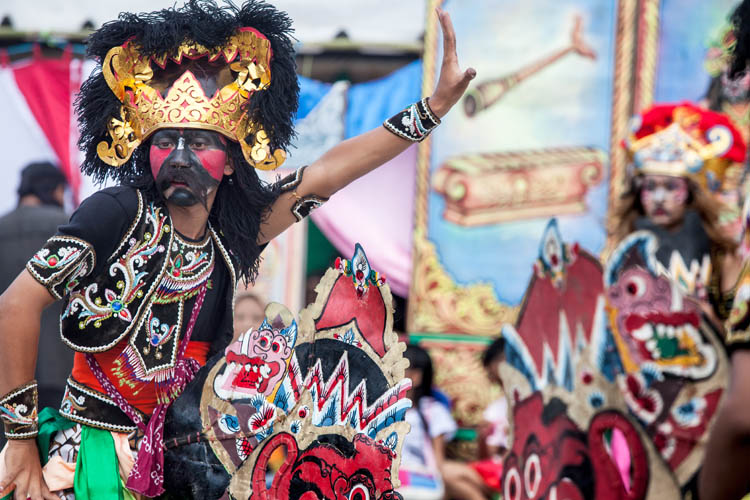 The girls are joined by a group of adult males, dressed as warriors, each one also riding on a toy horse. The music is gradually getting louder by the minute, especially after another character with a monstrous red head appears in their midst. 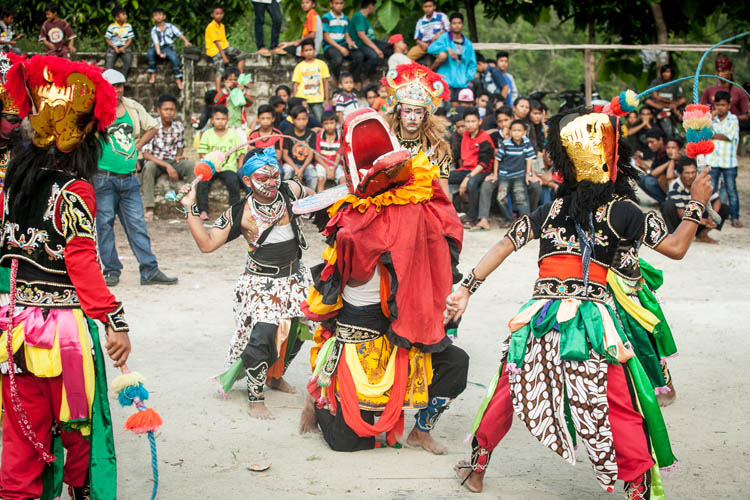 The warriors take up whips and flay the intruder mercilessly. 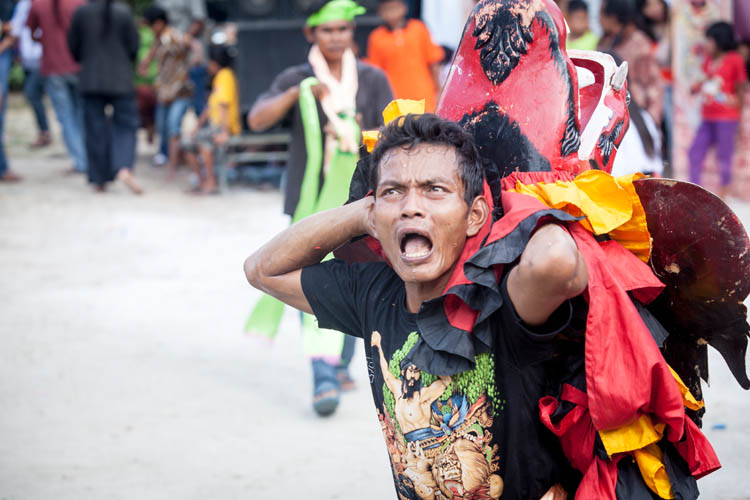 From this point on, the performers – along with a large number of people from the audience – go into a state of trance. For the next hour or so everything seems to spiral wildly out of control, with ever more people going into trance, prancing around like horses, eating grass and dirt, and appearing to be in a wild ecstatic state of consciousness. It’s mayhem. 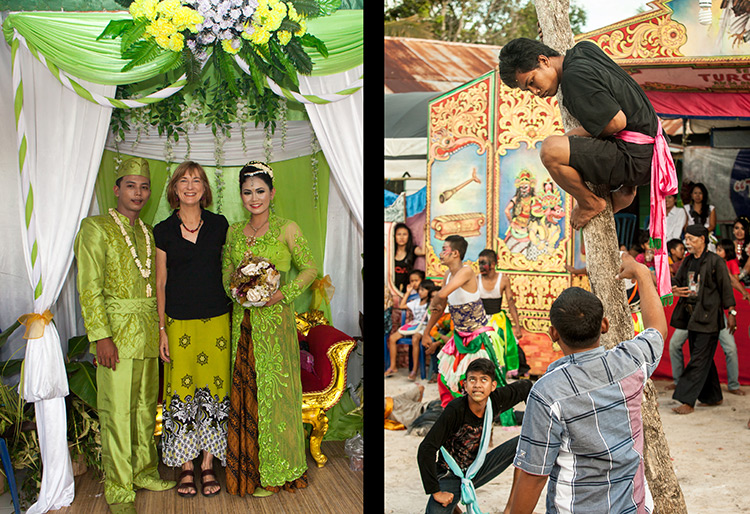 Meanwhile the bride and groom sit on thrones in the nuptial pavilion, looking smooth and refined, and greeting a line of well-wishers congratulating them on their marriage. But just outside the pavilion, guys are turning into monkeys and climbing up trees. 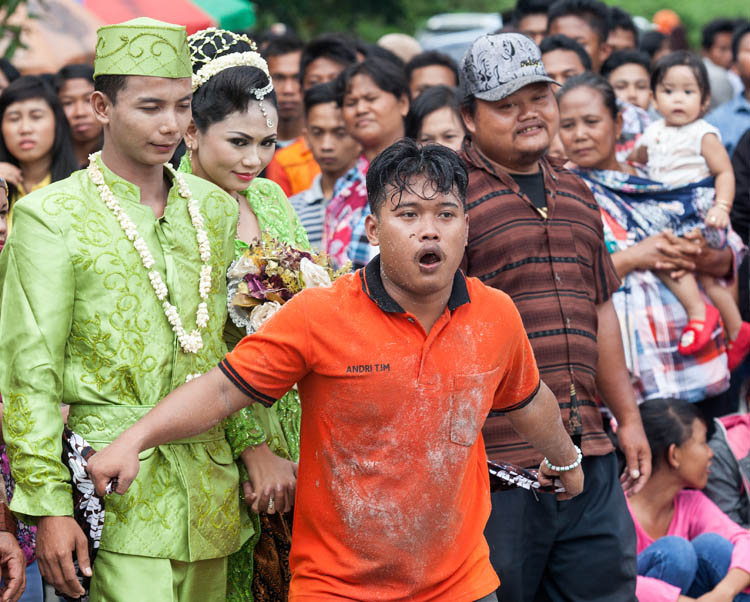 One of the trance dancers loops a batik cloth around the bride and groom, and leads them out into the open area where there are now perhaps 20 people in trance, doing crazy stuff. 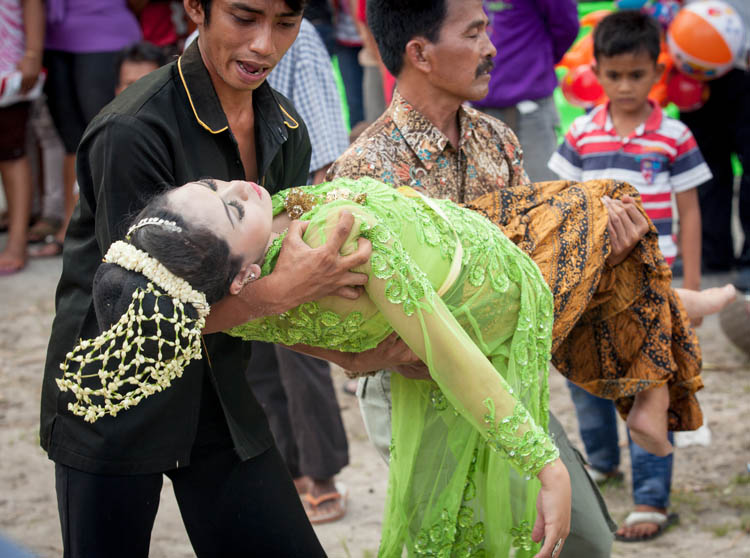 I didn’t see exactly what happened, but there was a commotion and the bride suddenly went limp and collapsed in a heap. Family members who were serving as attendants picked her up and carried her away from all the hubbub to a place of safety where she soon recovered. 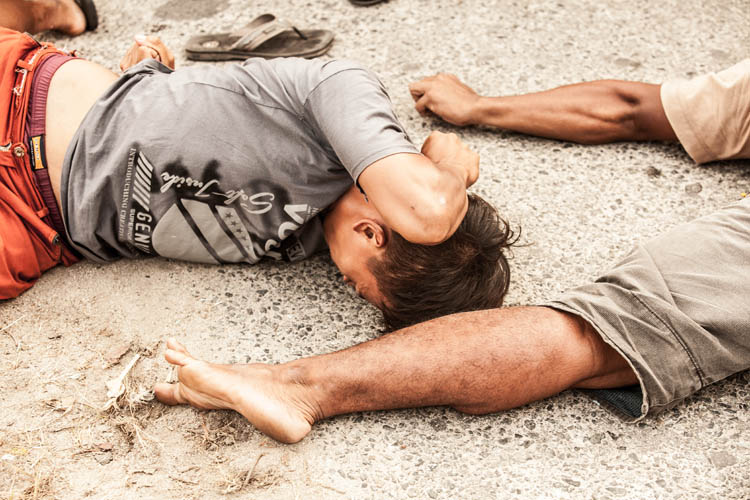 She wasn’t the only one to collapse. Some of the dancers also appeared to be overcome, and fell to the ground, frequently in strained and contorted positions. 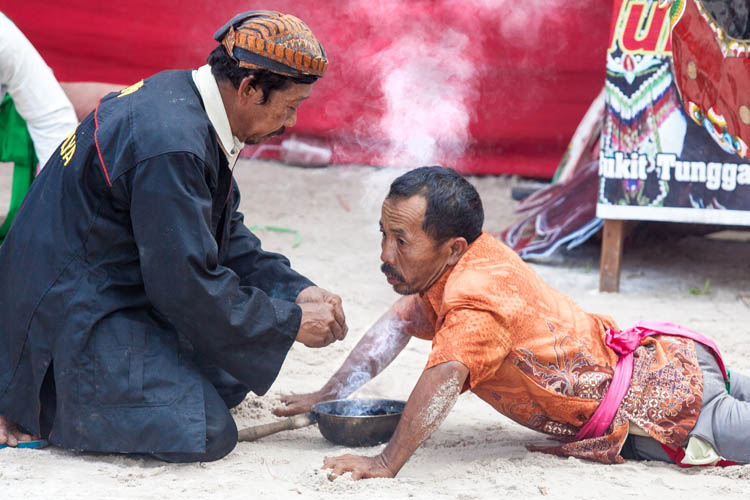 One guy managed to wriggle on his belly across to where one of the shaman had prepared a smoking pot of charcoal and herbs which seemed to revive him somewhat. 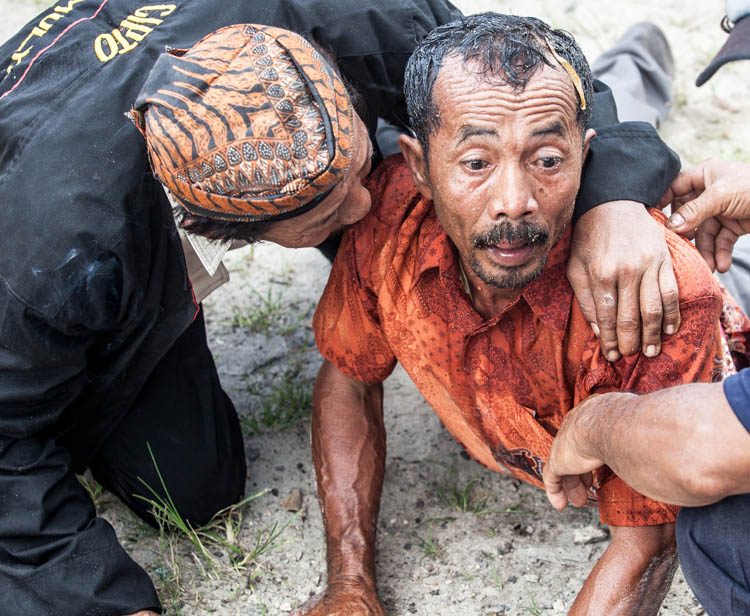 But he still looked like he didn’t know whether this was Borneo or Tuesday. 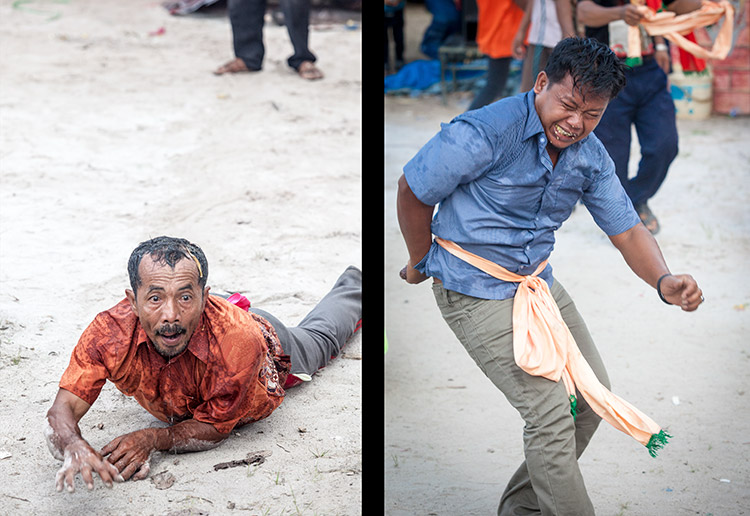 At no point did we see any of the dancers drop the mask of trance and revert to their normal selves. Although it is hard to believe that they had become possessed by the spirits of horses, there can be little doubt that they themselves felt that they had been transported to another realm, and taken on a quite altered state of consciousness. 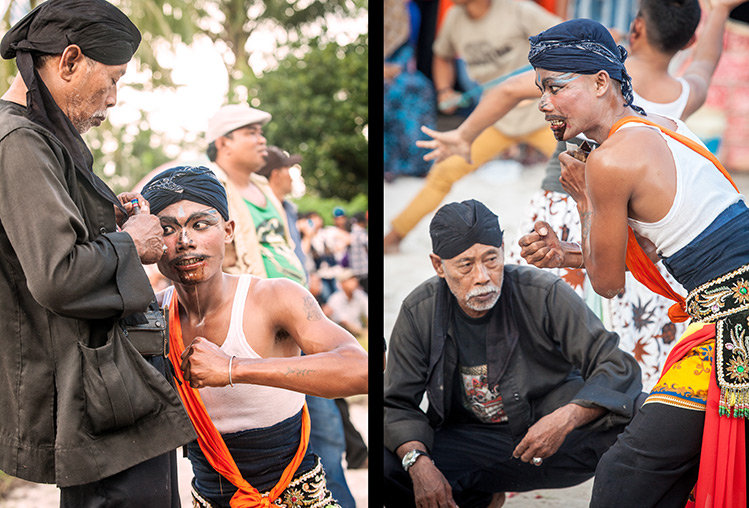 From time to time the shaman would get out a tiny bottle from his pocket, pull the cork from the top, and offer a sniff to one of the dancers. I didn’t find out what was in that little magic bottle, but whatever it was the dancers were pretty keen to get at it, and seemed to be energised afterwards.

Take these ones below, for example. 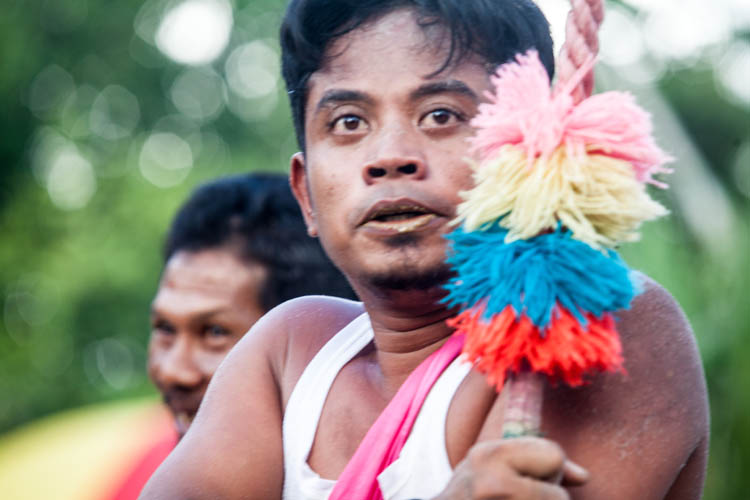 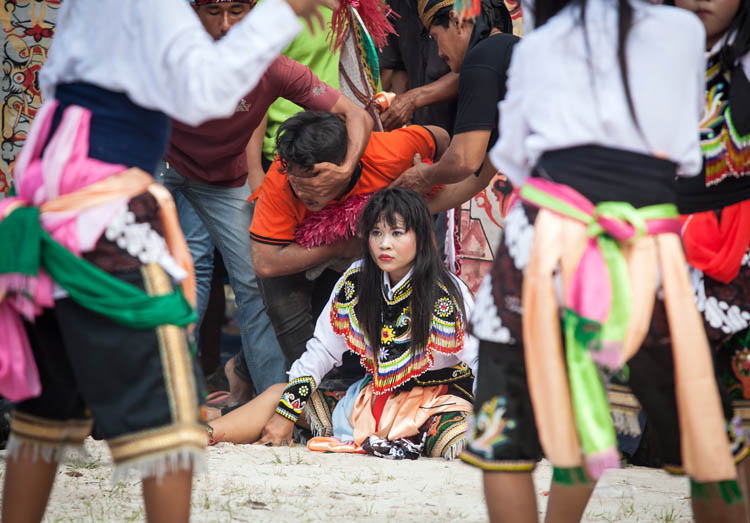 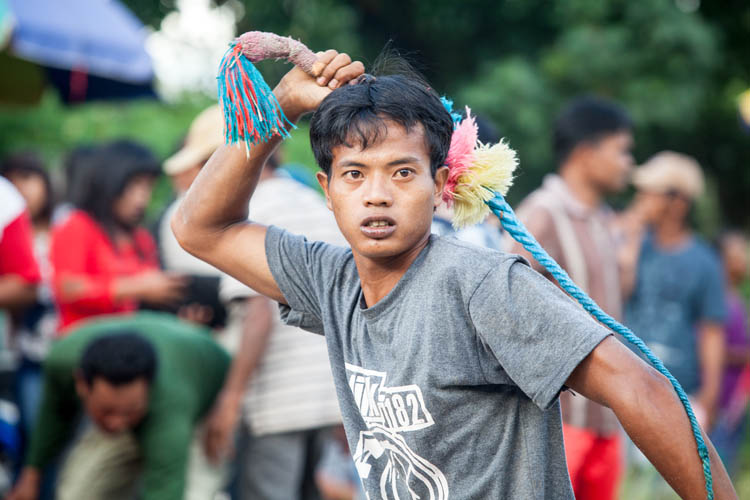 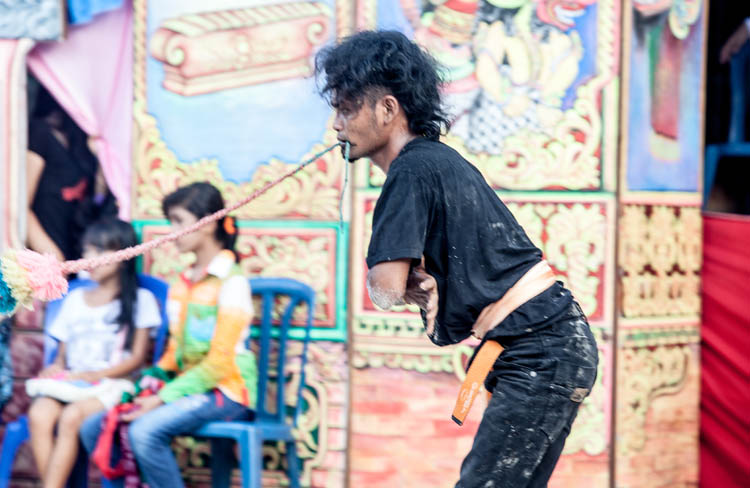 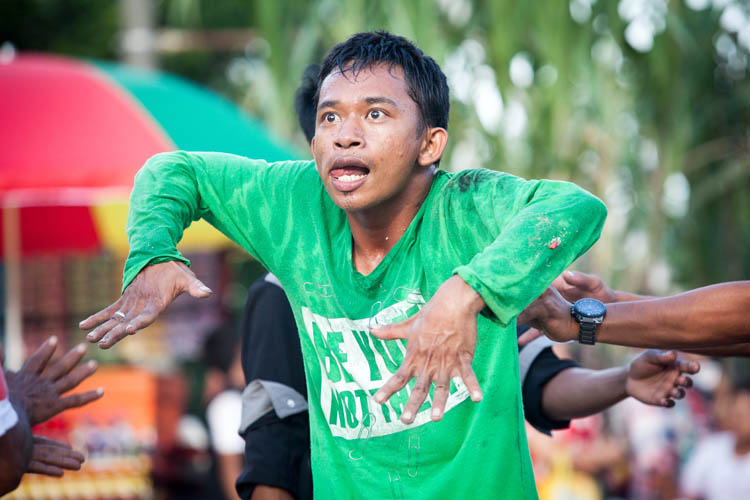 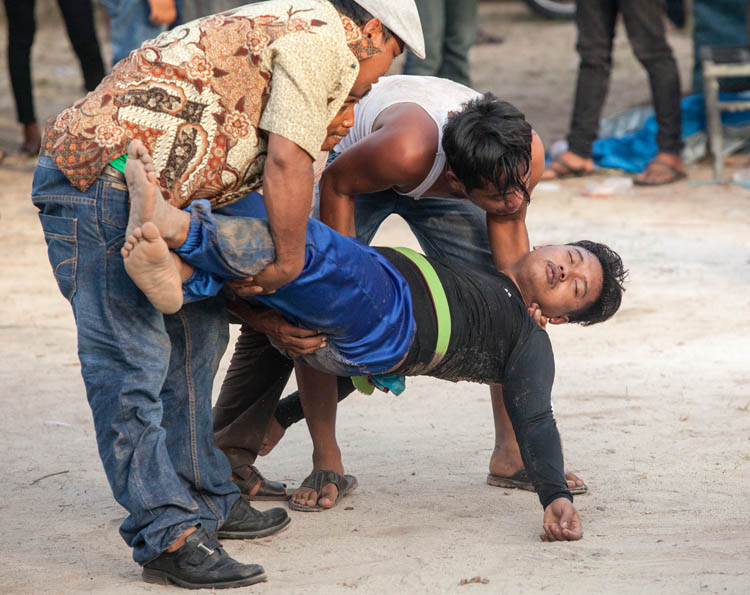 Eventually things started to wind down. One by one, each of the dancers would be selected by the shaman and their helpers, and brought back from the state of trance. Different techniques were used. Some would be whipped several times until they collapsed, others would get a gentle flick to the forehead after which they would fall backwards into the waiting arms of the helpers. 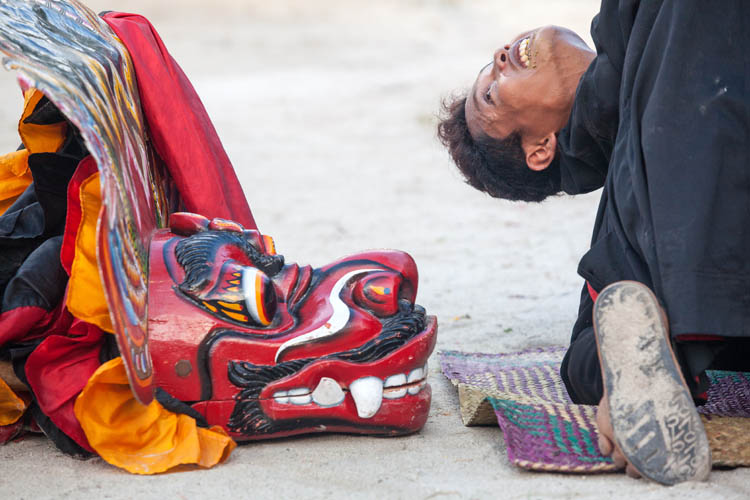 Each one appeared dazed and confused, and would spend some time looking around apparently trying to work out where they were and how they got there. Then they would be helped out backstage, where they would sit for a time drinking water and collecting themselves before returning to the audience. 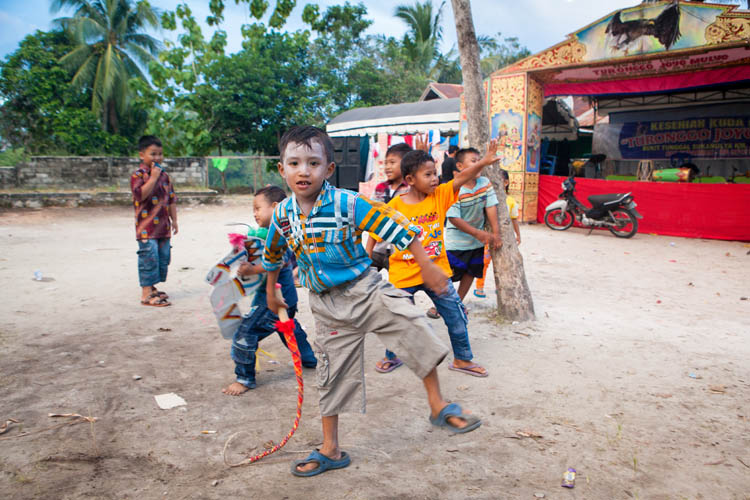 And finally, after all the adults had left to go home, and there was almost nobody left to witness it, the young boys would have their turn. Complete with mini whips and mini toy horses, they seemed every bit as enthusiastic as the adults. It would appear that the tradition of Kuda Lumping will survive and continue – at least for one more generation.

Posted on October 28, 2014 by John Boyd Macdonald| Leave a comment

One of the nice by-products of the after-school art classes at the YUM library, which are now co-hosted by Karen, is that she makes connections with families around the immediate area. So, at the Sunday produce market at Tangkiling this week, a little girl tugged at her sleeve and shyly said “Selamat Pagi, Ibu Karen” and then introduced us to her dad. 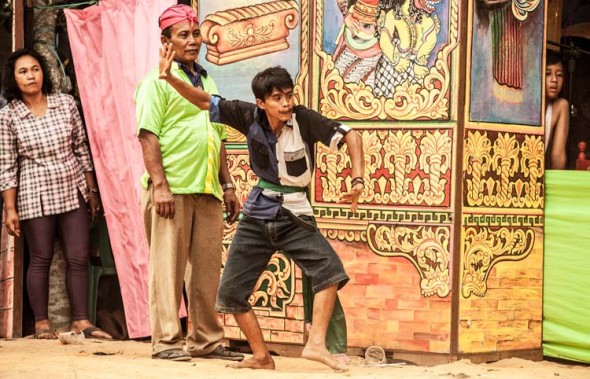 Another time, two girls from the (Javanese transmigrant) village of Suka Mulya invited her to come to the village “to see some dancing”. Not knowing what to expect, she turned up there at the appointed time (Tuesday at 2pm), to find that a large wedding celebration was in progress. A temporary stage had been set up in a grove between the houses, and a small gamelan orchestra had been installed. And the dance performance … well, it was a Kuda Lumping performance, and she phoned me at work to say: “get over here right away, it’s amazing!” 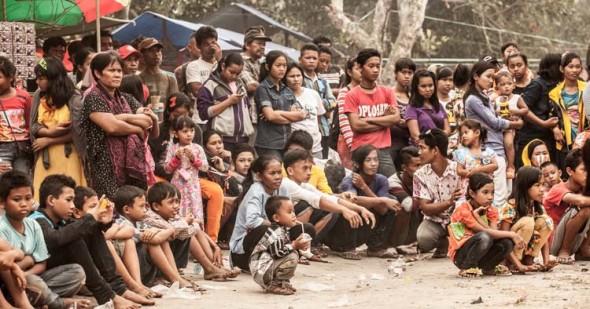 The Kuda Lumping originated in central and east Java, and is a very special thing indeed. Over a couple of hours, a number of young men and teenage boys go into a state of trance, and supposedly become possessed by the spirits of horses. They strut around, stamping the ground, rolling in the dirt, eating grass and chaff (and sometimes, we were told, they eat glass and walk over burning coals), seemingly oblivious to pain or the crowd around. The meaning and origin of the Kuda Lumping is unclear. It goes back at least several hundred years, with one theory being that it began with Mataram Empire cavalry battling against the Dutch – but it could be much older again… 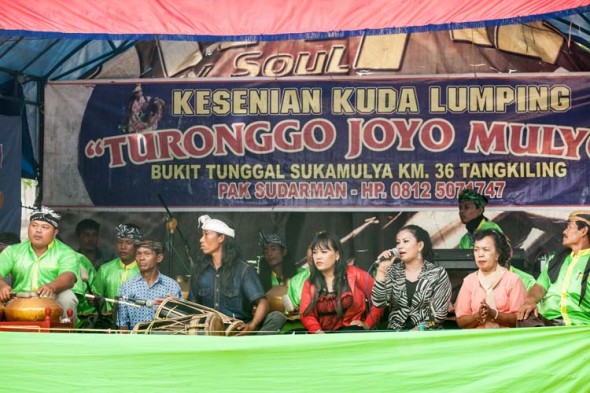 The gamelan plays fast, just a few gongs and several prominent drums, and with vocalists alternately singing, wailing and making syncopated screeching sounds. A woodwind instrument (I don’t know the name) plays over the top, sounding like a jazz improvisation on an oboe. It’s quite powerful and other-worldly, and actually sounds rather better and more melodic than you might imagine! 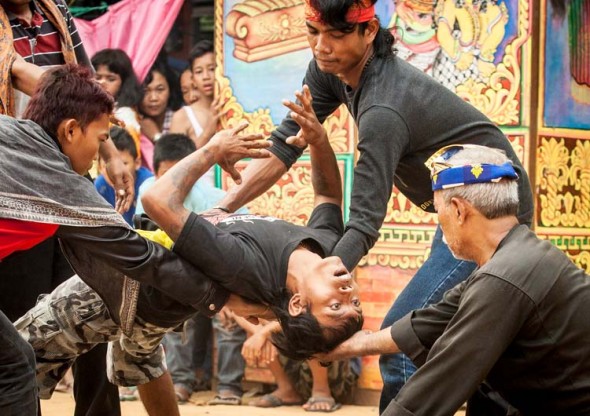 Overseeing the ‘trancers’ are a small number of very serious-faced older men (perhaps shamans) who ensure that the boys don’t hurt themselves as they trot and canter around. It’s a bit wild and chaotic at times, looking like it might spiral out of control, but the older guys keep a lid on it, and ensure that there aren’t too many in trance at any one time. These ‘minders’ have some kind of power over the horse-boys, and go through a dramatic and elaborate procedure to bring each of the boys out of trance.

This can involve tapping them on the forehead to make them pass out backwards into the arms of waiting support crew, wiping a cloth violently across the boy’s forehead, or … striking him three times around the abdomen with a whip. And they don’t appear to hold back with the whip arm, either! Once returned to normal consciousness from the trance, the boys look dazed and confused, with a what-am-I-doing-here expression on their faces, and they are ushered off backstage to ‘recover’. 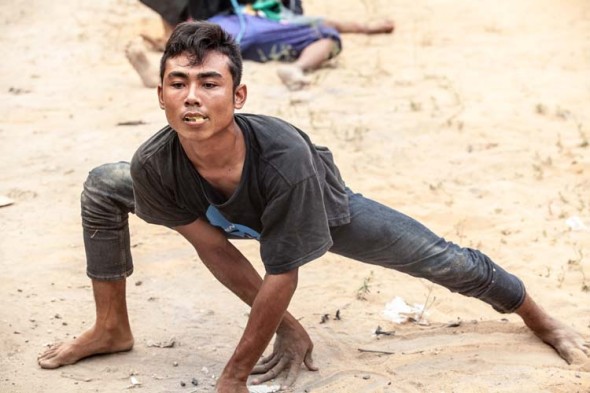 We had seen a Kuda Lumping performance once before, in 2009 near the Prambanan temple outside of Jogjakarta. On both occasions we were the only non-Indonesians present, and the structure of it was much the same. On both occasions the trances looked half-real, half-contrived. We did see that some of the trancers were sitting backstage in a very spaced-out state for some time after they came offstage. Perhaps they were just exhausted from all that horsing around. 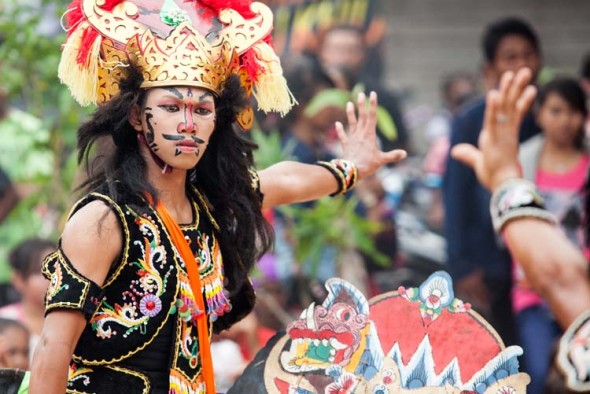 One difference on this occasion was that the bride and groom got involved at one point, with one of the trancers carrying first the groom, then the bride, through the crowd and into the wedding pavilion and onto a little throne set up for them there. They each tried to look dignified as their ‘horse’ swerved and reared up on the way. 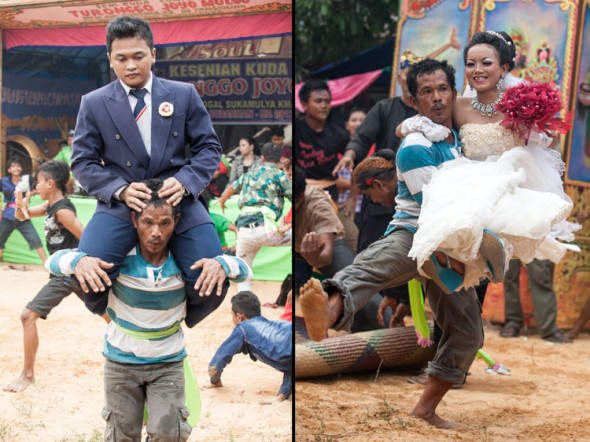 We went over to congratulate the bride and groom, and to pay our respects to their parents, and of course (this being Indonesia, perhaps the most hospitable place on the planet) we ended up sharing in the wedding feast and refreshments (i.e. buffet meal, cakes and coconut water). 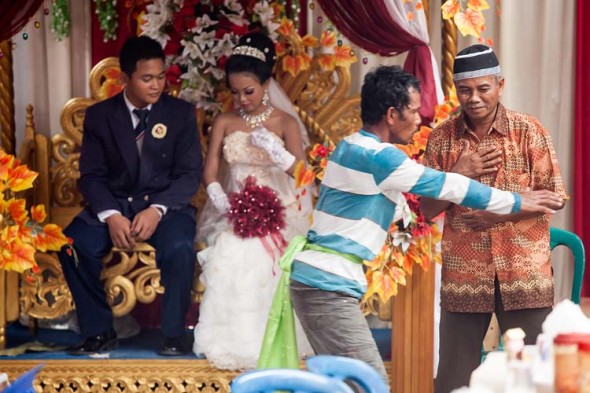