Around this time last year I wrote about the seasonal smoke haze that blights large parts of Southeast Asia each dry season. But last year looks mild in retrospect, as 2015 is shaping up to be the worst year on record. And without doubt the worst place for the worst smoke in this worst year is … our ‘home town’ of Palangkaraya, the capital of Central Kalimantan province.

This is no idle claim. The World Air Quality Index monitors atmospheric conditions in over 8000 cities and towns around the globe. It compares them based on the number of micrograms of fine particulate matter (less than 10 microns) per cubic meter of air. For the past two months, Palangkaraya has had the world’s dirtiest air – by a wide margin. When I checked a couple of days ago, for example, the worst places I could find were New Delhi on 350, and Izmir on 500. Most cities (including Beijing on 85, New York on 10, and Sydney at 15) were well below those levels. Anything below 50 is regarded as ‘Good’.

But the level in Palangkaraya showed up as ‘999’ – and that’s only because the system wasn’t built to show numbers of 1000 or greater. The actual figure for Palangkaraya that day was 3334. That’s ten times the level classified as ‘Hazardous’. It’s enough to take your breath away.

When we found the conditions had become intolerable in late September, we evacuated to Java to enjoy the (comparatively) fresh air of Jakarta. We got ‘homesick’ and so returned here about 10 days ago. However the 2015 Kalimantan haze emergency has worsened, and may still have a little way to run… But we are in good spirits and relatively good health. 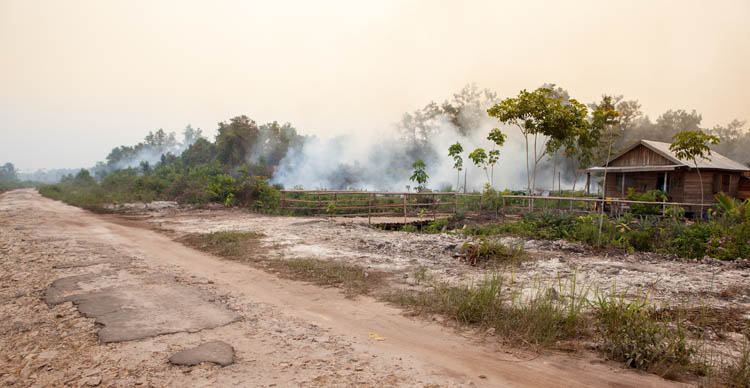 The smoke occurs due to (mostly illegal) fires in several provinces on the Indonesian islands of Sumatra and Kalimantan. Fire provides an easy means of clearing vegetation from land which can then be used for plantation agriculture, particularly oil palms. They are set in primary and secondary forests, but the biggest and most problematic location is in the areas of peatland, dried remnants of the former peat swamp forests which have been largely cleared and drained by canals. Once established, peat fires are almost impossible to extinguish, as these fires can continue to smoulder deep underground for weeks. Smoke rises eerily from the bare earth. 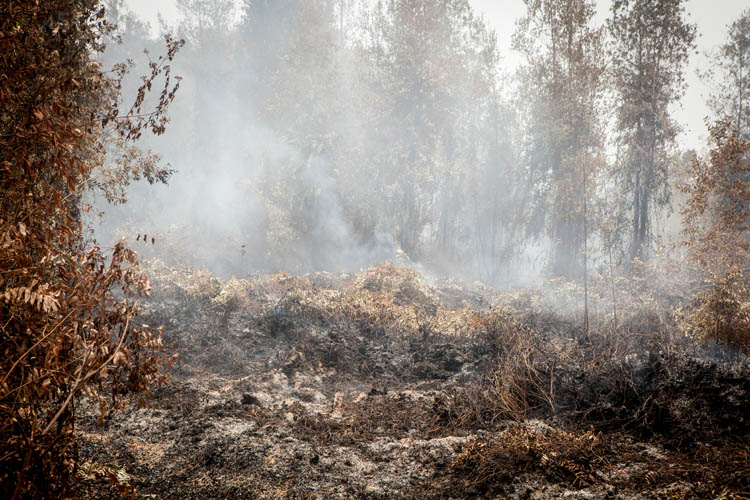 The peat can be many metres deep, and consists almost entirely of carbon-rich organic matter. It is one of the largest carbon storage deposits in the world. Its destruction constitutes an environmental catastrophe as well as a health and humanitarian crisis, because the burning of peat releases not only carbon dioxide, but large quantities of methane, carbon monoxide and other toxic compounds to the atmosphere.

The 180 degree panorama above shows an area south or Palangkaraya that was once a peat swamp forest, now entirely deforested and drained by those canals. The peat, which has been saturated for hundreds or thousands of years, becomes bone dry, and highly flammable. 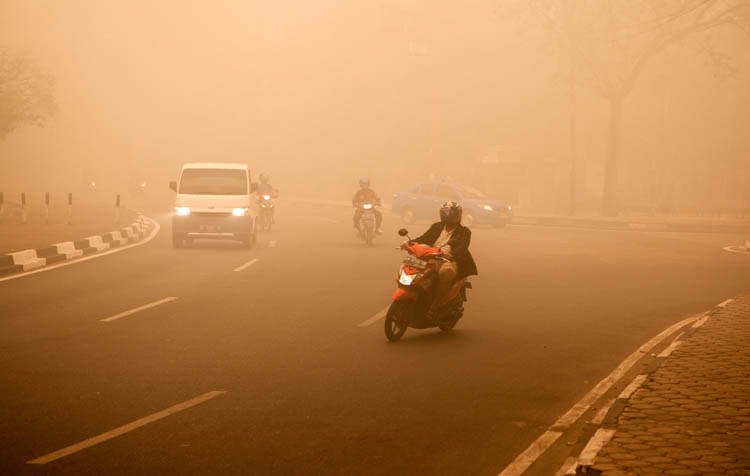 According to NASA, the 2015 fire season is likely to be the most damaging on record, surpassing even the impact of the catastrophic 1997 fires. There are several reasons for this. Firstly, there has been little or no rain for the past six months, lowering the water table and causing the vegetation to become tinderbox-dry. Secondly, this year is subject to a particularly strong El Niño event, delaying the arrival of the wet season, and reducing the total rainfall which may be expected. Thirdly, and most significantly, there is more human pressure on the landscape, as the total population has steadily increased, primary forests are destroyed, and an ever-increasing proportion of the land is allocated to concession-holders for commercial development. 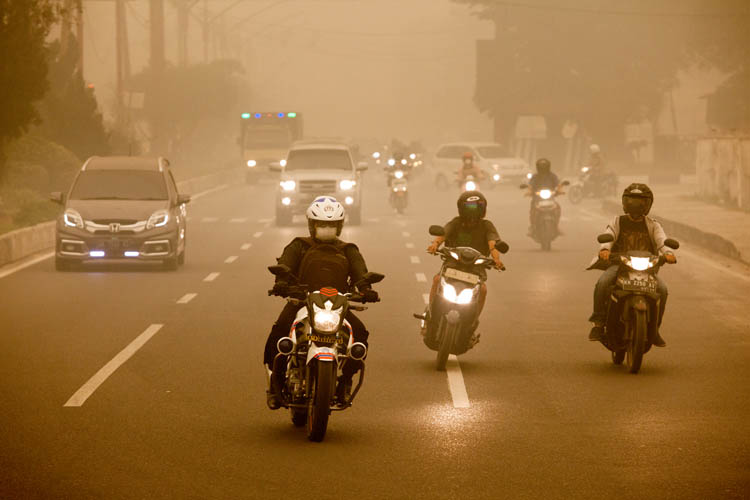 Authorities have been slow to recognise the severity of the situation or to respond proportionately, but remediation efforts are now under way. Thousands of members of the armed forces have been mobilised, water-bombing planes and other assistance has been provided by Malaysia, Singapore, Russia, and Australia. The Indonesian Government has called an immediate moratorium on peatland development, and has sent naval vessels to provide for mass evacuations,  particularly of babies and small children with health problems due to smoke inhalation. 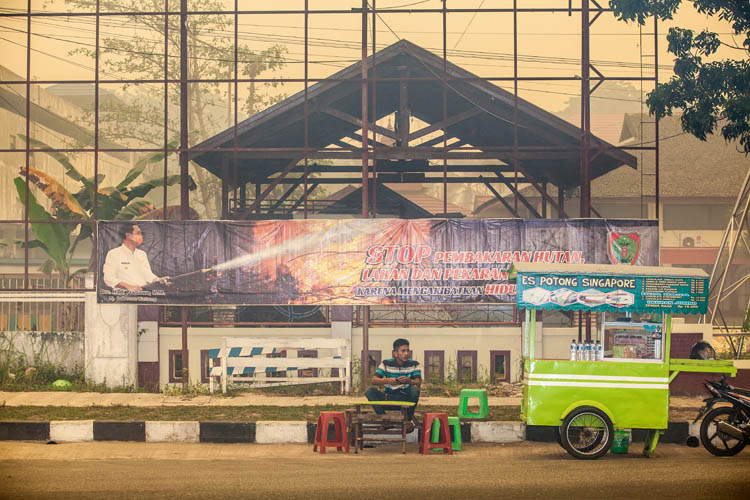 There are billboards and signs around the district aimed at discouraging people from starting more fires, which is good – but in itself it’s not much of a deterrent. This one says: “Stop pembakaran hutan, lahan dan pekarangan karena menakibatkan hidup kita sengsara!” – “Stop burning forests, fields and yards because it makes our lives miserable!” 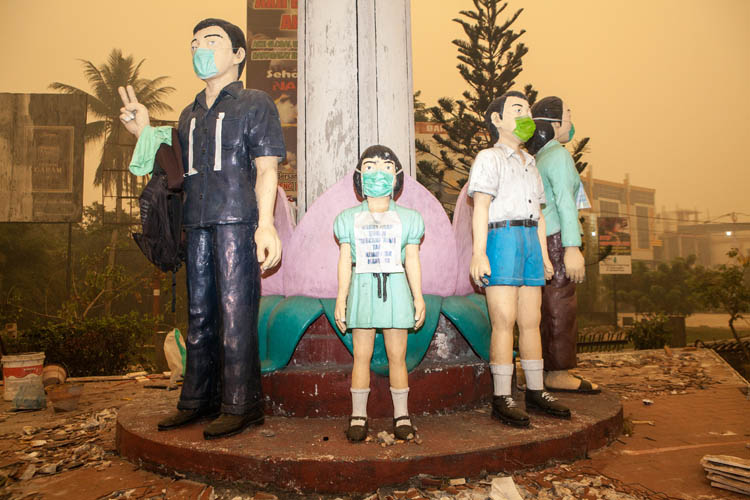 But the scale of the disaster exceeds the capacity to respond, and emergency services are being stretched and overwhelmed. There is some (rather understandable!) anger about the situation, and there have been a couple of smallish protests, though remarkably few considering that this catastrophe could have been prevented.  But now even the head of the Indonesian Bureau of Meteorology, Climatology and Geophysics (BMKG) has publicly described the crisis as “a crime against humanity of extraordinary proportions”.

The statues in the picture above of a happy family, which adorn one of the intersections in downtown Palangkaraya, have been fitted out with face masks. The sign that the girl is wearing says: “Kabut asap bukan bencana alam tapi kejahatan manusia” – “The smog is not a natural disaster, but due to human wickedness”. 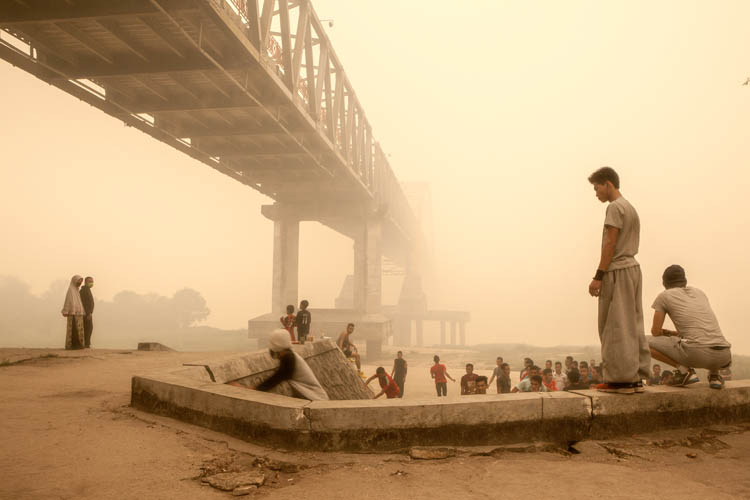 It isn’t surprising that long-term smoke inhalation is having profound impacts on the health of all people living in the affected areas. Few homes are sealed against the smoke outside, and effective protective masks are not widely available or used.

It is estimated that nearly 500,000 people have contracted upper respiratory tract infections (ISPA), including over 52,000 in Central Kalimantan. Most at risk are people with pre-existing medical conditions (particularly asthmatics), the elderly, babies and infants. A number of deaths have already been attributed to the smoke, but it is difficult to establish precise numbers of proven fatalities. 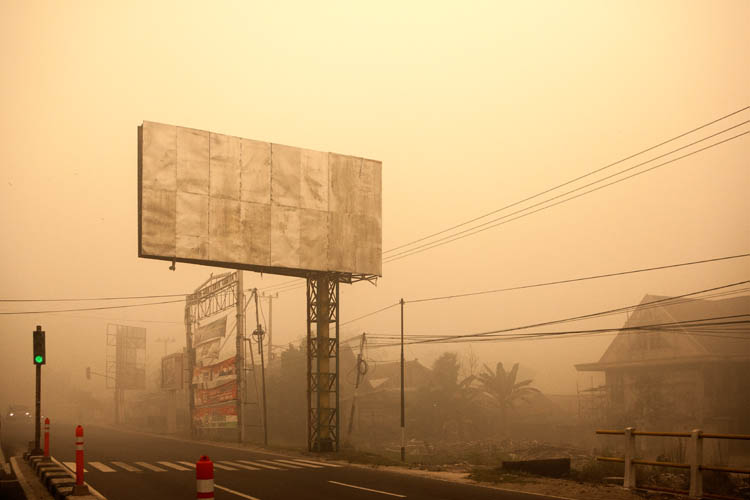 One major and insidious issue is diminished oxygen uptake. Gases in the smoke, particularly carbon monoxide, bond far more readily with haemoglobin in the than oxygen does. The metabolic impact of chronic oxygen deficit can result in low energy levels and weakness, depression and mental distress.

The lifetime health effects of extended exposure to the smoke are uncertain, in part because the exact composition of the complex chemical emissions from peat fires is still not well understood. However the smoke is known to contain a number of toxic compounds, and there is likely to be an upsurge in incidence of chronic cardio-pulmonary disease and cancers in years to come. 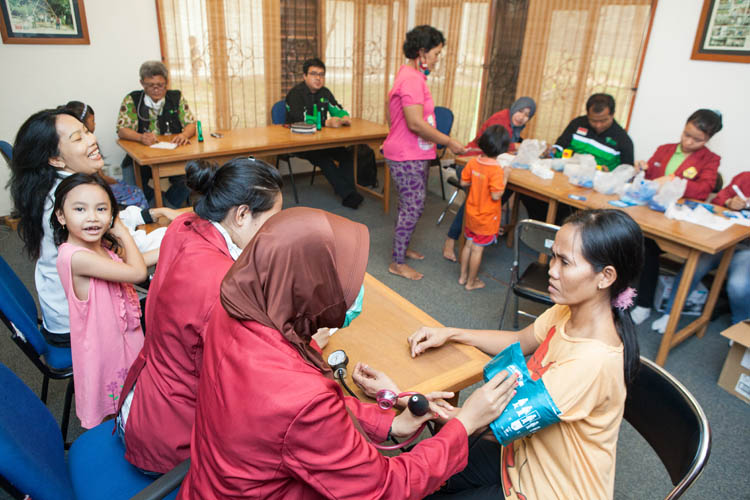 My host organisation (YUM) is actively involved in delivering emergency assistance to those affected by the Kalimantan smoke haze emergency in the Bukit Batu district. There has been a large-scale distribution of N95 masks to participants in YUM’s agricultural and other projects. Copies of an information leaflet have been distributed in the community, and mobile medical clinics have been held, in conjunction with the NGO Dompet Dhuafa, the University of Palangkaraya and the Politeknik Kementerian Kesehatan (POLTEKKES) Palangka Raya. 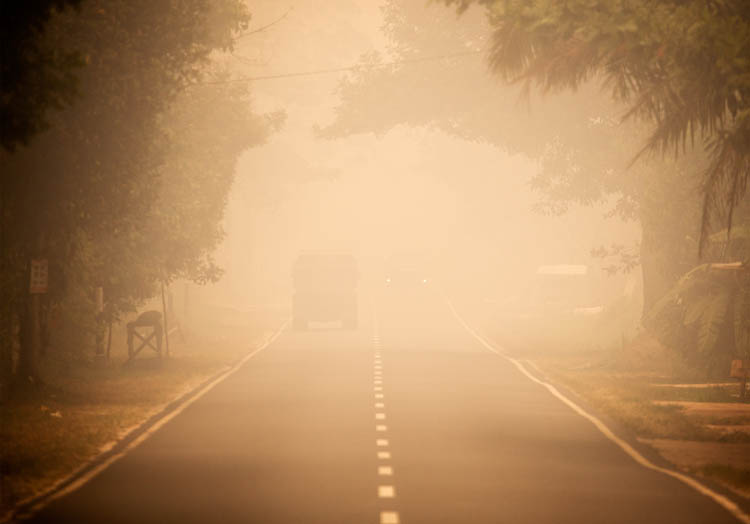 YUM (whose office is just on the right of the photo above) is looking for funds to build on and expand its existing response to the crisis. The primary objective is to deliver basic first-line assistance to remediate some of the most urgent and critical needs resulting from the Kalimantan smoke haze emergency. This will include distribution of thousands of N95 face-masks, medicines, oxygen supplies and much-needed information to the 13,000-strong community of Bukit Batu. A mobile medical team will continue to provide diagnostic services and first line treatment for the thousands who are suffering from respiratory ailments, and ‘safe rooms’ will be established to provide a clean air environment for people to recover from respiratory distress.

If you’d like to contribute to this project, visit the YUM website at www.yumindonesia.org/donate/, and specify “Haze emergency” on your donation.