If I was trying to think of things that I would LEAST like to find in my bed, a two metre long Mangrove Snake (Boiga dendrophila, also known as the Gold-ringed cat snake) would be high on the list*.

They are a bit temperamental, being variously described as ‘nervous’, ‘notoriously aggressive’, and inclined to ’strike repeatedly’. As a result, they make poor bed companions. Fortunately, it seems that they are only ‘mildly venomous’, though one website says (less reassuringly) that ‘there are no substantiated reports of human fatalities’. 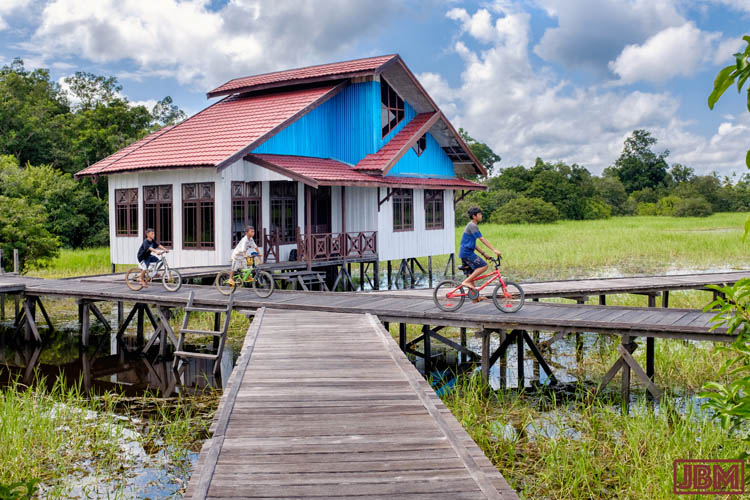 So, you’ve probably gathered that the snake-in-the-bed thing is not a hypothetical situation. On Saturday night we (Karen, our dear friend Gaye and I) were staying in a ‘guesthouse’ near the village of Jahanjang on the Katingan River, about four hours from here by car and ces (longboat). It’s a little out of the way, and only has guests stay there about once a month. The guesthouse stands on stilts in a little lake called Danau Bulat, 10 minutes walk from the village proper. 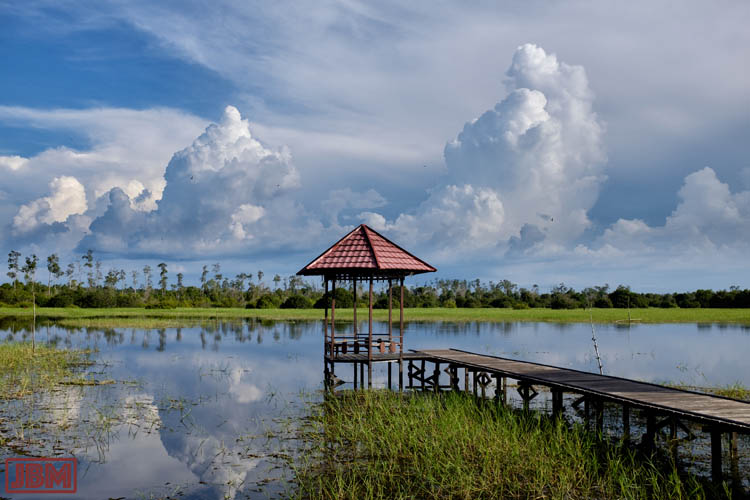 The lake was stunningly beautiful throughout the day, changing moods and colours every time the light changed. From the boardwalk we sighted proboscis monkeys, macaques, big fruit bats and a variety of water birds. 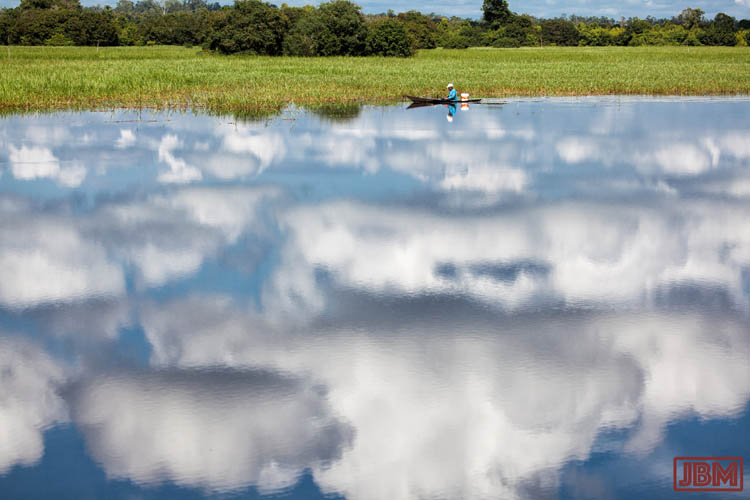 People passed by rowing their little jukung canoes, on the way to work, for fishing, or to collect the grass which grows in the lake for cattle feed. Sometimes it looked like they were traversing the sky. 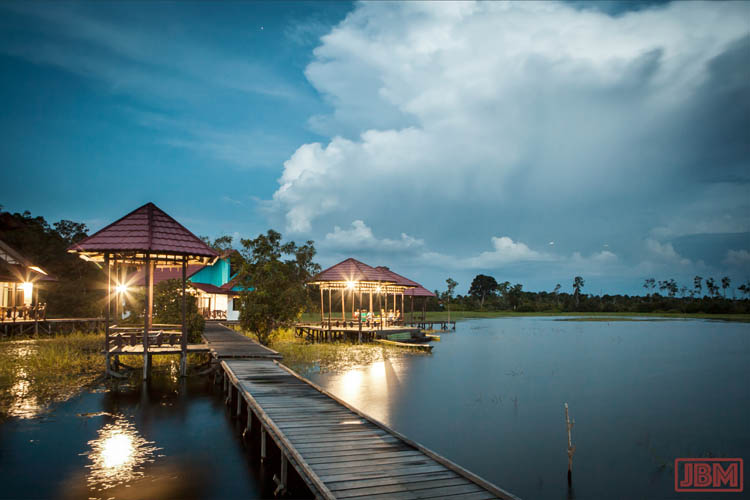 It was also pretty nice in the evening light. 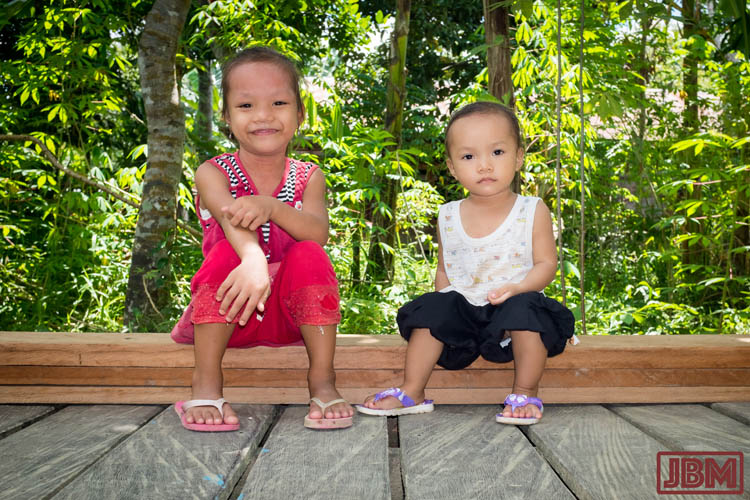 Jahanjang village was (as always) very friendly, and as always was home to many unspeakably cute children – such as Nesia (aged 5) and Maulida (2) above. 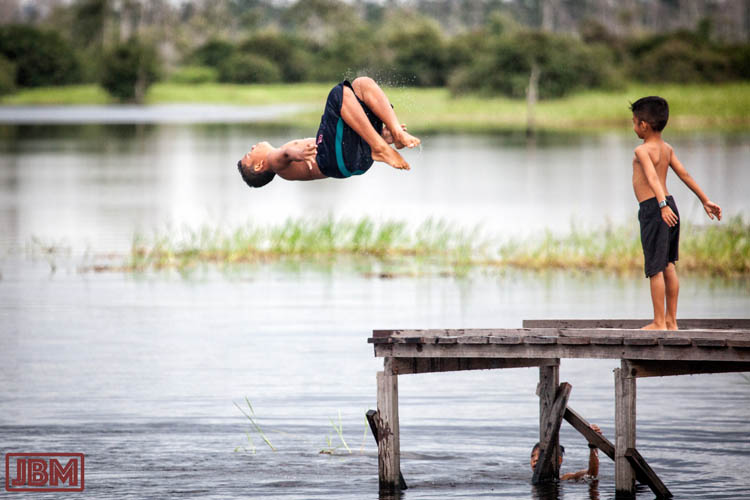 And boys learning to fly. 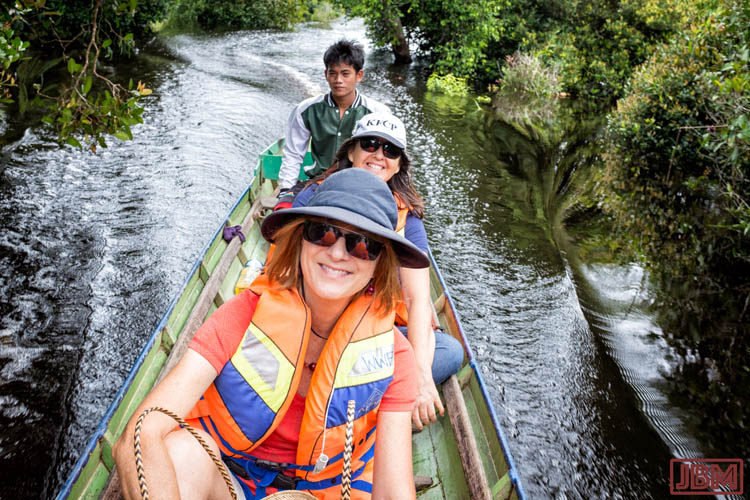 Across the Katingan River from Jahanjang is the western edge of the enormous Sebangau National Park. We made a day trip by a motorised ces canoe up a narrow river to Panggu Alas lake, and the nearby WWF station.

Sebangau National Park, although degraded in parts from past canal construction and logging is still the largest area of peat swamp forest left in Borneo, and home to big populations of wild orangutans, sun bears, proboscis monkeys, and innumerable other lifeforms, including… snakes. 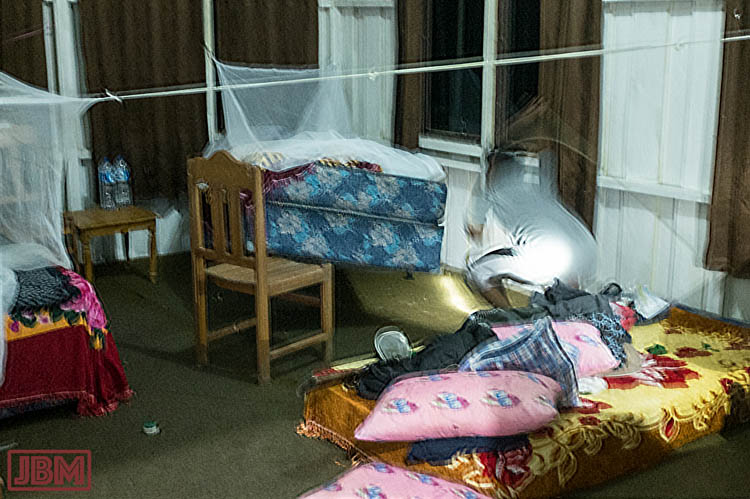 Aah yes, snakes. As I was preparing to go to bed in Saturday night (our third and final night in the guesthouse) I reached down to pick up my clothes bag from the floor, and couldn’t help but notice that a large black snake with bright yellow rings was coiling himself up behind the bag. He slithered away under my bed, and I slithered away backwards as quickly as I could towards the bedroom door.

While I waited and monitored the snake’s movements, Karen and Gaye went up to the village (along a narrow dark elevated boardwalk through the swamp forest) to seek assistance. About 25 minutes later they arrived back, along with the guesthouse caretaker (Pak Adinan), Bambang, Pak Sarwedi and three others, armed with some stout sticks and an air rifle.

At first they thought that the snake had departed, then we realised that it had actually wriggled up inside the bottom half of my bed. The bed was propped up on a chair, two shots were fired into it, and as the (no doubt outraged) snake emerged to complain, the appropriately named Bambang whacked it repeatedly with a stick. 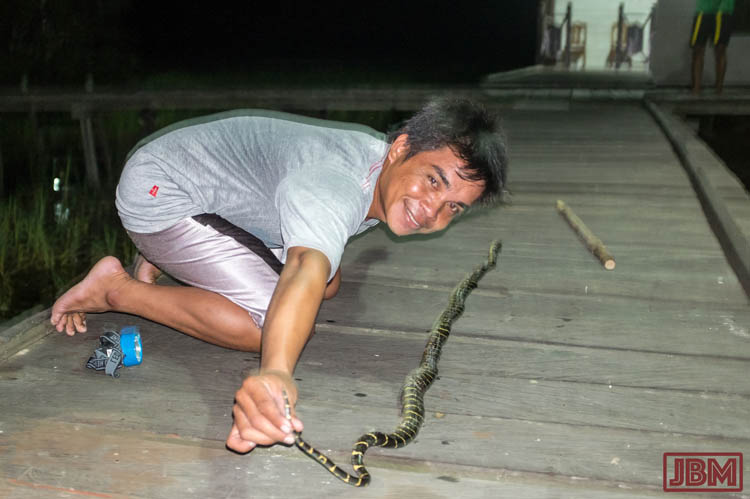 Bambang carried the poor limp thing outside and laid it out on the boardwalk. 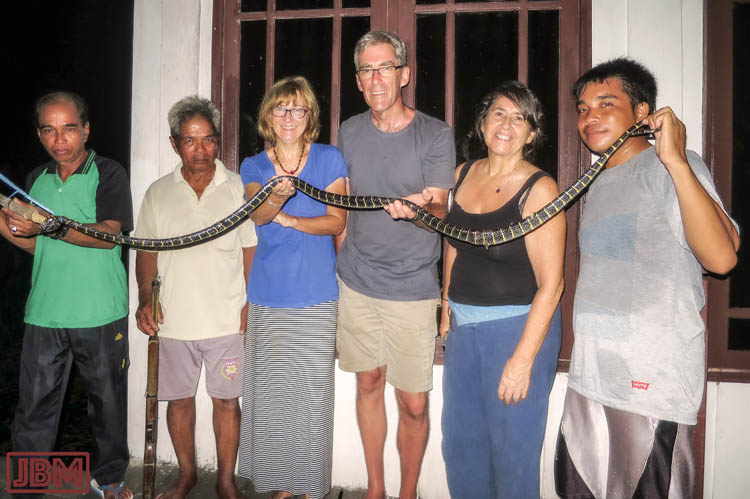 It obligingly posed for some group photos (that’s Pak Adinan on the left, and Bambang on the right), before our rescuers all left (taking the snake with them) to their homes in Jahanjang village. Karen, Gaye and I fortified our shaky nerves with a cup of tea, and resumed our delayed preparations for bed and sleep. All’s well that ends well.

So… what’s worse than finding one large and aggressive (if only mildly venomous) snake in your bed? Well, finding two of them of course! As I reached across to open the mosquito net over my (only recently remade) bed, I couldn’t help but notice another snake, basically identical to one recently evicted, on the floor at the head of my bed. Black with yellow rings, about two metres long, it was a depressingly familiar sight.

Upon this disappointing discovery, we unanimously agreed that the guesthouse had lost its appeal, so we hurriedly decamped to the village. It was now almost midnight, and we had to knock on a few doors before we located Pak Adinan’s home and woke him up. He and his charming wife Siti Masni took us in, gave us another fortifying cup of tea, and his daughter Wini kindly gave up her room for us to sleep in. Perhaps surprisingly, we all slept well, with no snake dreams…