Posted on February 12, 2017 by John Boyd Macdonald| Leave a comment

There are about 15,000 species of flowering plants on the island of Borneo, around 5,000 of which are endemic (i.e. they aren’t found anywhere else in the world).

And amongst that number are known to be at least 1,700 varieties of orchids (anggrek in Bahasa Indonesia) – with more still being discovered each year. 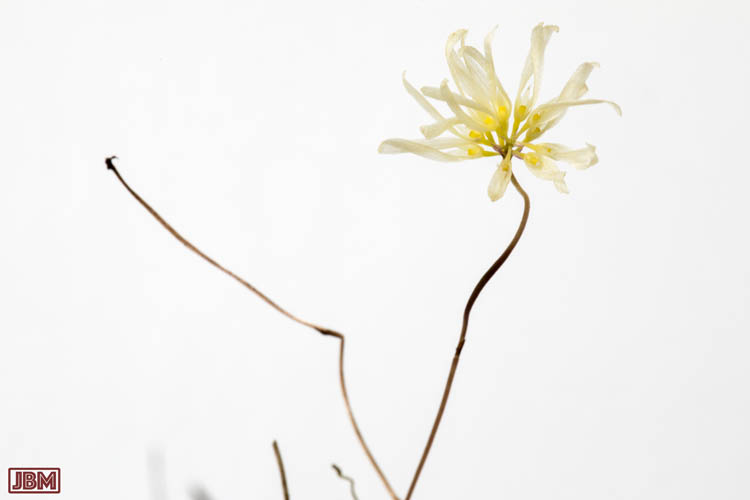 The Bulbophyllum purpurascens  (above) is one of them… The ‘Purple Bulbophyllum’ (so called because of the colour of its leaves) is found in forests from Myanmar to Java, and it likes to be in a location where the flowers can hang over water. Lovely. 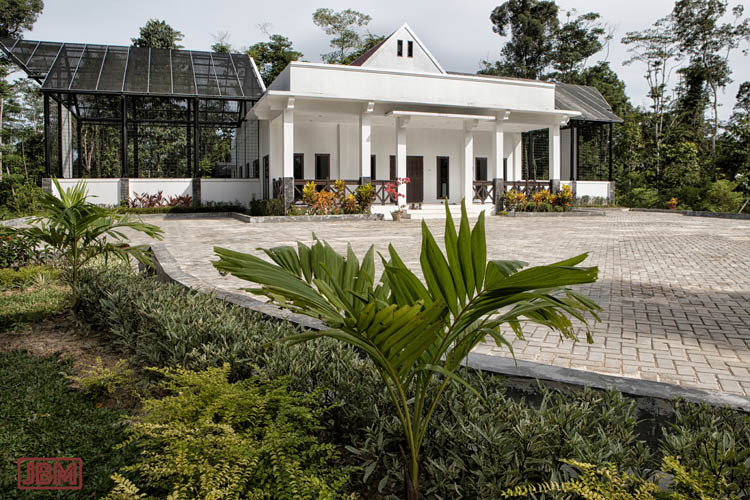 To my delight, I have found that the Kebun Raya Balikpapan (Balikpapan Botanical Gardens) – where I am doing volunteer work this year – houses a wonderful collection of orchids – in the newly constructed Rumah Anggrek (Orchid House). It’s so new that it’s not yet fitted out – or open to visitors.

There are different orchids blooming throughout the year, so every week there are new ones to see. And such variety – of colours, forms, and … ‘personalities’.

To my further delight, one of my tasks here is to compile a comprehensive photographic catalogue of every orchid as they flower during the year 2017. Talk about a labour of love… 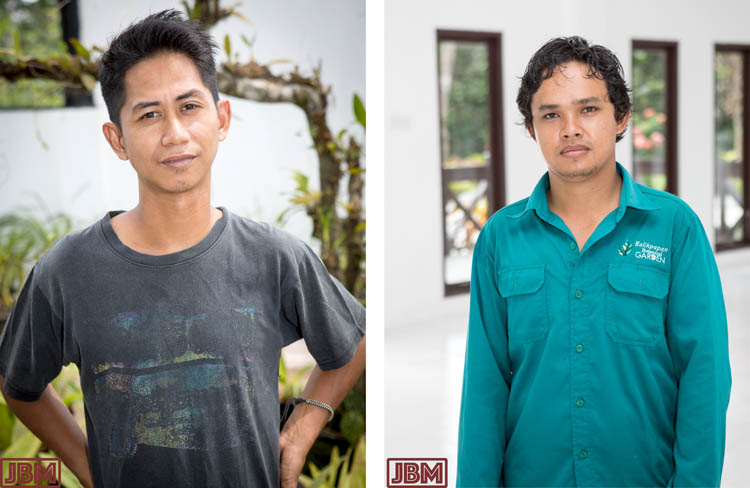 The collection (of nearly 500 species) is meticulously cared for by Micha (Micha Juwari) and Jupri (Jufrianto). Their detailed knowledge of the plants is very impressive, as is their obvious love for the (often fragile and fussy) orchids in their care. They found and collected many of the plants themselves in the course of various expeditions – to remote areas like the forests around Berau, as well as in the Sungai Wain Protected Forest which is immediately adjacent to the Kebun Raya.

So, here are just some of the highlights from my first five weeks… 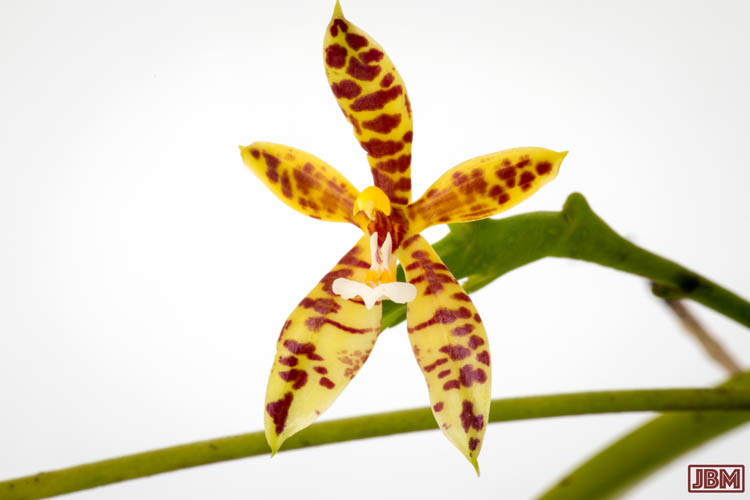 Phalaenopsis cornu-cervi (Breda) Blume & Rchb.f. The ‘Deer Antlered Phalaenopsis’. Like many orchids, it’s an ‘epiphyte’ – meaning that it grows on another host plant rather than in the ground, but only for support i.e. it’s not parasitic. It gets its nutrients from the air and dust, and its water from rain. It is a local plant, having been collected from the Sungai Wain Protected Forest just adjacent to the Kebun Raya.

This very striking flower is about four centimetres across. There are two other varieties – one has purely yellow petals, and one is entirely red. I’ve only seen them in photographs – but I think I prefer the contrast of having both colours together. 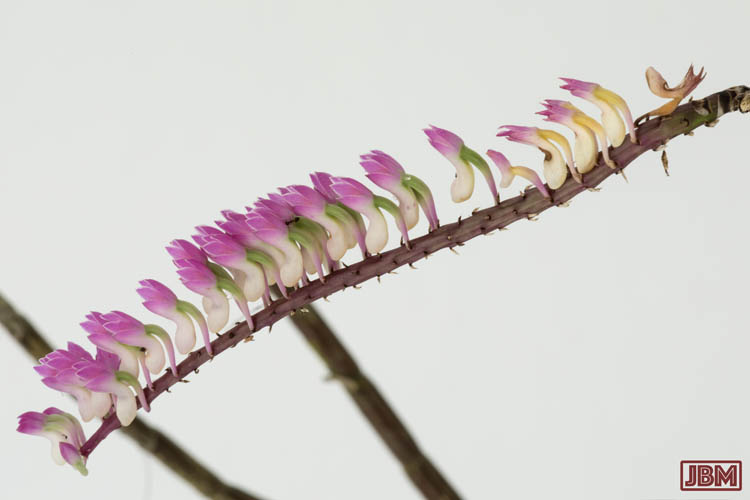 Dendrobium secundum (Blume). It’s also known as the ‘Toothbrush orchid’ because the shape of the flower head bears a passing resemblance to a toothbrush. However, toothpaste does not adhere well to the blooms, which are too large to fit comfortably inside one’s mouth, and the ‘brush’ is pretty much ruined after a single use. 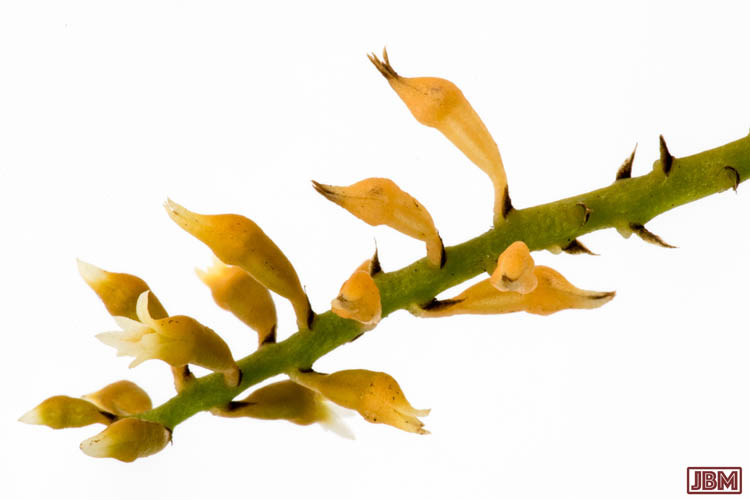 Thelasis carinata Blume. The ‘Keeled Thelasis’ is found from Myanmar right across Southeast Asia, through PNG and to the Solomon Islands. It’s even found in Far North Queensland, where it’s known as the ‘Triangular Fly Orchid’.

Like a large percentage of the wild orchids, the flowers of this species are quite small, the big ones only around 0.5 cm long. The macro lens makes them seem a lot bigger in the photo above. 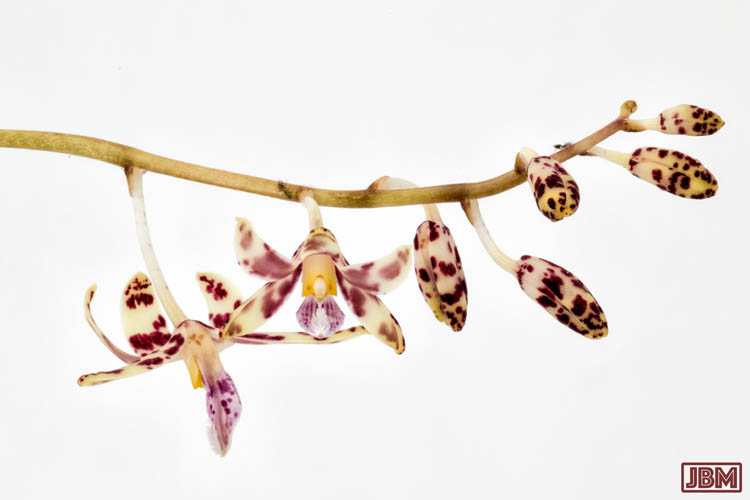 Dipodium paludosum (Griff.) Rchb.f. This gorgeous orchid is much larger than most, with each flower around 4cm across.

This one was collected from the Gunung Ketam protected forest, west of here, near the border between East and Central Kalimantan provinces. 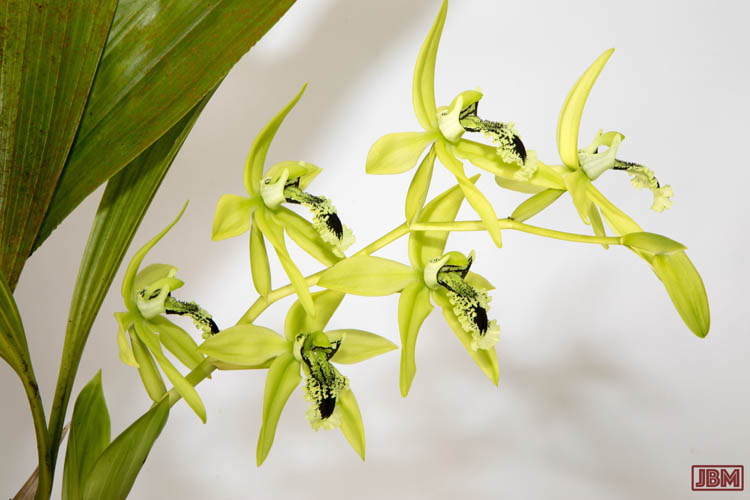 Coelogyne pandurata Lindl. This stunning and most unusual orchid is famous as the ‘Black Orchid’, although in truth it is mostly a striking hue of greeny yellow. The rich black patterns on the ‘lip’ of the flower are however quite dramatic. It grows locally in the Sungai Wain Protected Forest.

The large flowers have a surprising honey-sweet smell. They only last for a few days, but the plant can flower two (or more) times in one year.

There’s a bit of interesting history about Hugh Low, the European ‘discoverer’ of this orchid (in 1853) here. 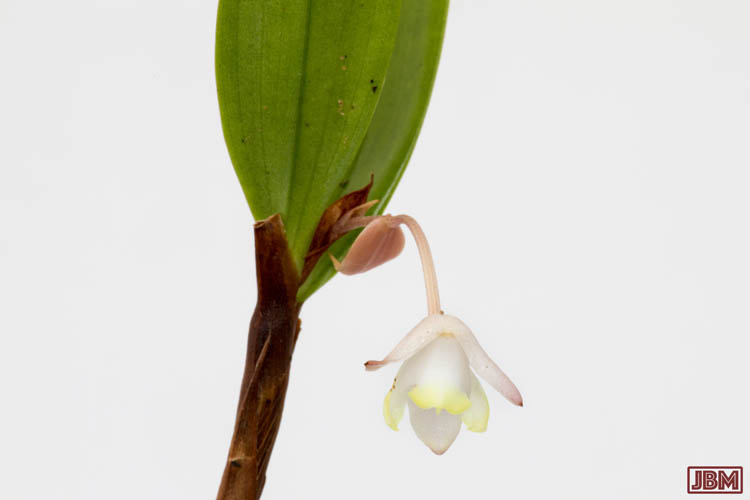 Eria nutans Lindl. – ‘The Nodding Eria’. This epiphyte is found in Malaysia, Thailand, Sumatra as well as in Borneo. I really liked its shy and gracefully pendulous, solitary little flower. Not at all showy, like some of the big prolific orchids – but quite lovely and delicate. 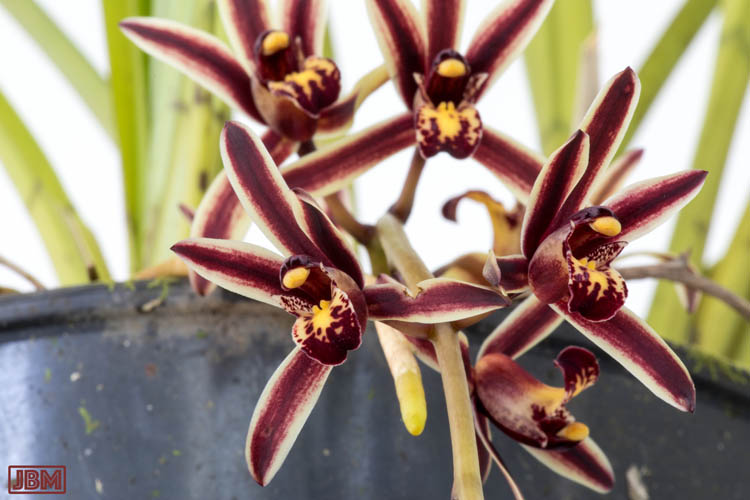 Cymbidium bicolor. This epiphyte is popular with collectors and home gardeners because, apart from being big (with 4 – 7cm blooms), prolific and splashy, it’s also quite hardy. The dangling flower stem can be up to 70cm long, and with as many as two dozen blooms on it. 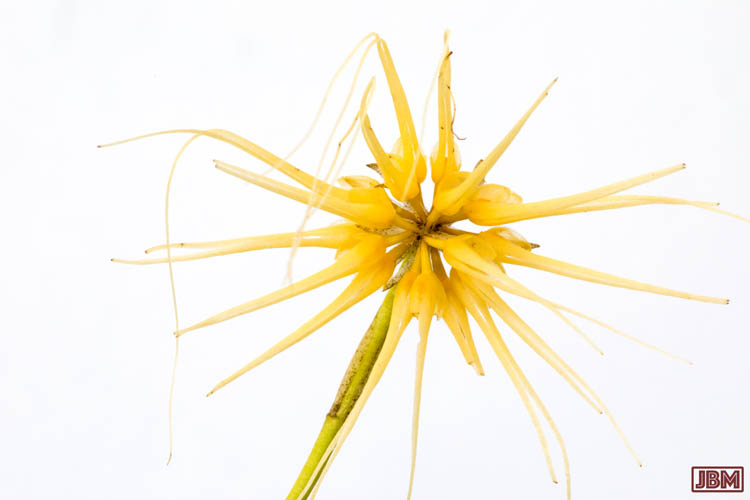 Bulbophyllum vaginatum – ‘The Vagina Bulbophyllum’. No I don’t know how it got that name.

Apparently, in Java, the tiny fruits of this orchid are boiled up with fruits from some other orchids, and used as a treatment for earache. 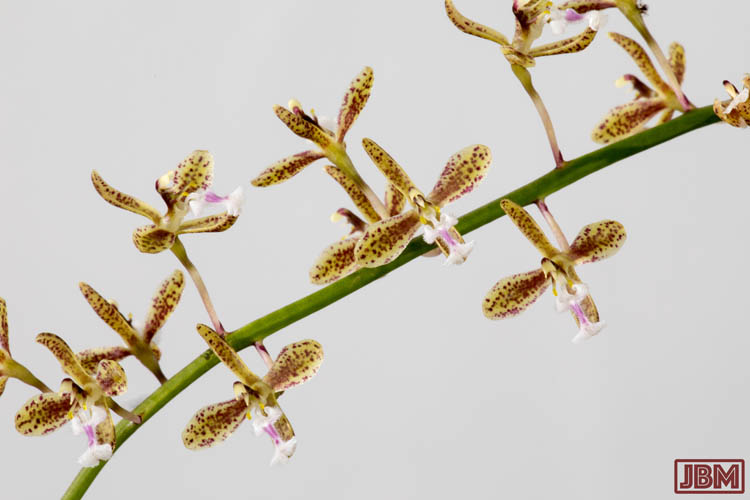 This lovely orchid is labelled as ‘Acriopsis sp.’. The name ‘Acriopsis‘ comes from Greek, and means it ‘resembles a locust’ – but I can’t see the resemblance myself…

The nine species in the Acriopsis genus are known as the ‘Chandelier Orchids’, and are native to various lowland forest locations from Assam to Queensland.‘Acriopsis’ is the genus, and the ‘sp.’ bit means that the precise species hasn’t yet been officially determined.

My confident Google-based opinion is that it is actually an ‘Acriopsis ridleyi Hook.f.’, ‘Ridley’s Orchid’ which is endemic to Borneo and Malaysia. 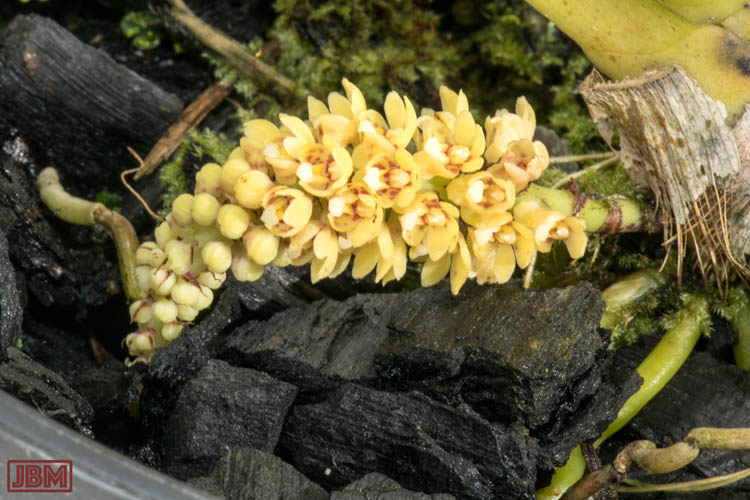 I love the language that orchid specialists (and other botanists) use to describe their subjects. Surely their vocabulary is incomprehensible to anyone outside their specialIst field? For example, see this description (from Flora of China) of the Pomatocalpa spicatum (pictured above):

No doubt that it is an accurate description, but it fails to do justice to the sheer beauty of the flower! 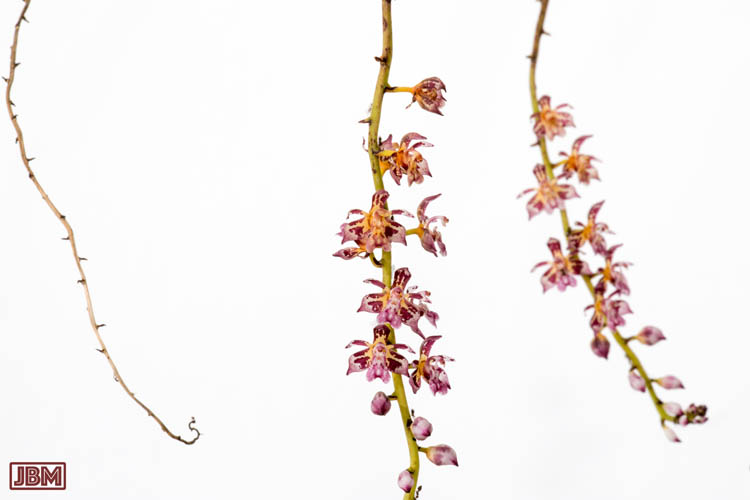 Thecostele alata (’The Winged Thecostele’), a lovely orchid which can be found from Northeastern India across to The Philippines, including East Kalimantan, where this one was collected for the Koleksi Anggrek (Orchid Collection). The individual blooms don’t last for many days, but they open successively, so they can continue to bloom for weeks or months.

For those who care about these things, it’s a ‘monotype’ i.e. it’s (currently) the only species in the genus Thecostele. 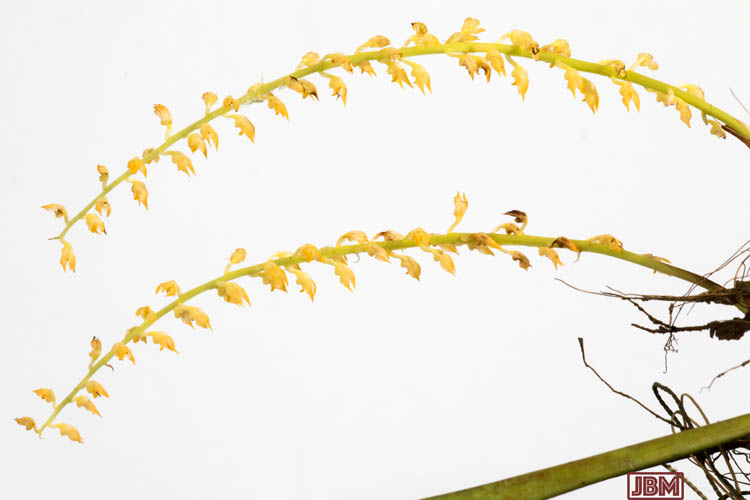 Bulbophyllum odoratum – ‘The Scented Bulbophyllum’. Here’s some useful trivia: this plant is just one member of the genera Bulbophyllum which, with over 2,000 species, is the second largest of all flowering plants. There’s over 600 Bulbophyllum species in PNG alone! The members of Bulbophyllum can be readily identified because of the “single-noded pseudobulbs, the basal inflorescence and the mobile lip”. Look out for that. 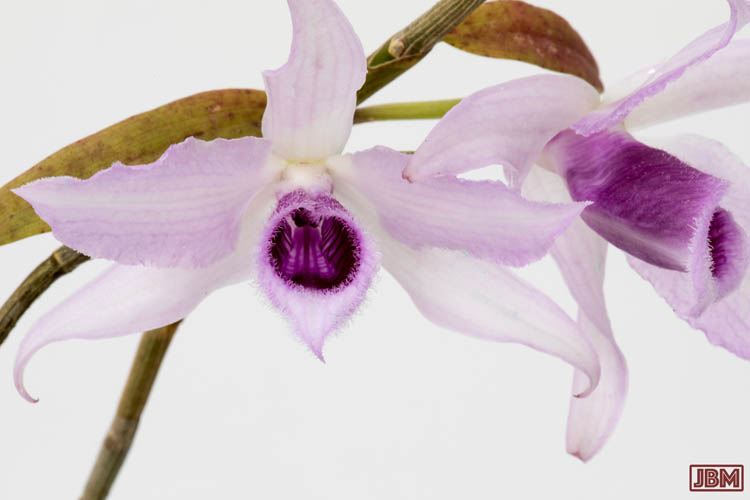 Dendrobium anosmum. This highly fragrant orchid is curiously named ‘anosmum’ – which means ‘without scent’. I like it better by its synonym ‘Dendrobium superbum’ – a name it was given because it is ‘superb’ – not in reference to its smell.

In Hawaii, where it is known as honohono, it is often used in the making of leis. 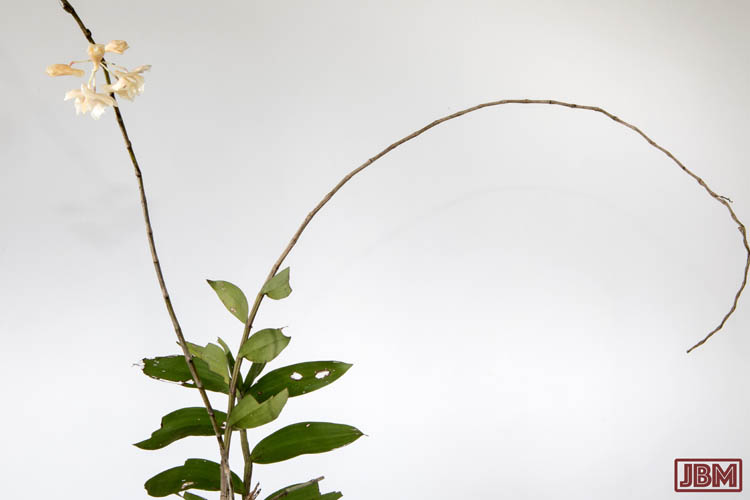 Dendrobium sanguinolentum – (The Blood-stained Dendrobium). There appears to be a couple of colour variations of this species, with one having flowers that are entirely pale yellow in colour. The ’standard’ ones have a little patch of crimson red on the tips of each petal, hence the ‘blood-stained’ name. 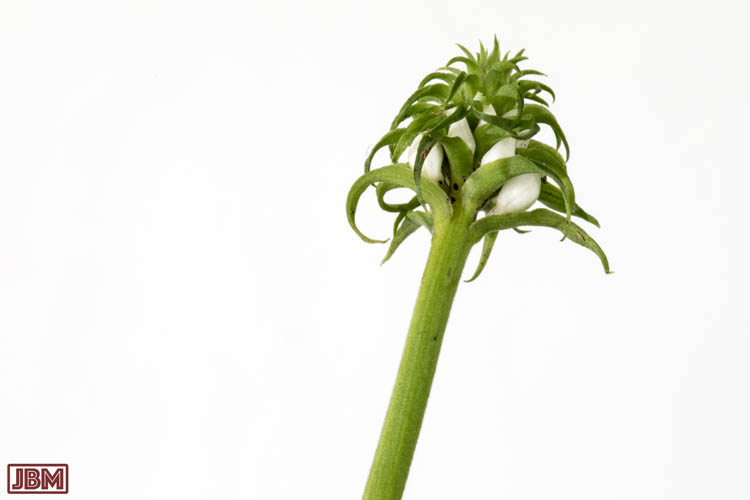 Calanthe sp. The ‘sp.’ in the name means that the Kebun Raya hasn’t yet obtained a definitive determination of which species it is within the Calanthe genus. There are over 200 species of Calanthe, distributed almost worldwide.

This one opens up to form a large spray of white flowers, but I actually like it even better before the ‘bulb’ of flowers opens up. Elegant shape, full of life, vitality and potential. 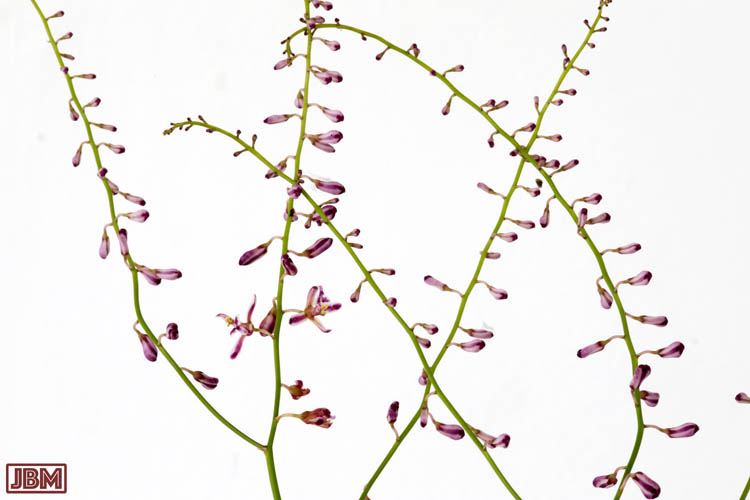 Acriopsis liliifolia. Another Acriopsis (‘Chandelier Orchids’), this one definitively identified as the liliifolia species – the ‘Lily-leaved Acriopsis’). It’s a lowland orchid, likes damp places, and blooms prolifically. The flower-stalks may branch several times, and have up to 200 flowers. Perfect dainty little blossoms.